Birds were critical factor in natural history of the islands 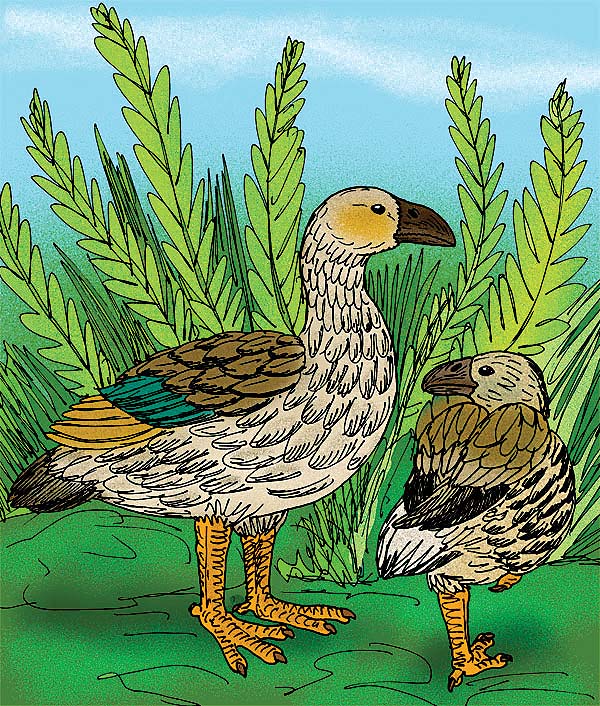 The Maui Nui Moa-nalo (left) was the largest of the grazing flightless ducks that once roamed the forests of Kauai, Oahu and Maui Nui eating leaves and ferns. -- STANTON FINK illustration

For millennia, before humans ever set foot in Hawaii, birds ruled the islands. From mountaintop to shoreline, the feathered filled the forests, grasslands, wetlands and shorelines. As the predominant animal of islands that lacked the land-dwelling reptiles (only sea turtles) and mammals (only bats) found elsewhere, birds adapted to fill a range of ecological roles. They were pollinators, predators and scavengers, seed dispersers, fertilizers and even the grazers on the landscape shaping the ecology and being shaped by geography and isolation.

Take the moa-nalo or “lost fowl,” named because they are only known from fossils found in caves and dunes. Moa-nalo are a group of flightless birds that lived in Hawaii for over 3 million years until humans arrived. They had large, massive turtlelike beaks, complete with teeth. Some species were as tall as a toddler and weighed up to 15 pounds. Forest dwellers, they were the grazers of the landscape, like the buffalo or deer of the Mainland, they used their oversized beaks to tear at leaves and spent their lives munching the understory plants and ferns.

Moa-nalo wandered the islands of Kauai, Oahu and Maui Nui but are not known from Hawaii island. On Maui, there are two species known from fossils found in caves: the Maui-Nui moa-nalo, the largest species in the islands, and the stumbling moa-nalo, a species that lived in the mountains.

The ancestors of the moa-nalo were dabbling ducks (ducks that feed on the surface of freshwater) that colonized the islands around 3.6 million years ago. At that time, the island of Oahu was the youngest in the chain, with Maui Nui and Hawaii island yet to be formed. As the Pacific Plate moved northwest, Maui Nui — first Molokai, then Lanai, Kahoolawe, and then Maui began forming. Exactly when and how giant flightless ducks reached Maui Nui, or whether they evolved to be flightless after they arrived, is unknown. At that time, sea level was lower and wetlands were prominent on the landscape of Maui Nui, attracting birds as they do today. Flightlessness could have been an advantage for the ancient birds, transferring energy reserves from powering wings to walking to take advantage of a plentiful plant resource, underutilized because there were no other grazing animals around.

Many of the plants that are endemic to Hawaii (found here and nowhere else) lack the chemicals and thorns that their ancestors may have had to deter grazing animals — take for example the akala, the Hawaiian raspberry, with only hairlike thorns when compared to a related invasive blackberry. But giant grazing ducks may have spurred some plants to defend themselves. Thirteen of the 20 species of haha (Cyanea) native to the islands have prickly fernlike leaves, though only when the plants are young and within about 4 feet of the ground — the reach of the moa-nalo. As the plants grow taller and out of the reach of the grazers, the leaves are full and spineless. 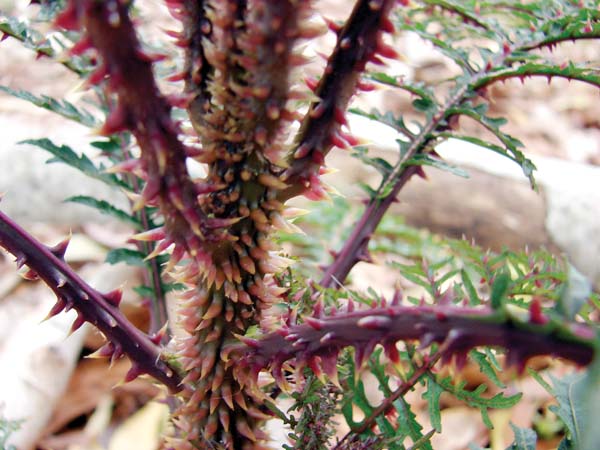 Though most plants in Hawaii do not have thorns, many species of Cyanea (haha) like this Cyanea duvalliorum from Makawao Forest Reserve bear formidable-looking defenses. Scientists suspect that the presence of moa-nalo influenced the evolution of these plants’ defenses. Birds have been a critical force in shaping the ecology of the Hawaiian Islands.-- FOREST and KIM STARR photo

Though plants may have evolved defenses from moa-nalo, these oversized flightless, ground-nesting birds were one of the first species to disappear when humans reached the islands — likely as meals for humans and the animals that came with them: rats, pigs and dogs. The moa-nalo are among 77 species of Hawaiian birds that have become extinct in the last 700 years, thanks to invasive species, disease and habitat loss.

There are still rare and unique bird species left in Hawaii — forest birds, shorebirds and seabirds that are both amazing in their own right and serve critical roles in ecosystem processes. Heroic efforts protect the remaining species. Here on Maui, many projects work to protect bird populations and nesting habitat through research and restoration. Among them are the Maui Forest Bird Recovery Project, Maui Nui Seabird Recovery Project, Maui Bird Conservation Center, Kanaha Pond State Wildlife Sanctuary and the Kealia Pond National Wildlife Refuge.

If you would like to learn more about birds in Hawaii and efforts to protect them, consider volunteering with one of these organizations.

* Lissa Fox Strohecker is the public relations and education specialist for the Maui Invasive Species Committee. She holds a biological sciences degree from Montana State University. “Kia’i Moku,” “Guarding the Island,” is prepared by the Maui Invasive Species Committee to provide information on protecting the island from invasive plants and animals that can threaten the island’s environment, economy and quality of life.