Tech in the Color Purple

The 2019 cohort at the Purple Prize Demo Day event, which was held last September at the Doris Duke Theatre in Honolulu, is shown. The Purple Prize is a six-month incubator program and competition that accelerates teams with ideas for innovative technology products to start and launch mission-driven companies that amplify community and regenerate Hawaii’s ecosystems. — MARLEY PARKER photo

Could Hawaii be the next Silicon Valley?

It’s not a stretch of the imagination when you see the promising technology startups that have emerged from the Purple Prize, a Honolulu-based indigenous innovation incubator and competition.

Among them are 3R Water, the developer of a data collection and analysis tool that identifies how much stormwater a property generates; Mana Studios, which created ‘Oleloflix, a crowdsourced platform for watching ‘Olelo Hawai’i (Hawaiian-language) movies; and Kuka, a mobile application that provides a secure platform for users to record and send video testimony to legislators.

Now in its fourth year, the Purple Prize competition is a program of the Purple Mai’a Foundation, a nonprofit organization that provides access to educational opportunities — including free after-school and elective coding and computer science classes — to Native Hawaiian students, low-income youth, and other underrepresented groups statewide.

In 2016, the nonprofit launched the Purple Prize to empower Hawaii residents to create impactful technology startups rooted in Hawaiian values. It is designed to help those with criteria-aligned projects fine-tune their idea, product or service and prepare for launch and future investment. As for the criteria, technologies and companies in the Purple Prize must be grounded in the local culture, history and physical environment; create net positive community and environmental impacts; and leverage hardware, software, algorithms and/or platform technologies. 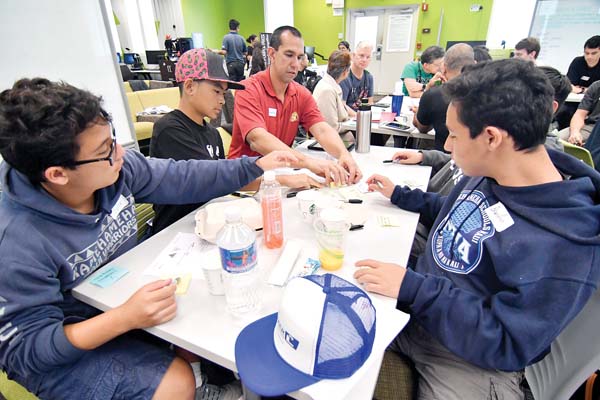 The Purple Prize selects highly motivated applicants, who are at a similar stage of development: idea to pre-market. While applicants must have a tangible idea that aligns with the Purple Prize criteria, they don’t need an entrepreneurship or tech background to qualify, said Purple Prize director and Lahainaluna High School alumnus Alec Wagner.

The intensive six-month program equips teams of varying sizes with the tools they need to successfully launch a business — they explore everything from prototyping and design to customer discovery to pitching and negotiation. Among other things, teams engage in one-on-one meetings with advisers, take part in cultural and community-building activities and are connected to mentors, investors and other resources.

And what’s the “prize” in the Purple Prize? At the six-month mark, the teams pitch their businesses to a panel of judges for a chance to receive funding and access to continued resources. Not only do the most successful teams (in this competition, there can be more than one winner) walk away with a monetary award, but they also receive ongoing incubation services, including mentoring, networking opportunities and continuing education.

The overarching goal is to give these innovators the confidence and conviction they need to launch a business, Wagner said. And there’s an ulterior motive: To help plug Hawaii’s “brain drain” by creating more opportunities here at home — and possibly position the Aloha State to become the next tech hub.

Since its inception, the Purple Prize has worked with more than 40 teams and has awarded more than $200,000 to those with the greatest potential. In its relatively short history, the program has seen its share of success stories and in 2019 alone, the Purple Prize helped more than 31 teams, of which more than a dozen built new technology products and six incorporated new companies.

This year’s program will run from April to September, and Saturday workshops will be held at Halau ‘Inana, a collaborative workspace in Honolulu. The 2020 Purple Prize will be capped at eight teams and the application process is now underway. Applications will be accepted on a rolling basis until March 28.

To apply, visit purpleprize.com/incubator. To learn more about the program, email Wagner at alec@purplemaia.org. For more information about the Purple Mai’a Foundation, visit www.purplemaia.org.