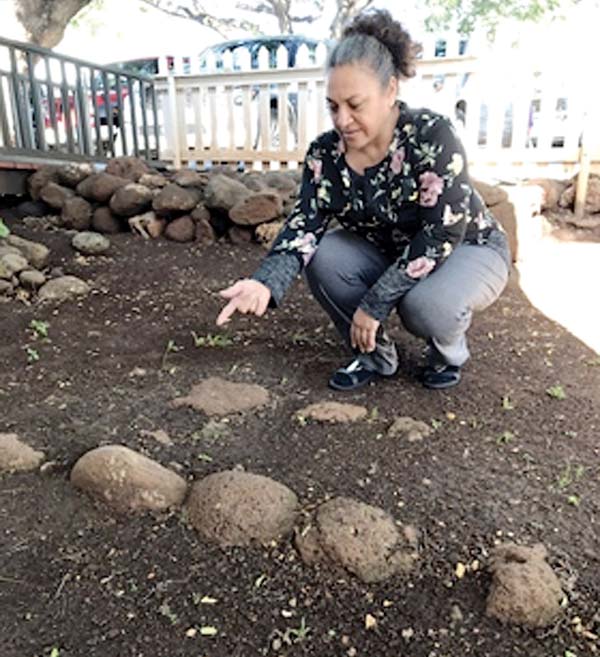 Etina Hafoka, docent at Baldwin Home Museum, points out stones set in a row that are presumed to be the foundation of the adobe cookhouse, which was located behind the mauka side of the Baldwin Home. — Lahaina Restoration Foundation photo

Digging is planned from Monday to March 27, 9 a.m. to 3 p.m., at the Baldwin Home Museum, 120 Dickenson St. in Lahaina. The public is invited to participate in the screening of the dirt from the excavation alongside lead archaeologist Ian Bassford, Maui island manager of Scientific Consultants Services Inc.

If the “archaeological dig can provide evidence of the cookhouse, we would like, ultimately, to reconstruct the cookhouse, so it can become part of our home tour, which would provide another window into the daily life of the Baldwin family — the food they ate, how they cooked and stored it,” foundation Executive Director Theo Morrison announced in a news release.

“We are hoping to find the stone outline of the foundation of the building, pili grass or some other filler, not grown nearby, that could have been used as a strengthener for the adobe,” She said. “Possibly a different soil sample with a high clay content that could indicate adobe.”

Considered the oldest standing house on the island, the Baldwin Home was built in 1834 of sand, coral and lava rock and is held up by timber frames, according to the news release.

The Rev. Dwight Baldwin and his family lived in the house from 1836 to 1868. There are references to an adobe — dried mud brick — kitchen in the backyard, which had fallen apart over time. But remnants of the cookhouse still could be lying beneath the ground.

“Mrs. Baldwin had eight children, six survived, and many guests daily — sea captains, other missionaries, travelers,” said Morrison, who heads the nonprofit. “I did not see how she could just have cooked outside over an open fire, which is what I had assumed.”

After research, Morrison found that Lahaina town had hundreds of adobe buildings.

“I also found a letter from Dr. Baldwin requesting a stove from the mission board for his cookhouse,” she said.

It was recently verified that a long straight row of half-submerged stones behind the Baldwin Home Museum were the same distance from the house described for the kitchen.

The Fred Baldwin estate deeded the Baldwin Home to the Lahaina Restoration Foundation in 1968, and through the decades, the Baldwin Home Museum has been restored to reflect a mid-19th century building.

Morrison said that they received a grant of $3,000 from the Sam and Mary Cooke Preservation Fund through the National Trust for Historic Preservation and administered by Historic Hawaii Foundation.