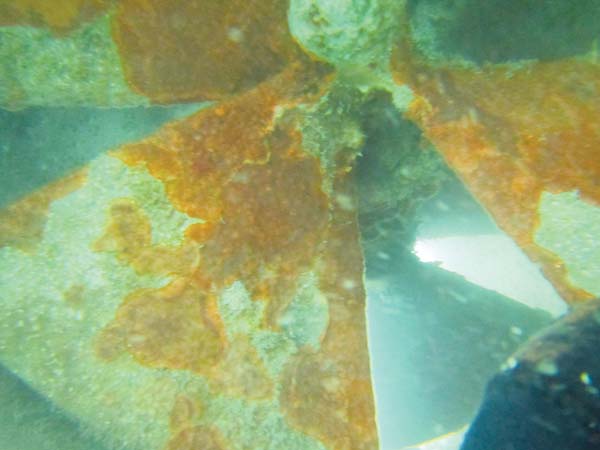 Biofouling, the build up of marine organisms on boat parts underwater, can affect any part of the vessel, including intakes and propellers shown in this photo. The orange-colored growth is not rust; it’s a marine animal called bryozoan (Watersipora subtorquata) that can develop colonies. — State Department of Land and Natural Resources Division of Aquatic Resources photo

Over 1,000 ships enter Hawaii’s ports and harbors every year. Coming from throughout the Pacific and Oceania, bringing cargo and vacationers to the islands. Below deck, they risk carrying stowaways — fragments of algae and other marine critters — on their hulls and in the ballast water. Moving throughout the world and between islands, boats inadvertently carry marine organisms from place to place. Some of these become invasive in their new habitat.

“Hawaii has the most non-native aquatic species of any place in the United States,” says Jules Kuo, the Hawaii Ballast Water and Hull Fouling coordinator with the Department of Land and Natural Resources. She works with boat owners and captains of all types of boats from large shipping companies and cruise lines that move globally to recreational and fishing boats hopping between islands to keep new nonnative species out and limit the spread within the state.

Hawaii’s marine environment, like the terrestrial environment, evolved in relative isolation. The nearshore reefs glitter with colorful coral, fish, seahorses, urchins and other creatures some of which live nowhere else in the world but Hawaii. In fact, Hawaii has the highest rates of endemic marine species: 18 percent of coral and roughly 20 percent of fish are found here and nowhere else. Important for tourism and residents alike, these reefs are threatened by an onslaught of species arriving from around the world. Once here, marine species can’t be fenced out or weeded.

New marine organisms can make it to Hawaii either by clinging to the hull of a boat or carried in ballast water. Warm temperatures and a lack of predators increases the likelihood that some species will grow unchecked and threaten reefs and human health. Researchers suspect at least one species of box jellyfish made it to Hawaii as an undetected hitchhiker.

A 2014 study identified dirty hulls as the main pathway for nonnative marine organisms arriving in Hawaii. According to Kuo, within hours of being in the water, ship hulls begin to develop a slime layer as bacteria build up on the hull. The longer a ship sits, the more slime it will develop. Slime is a drag, literally; it increases friction and fuel costs. But from the perspective of invasive species risk, slime is a foothold for other marine life — algae, sponges, barnacles, clams and more. 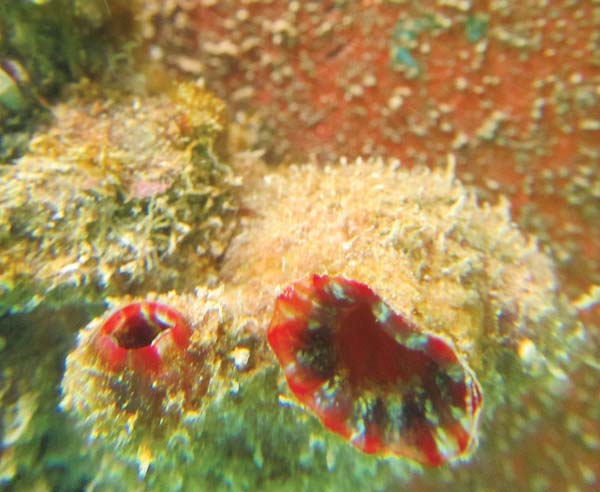 One person for 1,000 ships means Kuo can’t personally inspect every boat bottom and ballast tank so she’s developed a priority-setting matrix combining information about the ship’s port of origin, how long it was in port, and if species have been detected before to determine which boats to visit. She collects samples of ballast water and checks the hull for fouling, but most of her effort is spent working with captains and owners on the steps they can take to proactively prevent hull fouling and ballast water contamination: regularly cleaning the hull, using anti-fouling paint, and exchanging ballast water in the open sea, far from where algae and critters can be taken up.

“Initial introductions most often happen with commercial vessels, but recreational boats carry species throughout the state,” says Kuo. For example, the Mycale armata sponge, a conspicuously bright orange sponge from Australia in Kaneohe Bay and other harbors on Oahu, has spread to Kahului Harbor.

Kuo is trying to better understand what species are were introduced by installing autonomous reef monitoring structures (ARMS) in harbors statewide. The ARMS are PVC pipe attached to a plate that mimics coral habitat, Kuo then checks the stations every year to see what has shown up. She is also working with other states along the Pacific Ocean to provide education on simple steps recreational boaters can take to protect Hawaii’s marine environment. These include:

• Coating your boat. Use an appropriate anti-fouling coating for your boat.

• Clean before you go. Removing any biofouling and slime layer before traveling will increase fuel efficiency and reduce the accidental spread of marine organisms. Include the hull, propellers, rudders, and intake.

• Keep a logbook. This will help you maintain biofouling paint and maintenance schedules.

* Lissa Strohecker is the public relations and education specialist for the Maui Invasive Species Committee. She holds a biological sciences degree from Montana State University. “Kia’i Moku — Guarding the Island,” is prepared by the Maui Invasive Species Committee to provide information on protecting the island from invasive plants and animals that can threaten the island’s environment, economy and quality of life.