Realtors serve up food and kindness 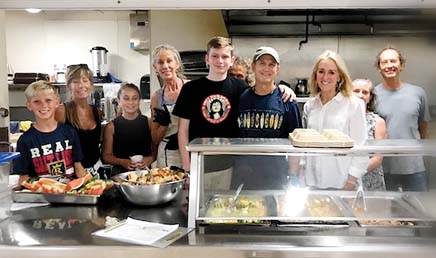 For the past 31 years, Debra Merle (third from right) has coordinated monthly Realtor-sponsored dinners at the Ka Hale A Ke Ola (KHAKO) Homeless Resource Centers Central Center in Wailuku. On the first Wednesday of every month, Realtors — along with their family members, friends and clients — purchase, prepare and cook meals for KHAKO residents. — Photo courtesy Debra Merle

On a sunny afternoon 31 years ago, a tradition began in an old Catholic church on the edge of a cane field in Puunene. That day, a group of local Realtors crowded into the church’s kitchen and cooked dinner for the men, women and children staying in the building, which had been converted into a homeless shelter by Ka Hale A Ke Ola (KHAKO) three years earlier. After dinner, the Realtors cleaned up and headed home. They did it again the following month. And every month after that.

“We’ve never missed a month,” said Upcountry Realtor Debra Merle, who started the tradition in 1989. “I am so touched by the number of people who want to help.” In fact, she’s lost track of how many volunteers have pitched in over the years.

“There’s too many to count,” Merle said.

On the first Wednesday of every month, the Realtors — often accompanied by their family members. friends and real estate clients — arrive at the Wailuku facility with armfuls of ingredients. They take over the KHAKO kitchen, where they do all of the prep work and cooking. Dinner is served cafeteria-style, and once the last resident finishes his or her meal, cleanup begins. 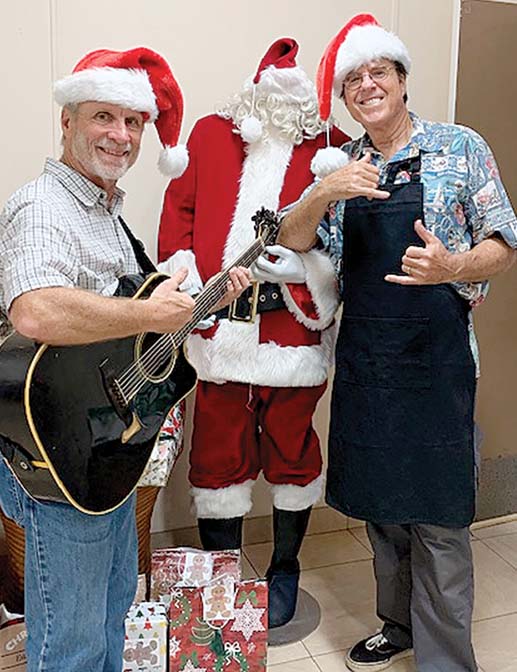 The dinners run like a well-oiled machine — and the same can be said for the behind-the-scenes planning. Every November, Merle sits down at her desk, opens her calendar and starts sending emails. Among those on her email list are former title company account executive Patrick Kilbride and Realtors Penni Egger, Ron Silva, Monica Starleaf and Cindy Warner. Each will choose a month (or in some cases, months) to organize. Then they assemble a team of volunteers, plan a menu, collect donations from their colleagues and shop for ingredients.

Warner has been volunteering at KHAKO for the past 20 years.

“It is always fun,” she said. “It’s a great team-building gathering for our agents. We often bring our clients, friends or kids to help, too . . . every time is heartwarming and gives a sense of making a difference in the lives of these amazing people in our community.”

Like Warner, Kilbride is a familiar face in the KHAKO kitchen — he’s been preparing and serving meals there since 2004. He says growing up in a food-insecure home inspired him to start volunteering 16 years ago.

“I know what being hungry feels like,” he said. “I wanted to be an angel for our Maui children because we had many living angels helping us year after year when we were children.”

Starleaf joined the volunteer roster in 2008.

“I started by donating money towards the dinner and then sometimes going to help prep and serve the food,” she said. “Then I committed to cover one dinner month per year, and now I’ve been handling three dinners per year.”

The menu changes every month, and volunteers go the extra mile to create a festive ambiance. In March, there’s a St. Patrick’s Day-themed meal. In May, it’s a Cinco de Mayo fiesta. In November, there’s a Thanksgiving feast with all of the fixings, followed by a holiday-themed dinner in December.

“We’ve had friends and agents come, who sing and play the guitar or ukulele to add a musical zip,” Warner said.

Coordinating the dinners can be logistically tricky at times, but Warner, Starleaf and Kilbride say it’s 100 percent worth it.

“I feel satisfied about making a small positive difference in people’s lives, and the folks at KHAKO always express their appreciation,” Starleaf said. Kilbride shares her sentiment.

“The smiles, the bright eyes, the verbal thank yous . . . those are priceless images that are stored in my brain,” he said.

The first Wednesday of the month is already spoken for, but there are other opportunities to help out at KHAKO. Starleaf encourages others to consider signing up for a volunteer shift.

“I always have a grateful, warm feeling in my heart when I leave,” she said.

In 1986, KHAKO opened the doors to its first facility in Puunene, where it sheltered, fed and clothed thousands of residents in need. In 1993, KHAKO began providing emergency food and housing to individuals and families in need at its newly built facility in Wailuku, Then, in 2005, the nonprofit opened KHAKO Westside Center in Lahaina.

Today, KHAKO is a comprehensive resource center that prepares families and individuals for permanent housing while providing emergency shelter, counseling services, addiction recovery management and adult education and training, as well as a primary care medical clinic and child care facilities. It also provides thousands of meals to men, women and children every year, which is why volunteers like Merle, Warner, Starleaf and Kilbride are so valuable, said KHAKO Executive Director Monique Yamashita.

“So many groups and families keep coming back month after month and year after year to make and serve food to our families and singles in shelter,” she said. “They are our major group of volunteers who are an important part of our services and have made an amazing amount of meals.” But most importantly, Yamashita said, “They have brought hearts full of compassion and caring for our guests, who always feel cared for and valued.”