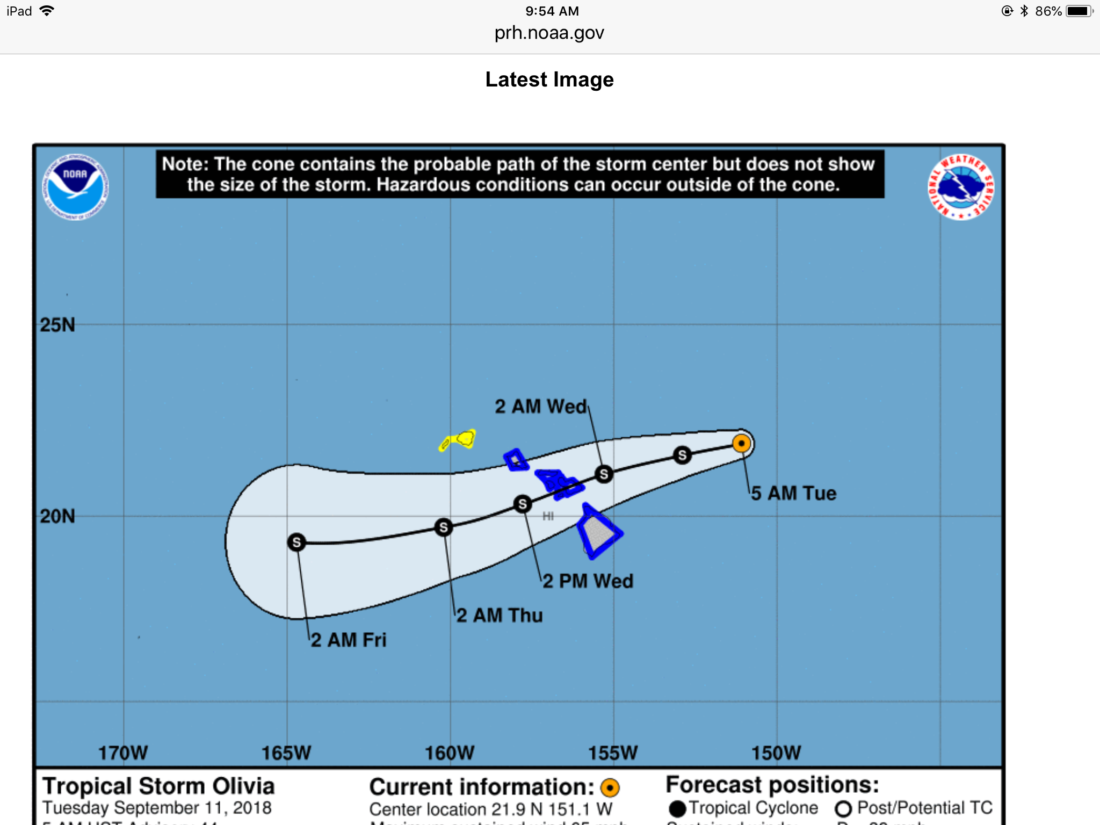 All public and charter schools and Maui County offices will be closed Wednesday as the county appeared to lie in the path of Tropical Storm Olivia on Tuesday. The entire state is under a Tropical Storm warning.

Gov. David Ige signed a memorandum granting all non-essential state employees in Maui County administrative leave. State offices will be closed Wednesday. State employees who are required to work include those who are disaster and emergency coordinators, disaster-response workers and others, including hospital employees and correctional officers. The state Judiciary will be closed Wednesday in Maui County. Second Circuit Court matters with a filing deadline for Wednesday were extended to Thursday by order of Hawaii Supreme Court Chief Justice Mark Recktenwald.

The University of Hawaii Maui College campus and all Maui County education centers were shut down at 4:30 p.m. today. All Tuesday night classes were canceled.

As of 11 a.m. today, the center of Olivia was located about 275 miles east of Kahului and 360 miles east of Honolulu. Its maximum sustained winds dropped slightly to 60 mph, and it continued moving west at 17 mph. Higher gusts have been recorded. Tropical storm-force winds extend out 90 miles from the storm’s eye.

“In order to give our families on Maui, Molokai and Lanai time to prepare, and with the early release time on Wednesday, we will be closing all Maui County schools and offices in anticipation of the storm’s arrival,” said schools Superintendent Christina Kishimoto.

The decision to close schools, which were shuttered for three days in August in anticipation of Hurricane Lane, was based on “the safety and well-being of our students and staff,” she said.

Smoking and drinking alcohol are not allowed at evacuation centers or in parking lots. All pets entering a pet friendly facility will need to be in a pet carrier or cage. Owners must provide food and water.

Shelter evacuees need to bring their own food, water and blankets. In case of a power outage at the centers, people should bring a flashlight or battery-operated lantern. The shelters are a last resort. People should try to stay with family and friends outside of hazard areas.

Queen Ka’ahumanu Center was set to close at 5 p.m. today, remaining shuttered through Wednesday and reopening on Thursday, the center announced. The Maui County bus stop at the center would stay open through 9 p.m. today for the Maui Bus.

However, the county shutdown means there will be no Maui Bus service on Wednesday. The Hana Bay and Keanae restrooms were closed as of 1 p.m. Tuesday to prepare for heavy rains. There will be no curbside trash collection and landfills will be closed Wednesday.

People are urged to conserve drinking water because high winds or flooding could disrupt power to underground water wells. A safe supply of drinking water is one gallon per person per day for 14 days. For water problems, call 270-7633.

People should have emergency kits ready in case they need to evacuate.

The U.S. Coast Guard set port condition Zulu for harbors in Maui, Hawaii and Honolulu counties. The highest-level danger condition applies to Kahului Harbor. It means that winds in excess of 39 mph are expected within 12 hours. Pleasure craft were ordered to seek sheltered waters. All ocean-going vessels and barges of more than 200 gross tones were ordered to prepare to leave port.

The Kealia Pond National Wildlife Refuge will close its visitor center and coastal boardwalk on Wednesday, and officials said they plan to reopen Thursday.

Maui News Circulation Manager Chris Minford said newspaper production was scheduled early because of the approaching storm. However, it’s possible some subscribers will receive their deliveries of Wednesday’s newspaper on Thursday, he said. The newspaper will be mailed to East Maui subscribers as usual, he added.

Rain began to fall over windward areas of the island Tuesday morning. Accumulations of 5 to 10 inches and 15 inches in some areas are forecast.

Strong winds and high surf are other impacts expected from Olivia. Maui County currently is under a tropical storm warning and high surf warning for east-facing shores until 6 p.m. Wednesday.

Olivia is expected to weaken a bit, buffeted by wind shear and island terrain, the weather service said. Still, the storm’s winds were expected to diminish only to 50 mph in 24 hours and to 45 mph in 48 hours.

The weather service also warned that while Olivia is forecast to be weaker than Hurricane Lane that passed through a couple of weeks ago, the impacts of Olivia could be “significantly worse” for some areas because it is passing directly over the islands.

The tropical storm-force winds are expected into early Wednesday morning with the possibility of hurricane force winds in some areas Tuesday night and Wednesday morning. Mountainous terrain can produce localized areas of highly enhanced winds, even well away from the tropical cyclone center, the weather service said.

The chance for flooding rainfall will increase rapidly Tuesday night and remain a significant threat through Thursday night, the weather service said. Much of this rainfall will be focused on windward areas of the islands.

Swells and surf generated by Olivia will continue to slowly build through Tuesday and reach damaging levels on some east-facing shores later Tuesday through Wednesday. Surf heights along east facing shores are expected to reach up to 20 feet across Maui County and the Big Island. This surf is expected to result in significant beach erosion and over wash onto vulnerable coastal roadways, particularly during high tides.

Haleakala National Park closed at 2 p.m. Tuesday. It would remain closed Wednesday. There will be no sunrise viewing Wednesday and Thursday. Park officials will assess the situation Thursday morning.