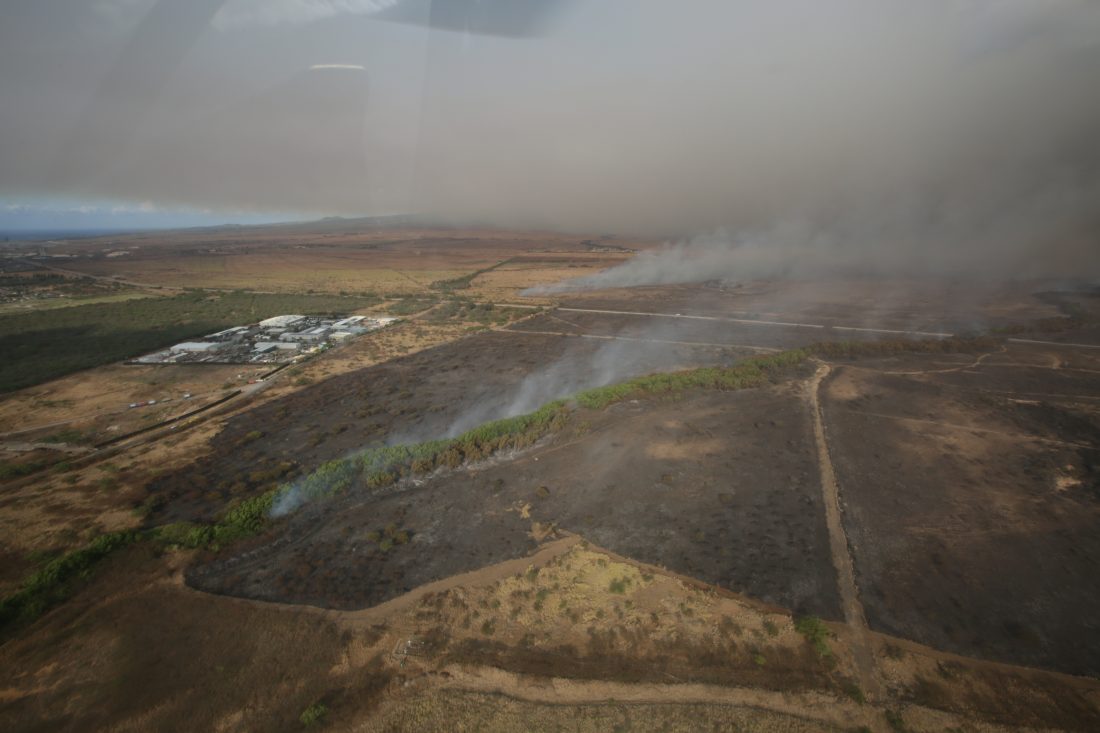 6:30 P.M. UPDATE: The Maui Fire Department has made significant progress containing the South Maui fire, which was 60 percent contained as of sunset Friday, the County of Maui reported.

The fire that began around Waiko Road has not grown from this morning and has burned a little more than 9,000 acres, according to preliminary GIS mapping.

Firefighters were concentrating on the perimeter of the fire, cutting firebreaks with bulldozers and dousing hot spots with water. 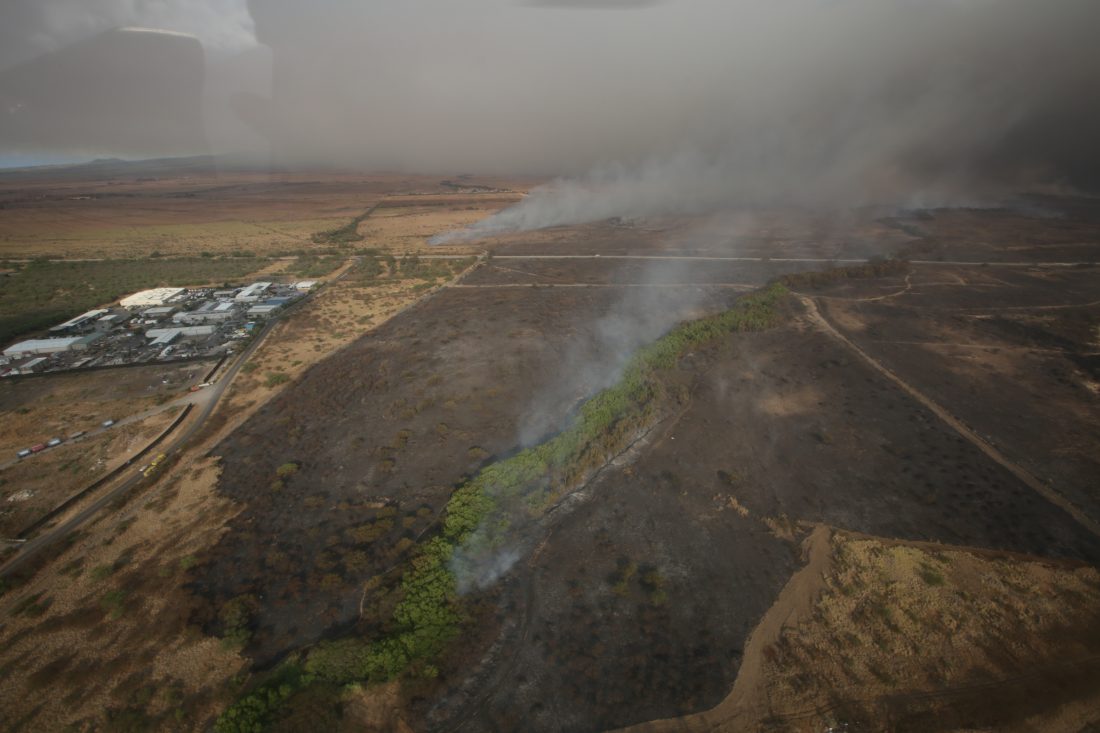 The aircraft will be back fighting the fire at first light Saturday, along with on-duty and call-back firefighters.

4:40 P.M. UPDATE: WAILUKU – The runaway wildfire that has scorched 9,000 acres in Central Maui and north Kihei since Thursday was 20 percent contained as of Friday morning but continues to move in a southeasterly direction, fire and county officials said.

Mayor Michael Victorino said at the news conference that during this morning’s flyover of the fire area that “most of the hot spots were out.” He reported that the fire did not appear to be moving.

Victorino estimated that the fire had burned around 12,000 acres that went from Waiko Road, past Maui Veterans Highway, halfway up to Haleakala Ranch and all the way toward Ohukai Road and north Kihei. 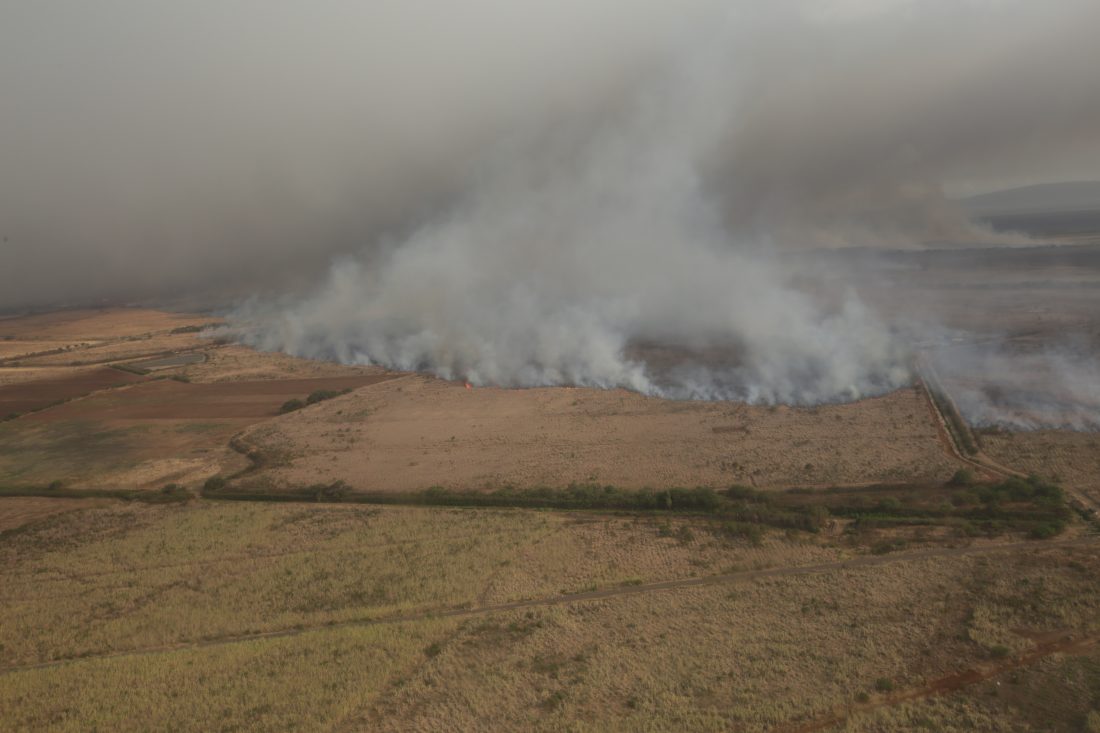 “It was quite extensive and quite a lot of burnt areas,” he said.

At a morning news conference, Victorino preached vigilance and warned that “we are not out of the woods in any way, shape or form.” He asked that visitors stay put at their hotels and enjoy the beaches nearby and that residents stay put too.

No calls for evacuations had been made Friday. Mandatory evacuations were ordered for north Kihei and Maalaea on Thursday afternoon.

Maui Electric Co. asked customers Friday to conserve power use between 5 and 9 p.m. due to damage by the wildfire to a transmission line running from the Maalaea Power Plant.

Currently, Maui Electric expects to have enough generating capacity to meet the evening peak demand, but “energy conservation by the public can help ensure sufficient power is available to meet that demand,” said MECO spokeswoman Sayble Bissen on Friday.

Power-saving suggestions include turning off or lessening use of air conditioners, delaying hot showers, laundry, dishwashing activities, and minimizing cooking until later in the evening.

“We thank our customers for their understanding and cooperation as crews make repairs,” said Mat McNeff, director of Maui County for Maui Electric. “This hot, humid weather is uncomfortable, and we understand that it can be inconvenient to cut back on electricity. We appreciate everyone’s help.”

At around 1:30 p.m. Thursday, the transmission line running from the Maalaea Power Plant to Kihei was damaged by the fire. Electrical service is currently being provided on a redundant line, Bissen said.

The Transportation Security Administration advised travelers flying out of Kahului Airport on Friday to arrive more than two hours before flight time. Security checkpoints may be overwhelmed because of canceled flights Thursday rescheduled for Friday, a TSA official said.

There were seven canceled or diverted flights from Kahului Airport on Thursday, said state Transportation Department spokeswoman Shelly Kunishige on Friday. The diverted flights originated from domestic airports and were rerouted to Daniel K. Inouye International Airport on Oahu.

The reason for the diversions and cancellations were primarily due to lack of road access out of the airport, she said. Several airlines canceled their flights because flight crews were unable to get to the airport due to road closures from the fire.

Maui police and National Park Service officials worked with airport officials to obtain escorts for flight crews from Kihei to Kahului so some flights could leave, she said.

“HDOT Airport staff worked tirelessly to ensure the safety and comfort of the passengers needing to stay on Maui overnight,” she said.

She added that the Maui District Aircraft Rescue & Fire Fighting Section joined the firefighting efforts, focusing mainly at the Maui Humane Society and then helping to fight the fire along Maui Veterans Highway.

The proclamation enables the state to provide “quick and efficient relief from damages, losses, suffering caused by the disaster, and to protect the health, safety and welfare of the people,” according to a Facebook post by the county.

“I am declaring our Valley Isle a disaster area for the purpose of implementing the emergency management functions as allowed by law. The emergency proclamation also authorizes the expenditure of state monies as appropriated to support speedy and efficient relief efforts,” said Ige.

The wildfire, fed by brisk winds, burned toward Maalaea and north Kihei, threatening the Maui Humane Society, which was evacuated, and north Kihei homes. The smoke and flames closed access to Kihei for several hours; Kuihelani Highway, Maui Veterans Highway and North Kihei Road were shutdown in the afternoon and into the night.

The Fire Department expected winds to pick up Friday and temperatures to rise above 90 degrees. The high temperature Friday of 91 degrees tied a record set in 1984.

Winds were expected to push the fire toward the east-southeast and possibly southerly, according to a county news release.

There were 23 Fire Department crews battling the fire along with 23 personnel from the state Department of Land and Natural Resources Division of Forestry and Wildlife, said Maui County Fire Services Chief Rylan Yatsushiro.

He added that there are three helicopters along with a National Guard Chinook helicopter all making water drops on the blaze. This is in addition to county fire, county Department of Public Works and private water tankers battling the fire on the ground.

Victorino said there has been no loss of any structures or injuries reported.

However, there have been reports of damage to Mahi Pono farm equipment and an old surplus truck brought and used by the Valley Isle Timing Association at the Maui Motor Sports Park to put out fires.

Rows of old Tournahauler tires along the motor sports park burned, leaving only metal, said Lenie Lawrence, safety officer for the Maui RC Modelers, which has a field at the park.

Most of the eucalyptus logs that surrounded the Maui RC Modelers field were burned, leaving ashes, and some logs were still on fire, he said. Kiawe trees in the area burned as well.

Around the fire perimeter site in north Kihei and Maalaea, small patches of smoke still could be seen Friday morning, even in the vicinity of the Maalaea Power Plant.

After the morning news conference, Yatsushiro said that isolated patches of smoke will be a common sight, which fire crews will monitor for flareups. The majority of the crews were focused on trying to keep the fire from spreading further.

He did not know if the fire had one front or multiple ones.

At the morning news conference Yatsushiro said the blaze has been a difficult one because of the weather conditions with the winds and the remoteness of the blaze. The record 94 degree heat Thursday did not help.

He explained that the dense, dark plumes of smoke observed Thursday shrouding Kuihelani and Maui Veterans highways could be due to the dense kiawe or abandoned vehicles burning.

“Hard to say at this point,” he said.

No determinations have been made about the cause of the fire, Victorino said. He made a reference to homeless people being a factor Thursday but said Friday that he wasn’t certain about the cause and that there were rumors going around.

Victorino said that at one point Thursday there were close to 2,000 people taking shelter at the three Red Cross run shelters or at the Kahului Airport, where 540 people remained Thursday night.

He added that hotels are at capacity according to the Maui Visitors Bureau.

“There are no rooms,” he said.

All emergency shelters have been closed. But the War Memorial Gym in Wailuku and Kamalii Elementary School in Kihei may reopen if conditions worsen.

Victorino also asked for patience if people cannot get through by phone to county offices at the Kalana O Maui building because the fire impacted fiber optics. He said Hawaiian Telcom expects full services to return soon.

Those calling 911 also may need to continue to call to get through, Victorino said.

Victorino said Friday afternoon that Hawaiian Telcom crews still were “having challenges” with the restoration of fiber optic cables.

Ann Nishida Fry, senior manager of corporate communications for Hawaiian Telcom, said Friday afternoon that the majority of its affected services were restored. The main locations of its damaged cable were near the Pvt. 1st Class Anthony T. Kahoohanohano Armory and near Kealia Pond.

Crews worked through the night to access the area as soon as it was deemed safe by officials, Nishida Fry said. They completed preparation work to replace damaged fiber cables spanning about eight poles along Maui Veterans Highway. Splicing was completed around noon.

If customers still are experiencing issues they can call toll free 643-6111 or file an online support request at www.hawaiiantel.com/Residential/Support/SubmitSupportRequest/tabid/1346/Default.aspx.

Regarding internet and phone issues with various companies, Nishida said that in emergency situations “there’s generally a lot of congestion, which can lead to some calls not completing.”

She added that depending on how cellphone companies and other service providers have configured their networks and traffic and where the calls are being placed, services could be impacted. She said specific providers would have more details.

There was no damage to the Maalaea Power Plant, but a pass of the plant Friday morning showed flames had gotten close. He said that one or two of the “generating capacity” turbines could be lost and still maintain power for Maui customers. Victorino said the Kahului Power Plant also could assist.

Kealia National Wildlife Refuge was closed Thursday and Friday due to the fire. Refuge biological science technician Suzanne Conlon said Friday morning that so far the refuge office and visitor center as well as maintenance area were spared.

But as of mid-morning Friday, officials still were assessing the impact to the refuge, she said.

Areas around the refuge visible from Maui Veterans Highway were blackened from the fire. At the Maalaea mudflats, smoke still billowed in the air from inside the refuge Friday morning.

Pets, volunteers and Maui Humane Society staff spent the night at Maui High School on Thursday because they had not been given an all clear that it was safe to return to the shelter in Puunene that was threatened by the fire. Around noon Friday, there were more than 30 people at the school, according to the humane society’s Facebook page that asked for donations of sandwiches for more than 30 people.

Overnight the Mayor’s Office brought sleeping cots, and the public also brought supplies and even lighting to the site.