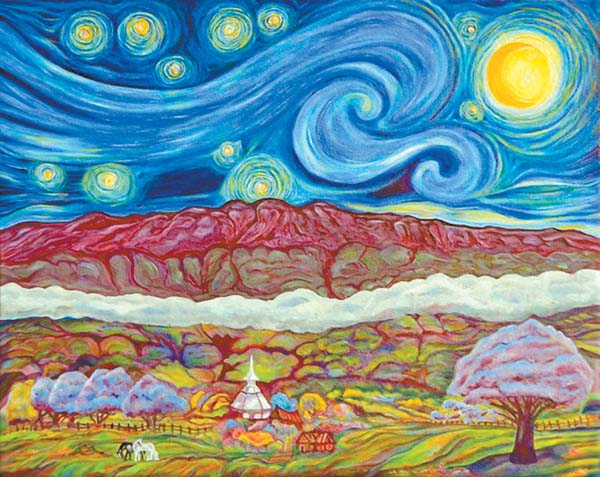 The painting welcomes the arrival of spring with the colors of Upcountry and a starry night sky, the news release said.

The gallery’s website is www.rachaelrayart.com. The gallery is located in the Dairy Center, 395 Dairy Road.

Island auto sales down in 2018

Purchases of light vehicles on Maui dropped 9.8 percent in 2018 compared to 2017, according to the “Hawaii Auto Outlook” produced by the Hawaii Automobile Dealers Association.

There were 6,557 new retail light vehicle registrations in 2018. The light truck market ticked up 4.5 percentage points to three-fourths of new registrations.

Toyota remained the top-selling brand on Maui with 25.7 percent of the market, followed by Honda at 18.7 percent, Nissan at 8.8 percent and Ford at 8.4 percent.

Dr. Jeffrey Chester has expanded his staff and days open since acquiring Akamai Recovery Maui in Kahului in August.

The doctor of osteopathic medicine and board-certified addiction medicine physician has been practicing on Maui since 2002. Chester has added 10 staffers, including a program director, an on-staff clinical neuropsychologist, a licensed marriage and family counselor, certified substance abuse counselors, a board-certified addiction medicine specialist, registered nurses, a conflict resolution and crisis prevention specialist and a culinary consultant.

Akamai Recovery now is open six days a week, and Chester has a goal to be open every day.

Through a grant from the Substance Abuse and Mental Health Services Administration, Chester has been giving talks to the community about addiction. Topics have included medication-assisted treatment for opioid and other addictions, preventing addiction through thoughtful prescribing controlled substances, and the use of Narcan, a nasal naloxone for treating an opioid overdose.

Coconut’s Fish Cafe in Kihei was recognized for having the best taco in Hawaii, according to The Daily Meal.

“The fish taco is a work of art,” according to the article published in The Daily Meal, a source for recipes, travel and food news.

According to the article, the state-by-state list was compiled from an earlier listing of the Top 75 Tacos in America. From there, The Daily Meal researched for the highest quality ingredients, skill in preparation and authenticity, a news release from Coconut’s Fish Cafe said.

Michael Phillips founded Coconut’s Fish Cafe in 2009 in Kihei. It will celebrate its 10-year anniversary in April and has Maui locations in the Azeka Center and Kamaole Plaza. Coconut Fish Cafe also has locations on Kauai and in California.

Mystery Maui, owned by Deron and Kit Furukawa, is located on the second floor of 81 N. Market St. in Wailuku. They said the concept of escape rooms started from video games in Japan around 2008, and the industry has spread worldwide.

“About 90 percent of our customers — both locals and visitors — are first-time players,” Kit Furukawa said. “All ages enjoy the games, especially because groups are given the opportunity to showcase teamwork in finding clues and solving puzzles.”

To celebrate the first anniversary, the escape room is offering discounts on its social media pages in March. For more information, go to www.mysterymaui.com.

The new website features improved functionality, content and easy access to information to help guests book a flight. There is direct access to the booking system with specific departure windows as schedules are updated and reservation confirmations.

Visitors to the website can easily view tour offerings across multiple islands with the site’s in-flight images and video experiences. Blue Hawaiian’s new website will be updated on a regular basis with news of tour launches, partnerships, photos, videos and reviews.

To accompany the website launch, Blue Hawaiian has developed a video series produced from hundreds of still photos and hours of video footage. The “Island Story” series not only offers a sneak peek into tour offerings but also highlights personal stories from company pilots.

The rankings included “Best Maui Hotel or Resort with the Aloha Spirit” as well as food, staff and pool categories.

Its sister property, The Plantation Inn, was named the No. 1 “Best Maui Bed & Breakfast or Inn.”

“What an immense honor to receive numerous awards from the readers of Hawaii Magazine,” said Mike White, general manager at Ka’anapali Beach Hotel.

The Hawaii Magazine Readers’ Choice Awards, which appear in the March/April issue, are based on reader surveys conducted by the magazine. Thousands of Mainland, Hawaii and international readers participated in the 98-category survey, rating everything from the best Hawaiian hotels and resorts, bed-and-breakfasts and inns, beaches and activities to the best places to eat, scenic road trips, fashion designers and coastlines in Hawaii. The magazine tallied the picks of more than 200,000 surveys.

Johnny Was at Whalers Village

Johnny Was, a women’s apparel store with locations nationwide, will be opening at the Whalers Village in Kaanapali on Friday, store Manager Luana de Teves said.

There will be a conch sunset blessing ceremony and treats and drinks, said de Teves.

* Local Business in Brief is published on the second Monday of the month and welcomes news releases and announcements regarding businesses in Maui County. To submit material or for more information, contact citydesk@mauinews.com or (808) 242-6343.