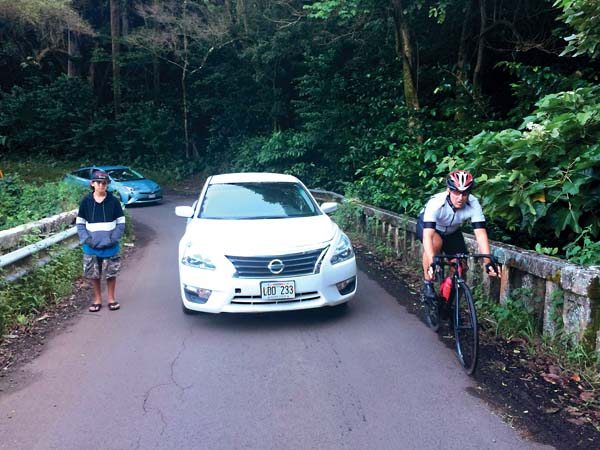 Haiku resident Saelyn Luskin, 13, stands on a narrow portion of Haiku Road this week. At the same time an anonymous bike rider passes a car along the shoulder of the road. Father Ryan Luskin took the photo to show how narrow Haiku roadways are and how dangerous it is for pedestrians and bike riders. Ryan Luskin and the Haiku Community Association are asking Maui County and area landowners for help and guidance in possibly establishing a bike and pedestrian pathway. RYAN LUSKIN photo

HAIKU — Some Haiku residents are seeking help and guidance from county officials and landowners to establish a pedestrian and bike path to link Haiku’s two commercial centers — the old Pauwela and Haiku canneries.

Leading the charge is Ryan Luskin, who said there’re no safe routes for residents to walk or bike through because roads are too narrow or without sidewalks. Children are unable to walk to school, unlike the old plantation days, and there are more cars on the road.

Luskin, who lives next to the old Pauwela (Libby) Cannery, said: “The opportunity is to create a path that promotes physical and mental health, supports small business, helps low-income families who might not be able to afford a car have access to goods and services, enables kids a safe route to access youth organizations, and leaves a smaller carbon footprint on the planet.”

Luskin, a member of the Haiku Community Association’s Transportation Committee, has gathered around 400 signatures from people who support the idea. (The petition can be found at change.org by searching for the word “Haiku.”)

The signatures will be presented to Maui County department officials, a representative from Council Chairman Mike White’s office and officials from Alexander & Baldwin, the landowner of property sought for the pathway, Luskin said.

He will meet with them on Monday.

So far, county officials are open-minded about the idea.

“I have heard from many constituents who desire a more walkable and bikeable community, and this may be an opportunity to meet this goal,” said White in an email. He holds the council residency seat for the area. “Making this a reality will take work, negotiating with landowners along with resolving maintenance and liability issues. However, we must start somewhere, and I am confident if the community makes this a priority, it can become a reality.”

White will not be able to attend the meeting due a conflict in schedule, but will send a representative from his office.

County spokesman Rod Antone said the county “will look at any community proposal.”

Luskin said the community association’s Transportation Committee will ask leaders and landowners to evaluate options initially for a pathway connecting the old Haiku Cannery on Haiku Road with the Pauwela Cannery on West Kuiaha Road. Historically, there was a path that linked the two canneries, he said.

According to a map of tentative paths that could connect the canneries, the pathways would bisect Kauhikoa Road, Hog Back Road and Mopua Street, all roadways that lie between the two canneries.

The path could extend to Haiku Elementary School on Pauwela Road, the private Roots School along Haiku Road and the Haiku Boys and Girls Club on Hana Highway.

Luskin said the pathway could include already-established roads such as Haiku Road and Kauhikoa Road and/or include lands owned by Alexander & Baldwin and its subsidiary East Maui Irrigation.

Using a combination of roads and property would probably work best, he said.

He added that perhaps Haiku Road at gulches and other areas could be widened to allow for pedestrian and bike access.

Luskin said at some places in Haiku there’s nowhere to walk even along the roadways, and a pedestrian would “have to dive in the bushes” if cars come by.

As far as who would foot the bill, Luskin said “that’s always the challenge.”

But he noted that in September the county acquired more than 250 acres near the world-famous “Jaws” surf break in East Maui for nearly $9.5 million.

The funding was provided through a county special fund, and similar funding could be found for the Haiku path project, Luskin said.