Funds would be used to hire staff, improve services before transfer 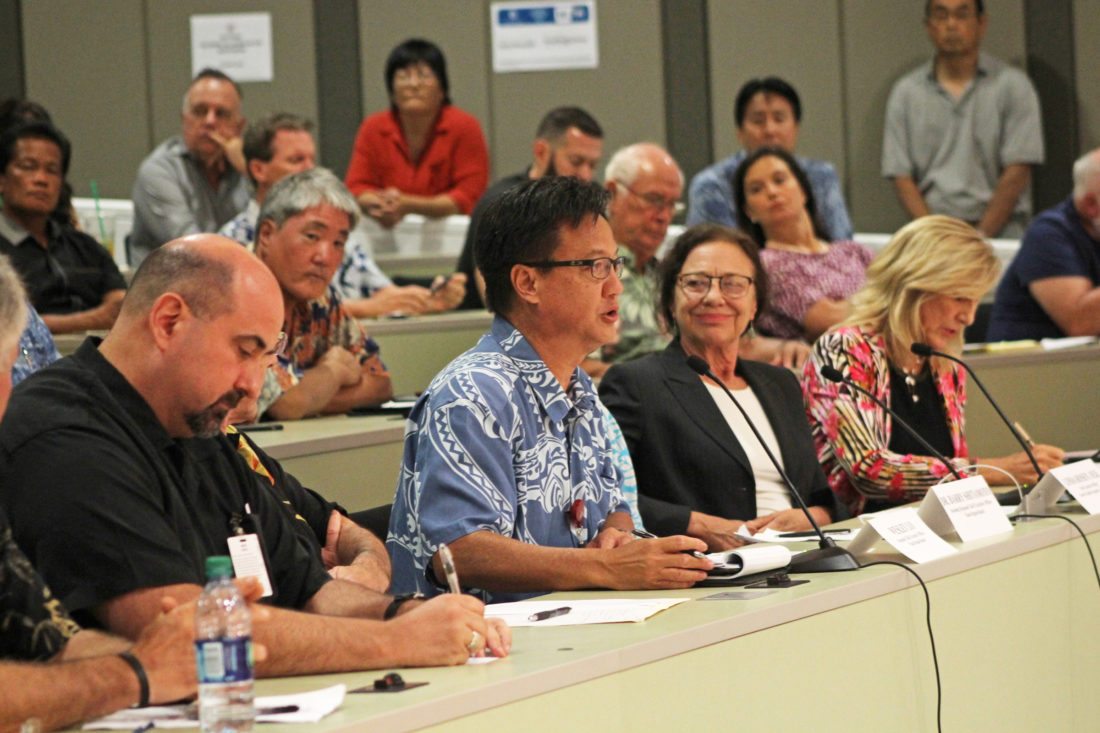 KAHULUI — Officials with Maui County’s three public hospitals asked state legislators Monday for $5.65 million to hire additional nurses and doctors as part of a new plan that they hope will improve gaps in staffing and services through July 1, 2017, when operational control of the hospitals will be transferred to health care provider Kaiser Permanente.

“We’re taking the attitude that we want to get back on track,” said Wes Lo, outgoing chief executive officer of the Hawaii Health Systems Corp. Maui Region, which currently runs the hospitals. “It’s time for a virtual transition now as opposed to waiting till July 1.”

Lo and other hospital administrators outlined their plan during an informational meeting with nine Maui and Oahu legislators at the University of Hawaii Maui College. A standing-room-only crowd, eager for an update on the long-awaited transfer, packed the room. Some people hung signs on the back wall pleading with lawmakers to “find a solution now.”

Kaiser was supposed to take over operations at Maui Memorial Medical Center, Kula Hospital and Lanai Community Hospital on July 1. However, due to a union lawsuit and other legal issues, the transfer has been pushed to July 1, 2017.

Late Friday, Gov. David Ige signed a supplemental agreement with the Maui Region’s largest union, the Hawaii Government Employees Association, which he had mentioned as one of the major remaining steps toward the transition. However, hospitals officials said there are still many hurdles and that July 1 will likely remain the transition date.

“We no longer want to believe or to be optimistic in thinking it can happen sooner than that,” said Avery Chumbley, HHSC Maui Region board chairman. “We realize how difficult it’s going to be.”

In the meantime, Chumbley said that the hospitals will concentrate on “making sure the next eight months are covered.”

Previously, officials had discussed cutting beds and services. However, the new contingency plan, if approved by the board, may mean that this won’t have to happen, Lo said. Dr. Barry Shitamoto, the incoming CEO of the Maui Region, who will takeover Nov. 1, explained that the plan is to “mitigate patient safety issues by placing care directly at the bedside.”

Shitamoto said this means hiring 55 nurses and other staff at Maui Memorial Medical Center. Because of the transition, many experienced employees have retired or left, leaving certain shifts with less-experienced workers. Another part of the plan is to enroll junior nurses in training programs over the next six months so that when the transition occurs, experienced staff will be spread out across all shifts, Shitamoto explained.

The plan would also allow for the hospitals to contract with Kaiser to recruit physicians in key positions, including a neurosurgeon and trauma and orthopedic surgeons, as well as advanced practice registered nurses to help staff the intensive care unit 24 hours a day, seven days a week.

“I have confidence in this plan,” Shitamoto said. “Additional staff will get us through July.”

He quoted an attorney friend of his, who has called Maui Memorial a “damn good hospital.”

“I want everybody to say that also,” Shitamoto said.

The cost of 55 additional employees will not to exceed $2.65 million, and the remaining requested $3 million is for the early hire physicians, Lo said. He explained after the meeting that officials focused on staffing at Maui Memorial because issues at the other two hospitals can be fixed internally and don’t require asking the Legislature for help.

Sen. Jill Tokuda, who chairs the key Senate Ways and Means Committee, said that emergency appropriations could take awhile and asked if the hospitals could start hiring with the money they had on hand. Lo said that the hospitals had both the authority and the funding to do so, but that they would “need (the additional money) at some point” to help close operations once Kaiser takes over.

House Speaker Joe Souki wondered what was delaying the transition now that a supplemental agreement has been signed with HGEA. A agreement was reached in early September with the other union, the United Public Workers.

Mary Ann Barnes, president of Kaiser Permanente Hawaii, explained that some employees will want to stay on the state payroll because it puts them closer to retirement and pension, so Kaiser would have to lease those employees back to the state. Once Kaiser knows how many employees that will be — which Barnes said it should know soon — then Kaiser can begin outlining things, such as work rules and paid time off, with employees.

Rosen added that HHSC had not signed the agreements because neither it nor Kaiser is satisfied with it yet.

While the HHSC and Kaiser have given input, Ige said at a recent meeting that the agreements are between the union and the state, and that he didn’t see a role for Kaiser in negotiations at this time. To Tokuda and other legislators, it seemed odd that Kaiser and HHSC had not been involved.

“What we’ve all wanted to do from Day 1 is to lock you all up in a room and say you’re not leaving until you have a solution,” Tokuda said to laughter and applause from the crowd.

In the meantime, legislators expressed support for the plan.

“Right now, it seems like the main thing we needed was certainty of the (transfer) date,” Central Maui Sen. Gil Keith-Agaran said. “The plan presented tonight will get us there.”

After hearing what hospital officials had to say, West and South Maui Sen. Roz Baker said that she didn’t see any legal or legislative barriers to the what the hospitals wanted to do.

“I think it’s a good plan,” Baker said after the meeting. “It’s possible for us to accomplish it, and I’m hoping that everybody will finally come together and make sure that we do transition July 1.”