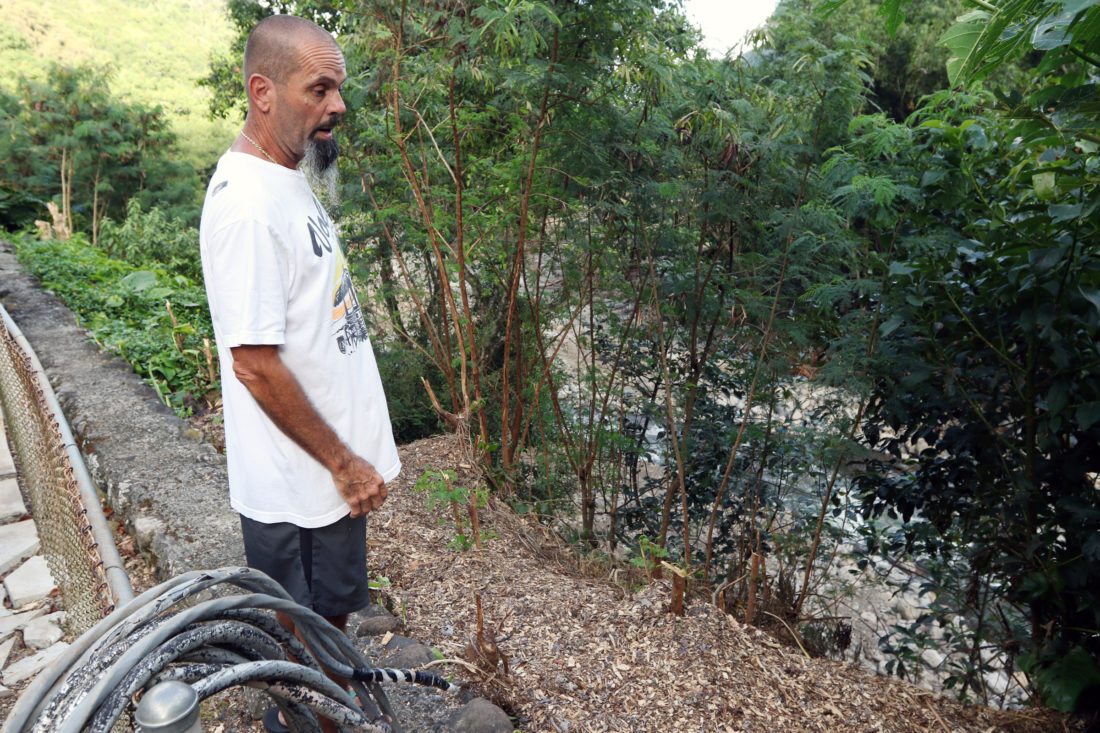 Iao Valley resident Charlie Pico on Thursday looks down the side of his property that was damaged by Wailuku River’s raging floodwaters last month. The Maui News / CHRIS SUGIDONO photo

IAO VALLEY — Several Iao Valley residents living along the Wailuku River, who describe themselves as “the lost seven,” fear their properties and road may erode away if emergency repairs do not begin soon, but it is unclear who  ultimately will pay for the work.

Homeowners along South Kukui Place near the Kepaniwai bridge recalled watching Sept. 13’s torrent rush through the valley and flood and damage Kepaniwai Park upstream and homes downstream. The damage to the homes and the park garnered publicity and visits by Gov. David Ige and U.S. Rep. Tulsi Gabbard, but the plight of those on South Kukui Place has gone relatively unnoticed.

“We’re like the lost seven,” resident Charlie Pico said Thursday, referring to the seven properties along South Kukui Place. “We’re above the river so we didn’t get flooding, but we got massive erosion.”

Walking to the river’s edge along his property, Pico pointed toward the side of a steep embankment with broken trees and debris. He said that the flood rose up the side of the bank and eroded a portion of it along with 20 to 30 feet of vegetation that had acted as a buffer.

A wall along his property built in the late 1950s to early ’60s had been crumbling over the years, but a portion of it was missing last week. Pico said that the wall was undermined by the flood. A bank extended out less than 10 feet from the wall — then there was a 90-foot drop. 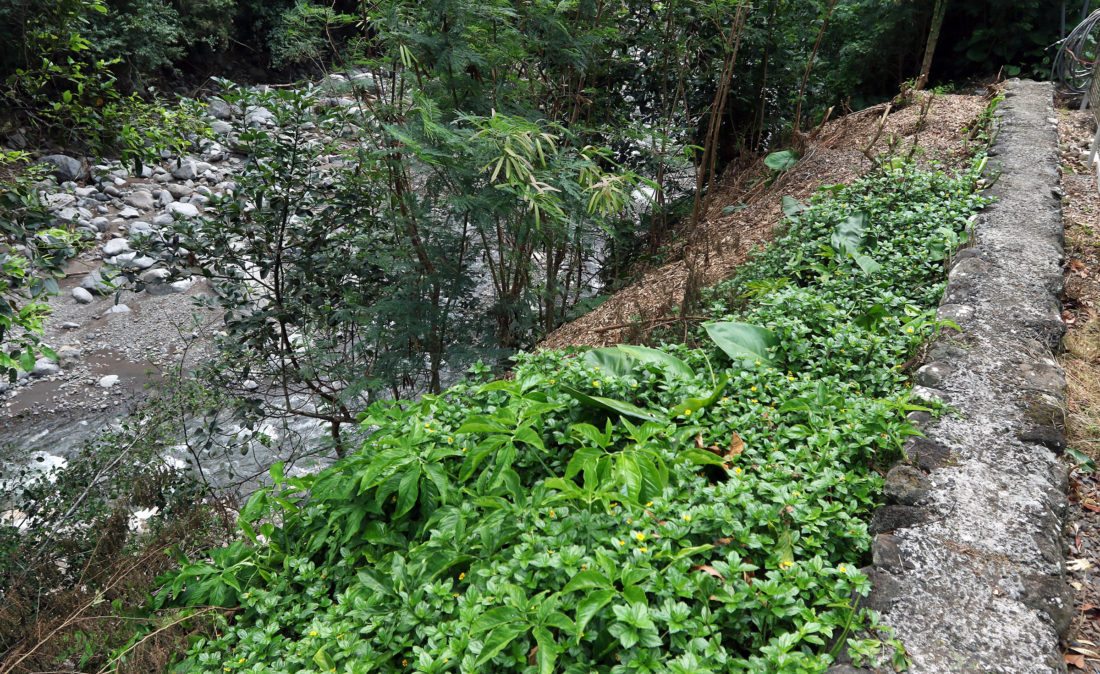 Floodwaters rose up alongside the banks of Iao Valley resident Charlie Pico’s property, sweeping away trees and other vegetation that acted as a buffer. The Maui News / CHRIS SUGIDONO photo

“All the talk has been about helping everybody and my thing is we’re the only ones that no one is even thinking about,” he said. “We took an impact on erosion. I get nightmares, waking up that my embankment is going to go ‘whoosh’ — gone.”

Next-door neighbor Victoria D’Auteuil said she has similar concerns and pointed to her house and a bedroom that overlooks the river. She fears that erosion from the river and future floods could jeopardize her home.

“I sleep right there, and it’s cutting into the bank. Do the math,” she said.

Resident John Duey estimated that he lost an acre of his land in the valley due to erosion from the flood. His family owns about 18 acres in the valley, with much of it along the riverbed. Duey said that about a dozen of his family members live on the property and that his grandson lost the most land. He said his grandson’s wife escaped the property holding their young child just before it was flooded.

“The baby was screaming,” Duey said. “If she had stayed another five minutes it could’ve been bad.”

Maui County spokesman Rod Antone said he has received calls from residents in the area asking what the county will do or can do about the riverbank. He said that the county is “very limited in what we can do for private property.” While the river itself is a public resource, the land is privately owned.

County Public Works Deputy Director Rowena Dagdag-Andaya acknowledged that the county does not technically have to pay to shore up the riverbed, but department officials had planned to talk to county budget officials Monday to see if the county could foot the bill through existing funding.

She said that department officials met with U.S. Army Corps of Engineers officials Friday, and they agreed to “provide technical assistance regarding the embankment and other potential life safety issues.”

A team of engineers plans to assess the area over two days next month to create an action plan, prepare a map and issue a final report. Dagdag-Andaya said that the department also would like to have a better understanding of the riverbed upstream of the Iao Stream Flood Control Project, which the county owns and maintains. The project, built in 1981, protects residents and businesses in the Wailuku area with a series of levees.

Dagdag-Andaya said that the county has not conducted a hydraulic analysis and does not have the expertise to generate a report. “The Army Corps will put together a scope, and we’ll need to find the funding for that work,” she said.

Some residents have taken matters into their own hands and have moved debris to protect their properties.

Duey admitted that his family used an excavator to protect his grandson’s property where it had eroded 80 feet with the river coming within 10 feet of the steps to his house. He said at least two other excavators were in the riverbed at other properties.

“We had no choice but to get the water away from our property,” he said. “What would you do if it was your property? Would you stand by (waiting) or do something? You have to protect your property. I think everybody would do the same that we did.”

Duey said that his family has applied for an after-the-fact permit with the Army Corps, which regulates work in riverbeds. Landowners are allowed to perform debris removal in the riverbed but cannot place material or relocate the stream without a permit, said John Smith, a county engineer.

Duey said that he used his own money to pay for the work, but online fundraisers have assisted other residents. He said he has received little help from the county but is working with officials to give workers access to the river through his property.

“It’s been five weeks now, and we’ve had nothing on our property except what we’ve done ourselves,” he said. “I’ve got high hopes that the county will do something, but we won’t know until a week or so.”

Other issues residents raised include the loss of water pressure in their lines, which plummeted after the flood.

“Ours is like trickling,” Pico said. “It takes like an hour to take a bath. I never wash my car.”

The ending of police presence and the roadblock at the entrance to Iao Valley Road also concerns residents, who are worried about their streets being flooded by tourists and locals hoping to see the damage at the park and to the riverbed. The county had planned to remove the checkpoint but about a dozen residents pleaded for its continuation.

“Every Tom, Dick and Harry is going to be up in the valley,” Pico said. “They’re going to come all the way to the park and the gates going to be closed, but that’s when you’ll have a thousand people over here blocking our road, and we’re not going to be able to go in and out.

“They just get no compassion for us guys up here. It’s just ridiculous.”

Antone said the county cannot have a police checkpoint “indefinitely” but would extend the presence for “at least another couple of weeks and revisit it again.”