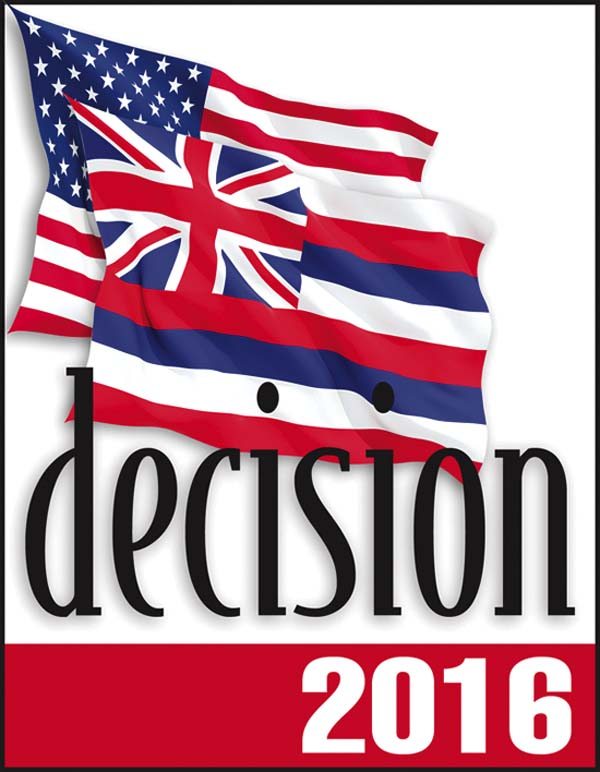 DECISION 2016 Editor’s note: This is another in a series of feature stories on contested races in the Nov. 8 general election. Stories will appear most days through Nov. 6. A complete look at all Maui County Council and state House contests was published as a special section in the Oct. 23 edition of The Maui News.

Voters can either stick with Couch, who’s running on his

record of three two-year terms as a council member, or pick King, vice president of Pacific Biodiesel and an elected Board of Education member from 1994 to 1998. 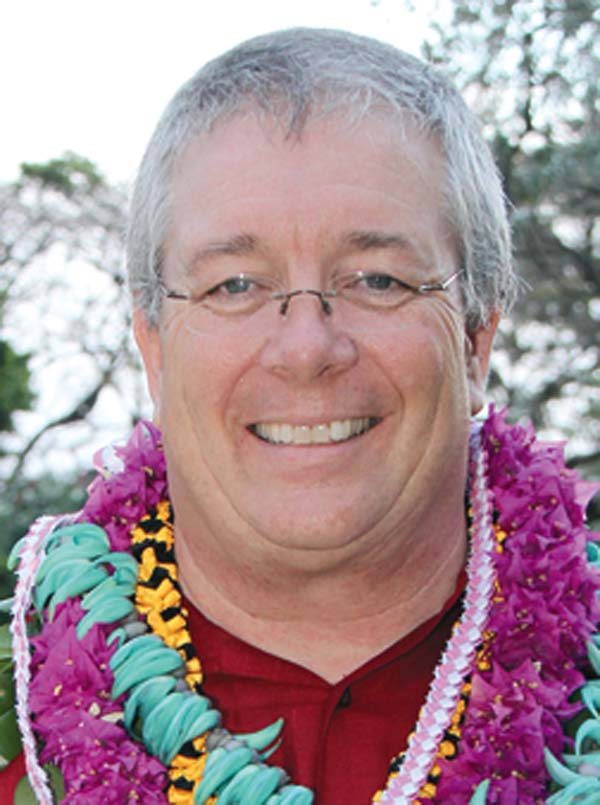 “I believe my background is broader than my opponent’s,” she said. “I have a more unbiased understanding of the issues, and my focus is on community service, not a political career.”

Couch said that he is “an experienced community leader who has been in the thick of the most important issues to face our county in the last decade.”

He said his “strong track record” includes being the council’s Planning Committee chairman for the last six years.

“It can be contentious at times,” Couch said. “However, I believe I have the temperament and the experience to bring parties together to provide a legislative solution to issues that face our government. My experience as the county’s deputy planning director has helped to provide me the clarity and knowledge of the process to be an effective leader on the council’s Planning Committee.” 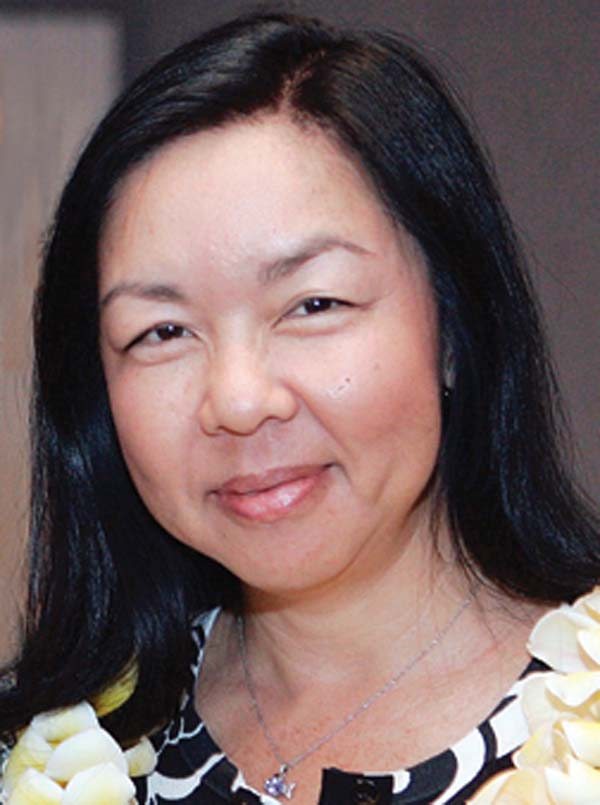 A member of the “Maui Ohana” slate of reform-minded candidates, King contends that by being friendly with the administration of Mayor Alan Arakawa, Couch is an example of cronyism.

Couch had no professional planning experience and wasn’t qualified to serve as deputy planning director, she said.

“He’s an IT guy, not a planning guy,” she said, referring to Couch’s background in information technology. “You can’t engage in cronyism and claim to want to get rid of cronyism.”

King contends that Couch’s campaign spending records show “a disproportionate percentage of developers, Realtors, large corporate donors and lobbyists.” She said she’s supported by a “broad base of individuals.”

Couch said that his donor base is “a fair representation of the diverse community we live in — groups that support our economy both directly and indirectly.

“To lump the donors that were listed under four arbitrary categories is inaccurate and in some cases incorrect,” he said. “Although I appreciate donations, I don’t ‘check the donor list’ when making my decisions. I make decisions based on the merits of the issue — always have and always will.”

Couch notes disputes between the county’s Department of Environmental Management and Pacific Biodiesel and questions whether King could be unbiased toward the Arakawa administration.

“My opponent’s husband created a new method for producing diesel, which they turned into a successful company,” he said. “However, that company has had some very visible disputes with the county administration over its use of county property and was ultimately forced to relocate out of the county Central (Maui) Landfill because of violations of the fire code. That is a matter of record.

“The question is: If elected, will my opponent be able to control her well-documented anger at the county administration over its decision? Or will this dispute over a private business matter now color her ability to function as an elected official?” he asked.

King disputed the “matter of record” comment but admitted she’s not a fan of the Arakawa administration. As such, she added that she “probably represents two-thirds of the island in how disappointed I’ve been with the mayor and his administration.”

She said that Couch’s statements were wrong about the landfill situation.

Pacific Biodiesel received an out-of-compliance notice from the county Department of Environmental Management three days after King publicly questioned the selection of Anaergia Service of Carlsbad, Calif., to build a $100 million waste conversion facility at the landfill, she said.

The business was told it needed to leave the landfill, King said. Pacific Biodiesel had been a partner and subcontractor of Maui EKO Compost, diverting fats, oils and grease to make biodiesel for more than 15 years.

King said that the dispute with the county involved a permit for a cement slab that took more than two years to review.

There were “no violations as far as being in the landfill,” she said.

The county kept giving extensions to allow Pacific Biodiesel to remain at the landfill, and company officials thought the county wanted to keep the matter “quiet.”

Finally, the company pulled out of the landfill because “we were tired of being harassed by the county,” King said. Now, the company’s refinery is at Keaau on the Big Island.

“Don is trying to create something out of nothing,” King said. “We were never issued a notice of violation.”

She said that the company asked the department for a written notice of violation but never received one.

As far as her “well-documented anger,” King said the same could be said of council Chairman Mike White and council Budget and Finance Committee Chairman Riki Hokama, both of whom have had public disputes with the Arakawa administration.

“If Don Couch were not in the mayor’s pocket, he’d be angry as well,” she said.

When asked about King’s comments, Couch said he can be independent of the mayor’s administration.

When asked about King’s claim that Couch has said he’d have a job in the Mayor’s Office if he were to lose the election, he denied it, saying, “Not that I know of.”

Here’s how the candidates stand on the issues:

King said there’s a “substantial homeless problem in Kihei, as there seems to be in various areas around beaches and parks throughout Maui.”

She said she’s aware of at least two citizens’ efforts to create solutions with a growing understanding of the reasons for homelessness.

“One such idea being promoted is a complex of units (whether tiny homes, container homes or other similar solution depending on funding) which could be on state or county land,” she said. “Another possibility is for the county to lease and convert the 30 percent-plus vacant commercial/office space in Kihei to affordable rentals.”

Couch said that the answer is “housing first, then provide services.”

“A major first step is to build shelter for these families, especially for those families with young children,” he said.

Meanwhile, the Maui County Council should review and approve the mayor’s plan to address homelessness, which was presented to the council in January, Couch said.

“South Maui infrastructure is a work in progress because it is still very much a growing community,” Couch said.

Compared with road conditions 20 years ago in South Maui, there’s improvement, he said, and “our road system now has enough capacity to run smoothly most of the time.”

The council member said that he’s been focused on a more “smart-growth” community, friendly to pedestrians and bicyclists, as a way to get people out of their cars. Couch said he was successful in getting funding to extend the Kihei greenway and to add sidewalks throughout the community.

“The north-south collector road, which will be an important element in mitigating Kihei’s traffic issues, continues to expand,” he said, and the roundabout at the intersection of Piikea Avenue and Liloa Drive “has proven its worth by improving traffic flow and increased safety.”

King said that Kihei’s infrastructure is “sorely lacking, largely because our county administration, Planning Department and council have let developers off the hook and have not held them responsible for the deferred agreements that are supposed to pay back the county for installing curbs and gutters, electricity and other infrastructure after a subdivided lot gets sold and developed.”

Couch said that affordable housing is the biggest issue facing the community.

“Economists tell us we should be building 1,400 dwelling units a year,” he said. “We have actually been building closer to 200 to 300. That means our housing deficit is growing every year.”

Couch said that his Planning Committee appointed a Temporary Investigative Group to study a Planning Department proposal to increase affordable housing. The result was a 14-point list of proposed actions for the council to consider, he said.

King said community planning is “a key foundation for development, just as roads, water, parks and other important services that make our neighborhoods livable. The last thing we should do is stop our planning process. When you’re trying to fix something that’s going too slow, you don’t bring it to a grinding stop!”

Couch has said his committee has been reviewing ways to improve the process of approving community plans, but without necessarily stopping the process of working on them.

Political experience: Elected to the state Board of Education, 1994-98

Education: Attended a community college in Santa Barbara, Calif., and the University of Hawaii Maui College