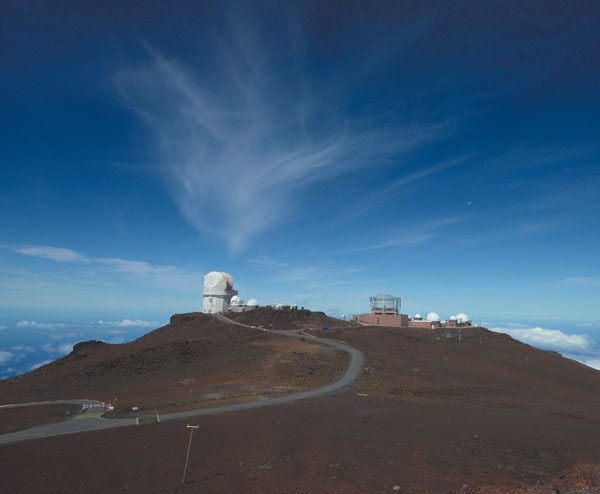 The Hawaii Supreme Court upheld a state permit for the construction of the Daniel K. Inouye Solar Telescope atop Haleakala. This photo was taken of the $340-million telescope was taken in June. The Maui News / MATTHEW THAYER photo

A majority on the state Supreme Court sided with developers of the Daniel K. Inouye Solar Telescope and concluded that the state Board of Land and Natural Resources properly granted permits for the telescope atop Haleakala.

The opinion Thursday was a blow to Native Hawaiian group Kilakila ‘O Haleakala, which has been battling the construction of the telescope in the courts since 2009, according to its attorneys, the Native Hawaiian Legal Corp.

“We are disappointed with the court’s decision,” said a statement from the Native Hawaiian Legal Corp. “This decision impacts all who are concerned about the protection of Hawaii’s natural and cultural resources.

“This case has been in the courts since 2009 and is a testament to the diligence and steadfastness of our client, Kilakila ‘O Haleakala, a group of cultural practitioners who will continue to protect the sacredness of this mauna.”

The solar telescope, which will be the only one of its kind in the world when completed possibly in the next three years, was the subject of protests and arrests by opponents in the summer of 2015 when developers twice trucked large pieces of the telescope from its Puunene baseyard to the summit of the 10,000-foot mountain. Protesters joined arms through PVC pipes and laid in front of the wide loads at the baseyard and threw rocks, trees and glass on Crater Road in attempt to halt the convoys.

More than 25 protesters were arrested in the two demonstrations.

Native Hawaiians consider the mountain sacred, and the crater is known as the place “where the gods live,” wrote Chief Justice Mark Recktenwald in one of two opinions on the telescope issued Thursday. He said that the summit has traditionally been used for religious ceremonies, for prayer to the gods, to connect to ancestors and to bury the dead.

The Advanced Technology Solar Telescope, which was later renamed after the late Hawaii senator, will be able to take high-resolution images of the sun to study solar magnetic fields and their relation to solar energy, sunspots and flares, Recktenwald said.

“Haleakala is a site of great cultural and spiritual importance to the Native Hawaiian community,” he wrote. “It also bears the scientific significance for astronomical studies and is a popular visitor destination.”

A divided court, 3-2, affirmed the state land board’s decision in 2012 to grant a permit for the telescope.

For the past two decades, the Association of Universities for Research in Astronomy, the National Solar Observatory and the National Science Foundation have been developing the telescope. Haleakala was chosen from 72 sites worldwide in 2004.

Although the high court sided with the telescope developers Thursday, it did not in December 2013. The court found that the land board unlawfully approved a conservation district use permit in 2010 without holding a contested case proceeding requested by Kilakila.

While on appeal, the land board initiated a contested case process, and the hearings officer issued his recommendations in March 2012, which called for approving the permit for the telescope. Later in the month, the hearings officer said he received pressure from officials with Inouye’s and then-Gov. Neil Abercrombie’s offices.

A new hearings officer was appointed, who in July 2012 recommended approval of the permit. On Nov. 9, 2012, the board approved the permit again.

Kilakila appealed the land board’s decision to the 1st Circuit in Honolulu, which ruled against the group. An appeal to the Intermediate Court of Appeals also was unsuccessful.

“We have concerns about BLNR’s handling of Kilakila’s requests,” wrote Recktenwald. “In future contested case hearings, BLNR could certainly do more to remove doubts of impropriety and build confidence in its permit approval process.

“Despite these concerns, we cannot say the BLNR abused its discretion when it denied Kilakila’s requests.”

He wrote that the government officials should be ordered to produce communications Kilakila has requested, which were denied by the land board. These communications “undermined the integrity of the contested case hearing and also contributed to the appearance of impropriety,” Wilson wrote.

UH President David Lassner, who was a defendant in the case, said Thursday that the university “is pleased with the state Supreme Court’s actions.”

“We are still reviewing the full decisions, but we look forward to ‘first light’ when the Daniel K. Inouye Solar Telescope will open a new era of discovery in Hawaii, about the sun and its daily impacts on all life on Earth.”

It was the university that sought the permit for the construction of the telescope.

“Scientists will be able to see more clearly into the heart of sunspots, flares and other solar activity,” he said Thursday. “New understandings of how the sun works, such as learning to predict solar storms, is vital to protect vital space-based assets, such as communication and weather satellites and Earth-based assets, such as our power grids.”

The vertical and external construction of the $340-million telescope is complete, said UH spokesman Dan Meisenzahl. The remaining work is internal, and the project is on budget and on track to be operational in 2019.

Attorney General Doug Chin raised the specter of the rulings having an impact on the Thirty Meter Telescope effort atop Mauna Kea, which has faced fierce opposition from Native Hawaiians.

“We respect the court’s decisions and will consider them carefully to determine what impact, if any, they have on future matters before the state land board, including the Thirty Meter Telescope.”

Recktenwald did make clear in his opinion that the Thirty Meter Telescope process differs from the Inouye telescope’s because Kilakila and the land board and UH entered into a stipulation to “void the first permit.” This differs from the high court’s decision in the Big Isle telescope case, in which it voided the permits because of the land board’s decision to approve permits prior to a contested case hearing.

In the Haleakala case, the voiding of the permit “adequately protected” the due process rights of opponents of the telescope in the contested case hearing and in the subsequent vote by the BLNR, the chief justice wrote.