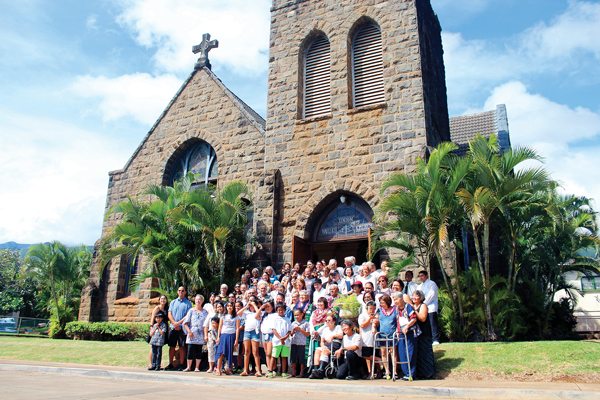 After a special service Sunday celebrating the 150th anniversary of the founding of Wailuku Union Church, members pose outside the iconic stone sanctuary that became the church’s new location in 1912. The Maui News / COLLEEN UECHI photo

WAILUKU – At the turn of the 20th century, the Wailuku Union Church was struggling. It was down to one member — Edward H. Bailey — and the church was forced to shut down for 10 years. But then the Rev. Rowland Dodge stepped in, oversaw construction of a new stone church building and grew the congregation back to 100 members.

Today, Wailuku Union Church is alive and well and, on Sunday, members celebrated the 150th anniversary of the founding of the church.

As morning sunlight filtered through the sanctuary, members sang hymns, dedicated a newly purchased organ and took part in communion during a special anniversary service. Mayor Alan Arakawa was on hand to congratulate the congregation on its milestone.

“The longevity means we must be doing something right,” the Rev. Robb Kojima said with a twinkle in his eye.

Wailuku Union Church, as one member pointed out, has been around since people were traveling by horse and buggy. Members have been serving soda since the very first Maui County Fair 94 years ago. And, in addition to several notable missionary families, the church has counted actor Richard Denning among its members. Denning played the fictitious Gov. Paul Jameson on the original “Hawaii Five-O” TV series. 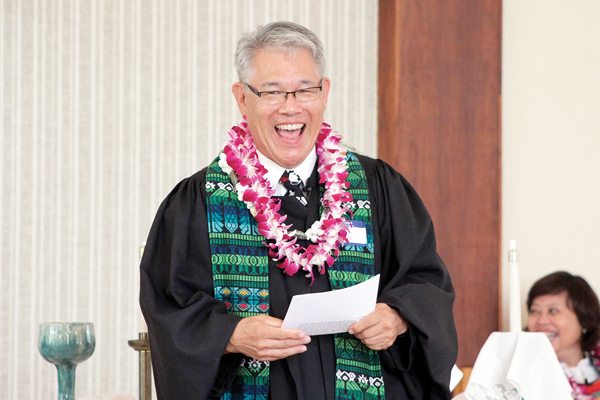 The Rev. Robb Kojima, senior minister at Wailuku Union Church, jokes with members of the congregation before the beginning of his sermon Sunday. The Maui News / COLLEEN UECHI photo

Wailuku Union Church is a congregation of the United Church of Christ. The church’s roots go back to the mid-1800s, when missionaries coming to Maui from the Mainland wanted to set up an English-speaking congregation, Kojima explained. On Oct. 10, 1866, the Wailuku Union Church was officially founded and, in early 1867, a small-frame building was constructed to house the congregation on the corner of Kaohu and South High streets. Services were held on the top floor and Sunday school classes were taught below.

The Rev. Thomas Thurston served as the first pastor of the church, followed by the Rev. William Patterson Alexander.

After Alexander retired in 1882, the church went through half a dozen ministers over the next 20 years and struggled financially, as many residents began moving to Makawao, Kojima said. Dodge arrived at the church in 1905. Along with rebuilding the congregation, he immediately faced another challenge when the county condemned the church property in 1910 and appropriated the land for government use.

The church didn’t have to move far — no more than a few hundred feet down the street. Using stones gathered from Iao Valley and nearby sugar-cane fields, builders erected the now-iconic, Gothic-style sanctuary. Upon its completion in 1912, the church cost $27,000. The interior was lined with ohia flooring, oak pews, stained-glass windows and a seven-rank pipe organ that was a gift from Henry Perrine Baldwin.

“Some people say the stained glass is as beautiful as any church in Europe,” said Vera McCabe-Silva, who first came to the church 42 years ago. 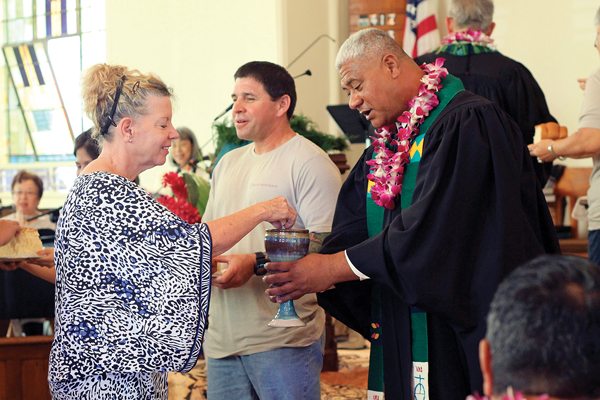 Some members’ roots go as far back as the church itself. Lifelong member Zelie Harders said that five generations of her family have been a part of the church. Harders’ ancestors came from Boston in the 1840s and were among those interested in setting up an English-speaking church. She said that her family contributed $25 to the first building, a lot of money at the time.

The church has a special significance for Harders — it’s where she married her high school sweetheart, Ted Harders, in 1956, and where all three of their children were baptized.

“It’s hard to explain what draws you to it,” Ted Harders said. “It’s the way you conduct your life, the way you treat other people.”

Having watched the church grow and change for 60 years, Harders said that he thinks it’s “become more open and more sympathetic” to marginalized groups such as the homeless.

Nell Markt started coming to Wailuku Union Church 43 years ago. Her family had only one car and the church was close, so she walked there on Sundays. She stayed because she liked the minister and the church family. As leaders and members have changed, Markt said one thing has remained the same.

“It’s still (focused on) Jesus,” said Markt, who continues to attend services at Wailuku Union Church even though she lives in Haiku now. “When the doctrine is sound, it doesn’t matter who’s in charge.”

Over the years, the congregation size has fluctuated. In the 1940s, for example, due to a merger with the Wailuku Chinese Church and an influx of service members during World War II, attendance at Wailuku Union Church swelled to 250. In 1955, the church added two Sunday school buildings, a result of the post-war baby boom that many other churches on Maui were also experiencing, Kojima said.

Today the church has about 125 members, though 50 typically fill the pews on Sundays, Kojima said. But while the church may be small, it has big plans for the future.

The church is considering the development of a “mission grounds” in a 2-acre lot between Hale Ho’ike’ike, formerly the Bailey House Museum, and Ka’ahumanu Church that would include 20 housing units and a community center for differently abled adults. The church is also discussing moving its preschool and doubling its capacity to 60, including children with physical and mental challenges. All plans are in the conceptual stage.

Often, people of different abilities are moved to the outskirts of the community, Kojima said. Creating a place for them to live that’s close to medical services, county buildings, bus routes and potential job and volunteering opportunities would improve their quality of life, he explained.

“It’s very easy for churches to think inwardly,” Kojima said. “But we have really turned in to looking at how we can participate in what God is doing in the community.”

After a special service Sunday celebrating the 150th anniversary of the founding of Wailuku Union Church, members pose outside the iconic stone sanctuary that became the church’s new location in 1912. The Maui News / COLLEEN UECHI photo

The Rev. Robb Kojima, senior minister at Wailuku Union Church, jokes with members of the congregation before the beginning of his sermon Sunday. The Maui News / COLLEEN UECHI photo