The Sugar Cane Train becomes The Holiday Express for the season 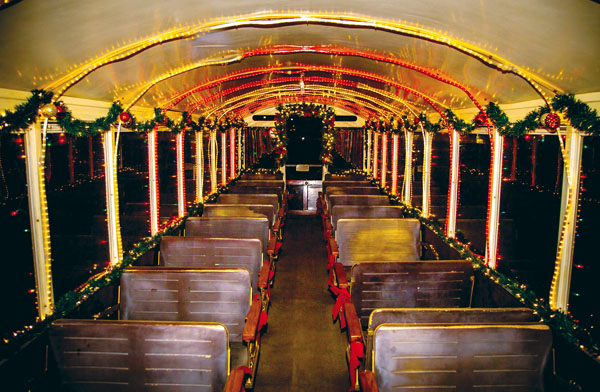 Tickets are $30 per person (children under age 2 may ride for free in the lap of an adult) on the Holiday Express train that will run Fridays through Sundays through Dec. 25. Maui Forever photo

The Sugar Cane Train is coming back to Lahaina town this holiday season for the first time in two years starting Friday, a co-owner of the train said Wednesday.

Dubbed “The Holiday Express,” the train,  adorned with Christmas lights and decorations, will run Fridays through Sundays until Dec. 25 from Puukolii Station heading south to Kaanapali station. Two rides are available each night — at 6:30 and 8, with each lasting about 45 minutes. Check-in is 30 minutes before the ride.

Tickets are $30 per person, though children under age of 2 may ride free in the lap of an adult. Passage may be booked  online at www.sugarcanetrain.com or by calling 667-6851.

“There’s not really any Christmas light experience in Lahaina, so we made a go of it,” co-owner and Lahaina businessman Todd Domeck said Wednesday.

Tickets are already sold out for the early train ride on Friday and Saturday, with later rides quickly filling up. Each 4-mile ride has about 100 seats. 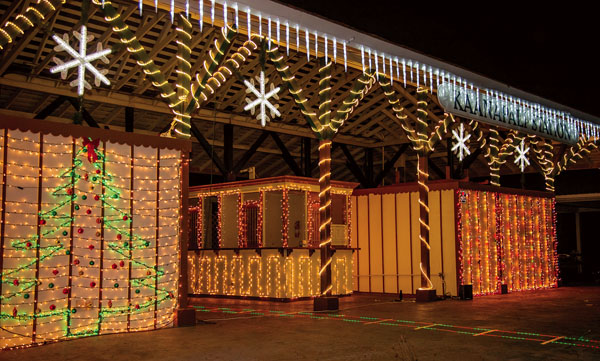 The Kaanapali Station is adorned with Christmas lights in preparation for the Holiday Express train that will run Fridays through Sundays through Dec. 25. Maui Forever photo

“We’ve been thrilled with the amount of sales and community support we’ve gotten,” Assistant Manager Katie Morgenstern said. “We did very minimal advertising, so it’s all been word of mouth, but it spread really quickly. We were surprised with how quickly it sold out. We’re very excited.”

Milk and fresh baked cookies will be served to all passengers, and there will be a visit from Santa Claus at the Kaanapali Station. Santa will sing and talk to guests throughout the three-car train as well as handing out a toy to each child.

Workers painted the roof, stained the wood and polished the seats of the cars and the engine, Morgenstern said. The train will be pulled by a diesel engine, but workers were assembling the iconic steam locomotive “Anaka.” It was placed in storage, and the railroad hopes to have it running before Christmas.

“We only decided to do the holiday train about a month ago, so we’ve been working around the clock since then,” she said. “Pretty much every inch of the train is covered in lights at this point.”

The train has conducted a couple of private runs for the owners’ family and friends since the closure, but is unable to traverse the entire 6-mile track between the Lahaina and Puukolii stations. The holiday ride will not travel on the trestle bridge and will run in reverse on its return to Puukolii Station. 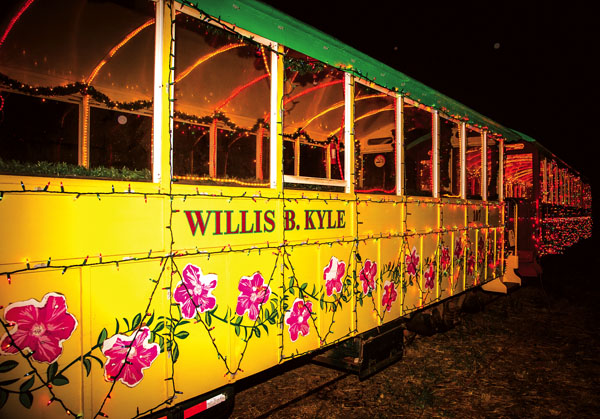 Rides are available each night at 6:30 and 8, each lasting about 45 minutes, heading south from Puukolii Station. Check-in is 30 minutes before the ride. Maui Forever photo

Some timbers in the trestle, which was built in 1958, are rotting and need to be repaired, Domeck added.

About 4,000 individual ties, or pieces of wood that the rail sits on, need to be replaced, Domeck said. He said the tracks have degraded due to age and the weight of construction vehicles passing over them. The worst sections are in the Lahaina Civic Center area.

“We had a structural inspector come out for three days, and he has a list of a bunch of members that need to be replaced,” he said.

The nearly 50-year-old attraction has been closed since its final public run on Aug. 1, 2014. Former owners Robert and Kim Butler of Nebraska closed it due to mounting operational losses. Workers said the business, managed by Lahaina Kaanapali & Pacific Railroad, had been losing money for two years prior due to the economic downturn and a string of derailments.

A.W. “Mac” McKelvey founded the train in 1969 and since then, the railroad has handled about 15 million passengers. In its heyday in the 1990s, the train brought its owners $10 million to $12 million per year in revenue and attracted 4,000 passengers per day.

By the time it closed, it carried fewer than 4,000 passengers a month.

Domeck, owner of Maui Pineapple Tour in Haliimaile and zip line companies in Oahu, Florida and Texas, bought the train with Napili businessman Craig Hill in October 2014. Hill owns Maui Concierge Services and started and sold the company that is now Expedia.

The owners had originally hoped to permanently reopen the train in six months but are now eyeing sometime next year, Domeck said. He said acquiring the land and rights-of-way have been held up, but he is working with landowners.

“Quite frankly, the land is worth more to develop than to put a railroad on it,” he said. “There’s no threats to the railroad, but we’re working hard on trying to make sure the railroad continues.”

Their investment plan calls for spending about $6 million on rebuilding the railroad, fixing the trains and adding restaurants, retail and other activities at each of the three stations, Domeck said. He said their main restaurant would be at the Lahaina Station, with the Kaanapali Station continuing to host luau and weddings and the Puukolii Station featuring an ice cream parlor, coffee shop and family fun center area.

“It’s one of those things we both want to pass on to our kids,” he said. “There’s not many places like this in the world.”

The improvements would produce 60 jobs and ease traffic from Kaanapali and Lahaina, Domeck said. He said residents could leave their cars in the parking lot and use the train to get to work. The Puukolii Station has about 60 stalls and the Lahaina Station has about 50.

For the Holiday Express, Domeck had originally sought to partner with “The Polar Express” brand but were “just a little late” in making the decision. He said the Polar Express brand has about 50 railroads and rakes in about $55 million a year during Christmastime.

“It costs us $7,000 to $10,000 a month to hold on to the train, so it’s been a lot of money just to sit here,” he said. “We’re not sure we’re going to break even with the holiday rides, but it’s really about keeping the train relevant and letting people know that we still love it and intend to keep it.”

Domeck said former workers have returned to work the holiday rides, bringing their expertise to the railroad. He said he was surprised and grateful that they returned.

“I’m always blown away by how much people love this train,” he said.