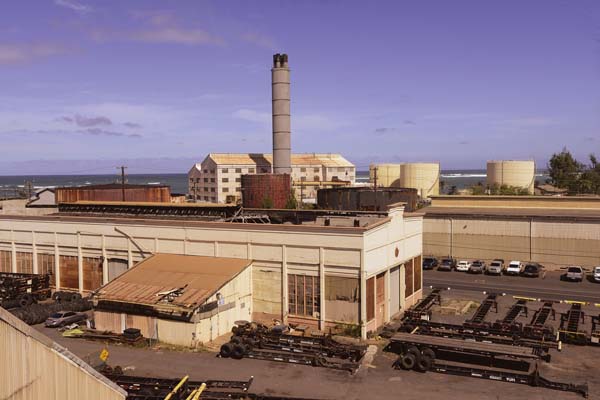 Maui Electric Co.’s Kahului Power Plant was recently reactivated due to increased power demands and the loss of power from Hawaiian Commercial & Sugar Co. in early January. HC&S, which will be shutting down next month, provided MECO with 1,265.5 megawatt-hours of power in the July-to-September quarter. This photo was taken Nov. 18 from sugar storage operations at Kahului Harbor. The Maui News / MATTHEW THAYER photo

Hawaiian Commercial & Sugar Co. provided 1,265.5 megawatt hours of power to Maui Electric Co. in the third quarter, the second-to-last quarter that the sugar company will be providing electricity to Maui residents.

The sugar industry, which will be disappearing from Maui and the state next month, actually brought electricity to the island: Claus Spreckels demonstrated the first electric lights at Spreckelsville Mill in 1881 — 40 years before the birth of MECO, according to the utility. HC&S, the last plantation in Hawaii, which will be ending production in December, installed the state’s first oil-fired plant to power the Puunene Mill in 1907.

MECO’s report to the state Public Utilities Commission on Nov. 21 said that the utility paid $241,717 for the power generated by the Puunene Mill from bagasse, coal and oil for the July-to-September period. All of the power was “regular” or scheduled power; the latest power purchase agreement calls for HC&S to provide 4 megawatts of scheduled power to MECO from March to May and October to December and up to 16 MW of immediate emergency power.

The agreement also allowed the plantation to offer additional energy to MECO if it’s available and if the utility requests it.

The current agreement, which took effect in October 2015, ends Jan. 6. It scaled back HC&S power deliveries to MECO significantly from as much as 12 MW of power year-round.

To make up for the lost power, MECO is seeking approval from the PUC to temporarily install three used diesel power generators near Maui Lani for times of peak power use. The units can generate 4.95 MW of power for the utility’s reserve-capacity use, MECO said.

The utility also announced last month that it had reactivated two generators at its 68-year-old Kahului Power Plant after deactivating them in February 2014. The decision to run the units continuously, instead of only in emergency, as-needed situations, was tied to growing demand for power and to the HC&S closure, the utility said.

In early January, HC&S’ parent company, Alexander & Baldwin, announced the closure of Hawaii’s last sugar plantation at the end of this year. Layoffs have been coming in waves, but the closure will result in lost jobs for more than 600 workers.