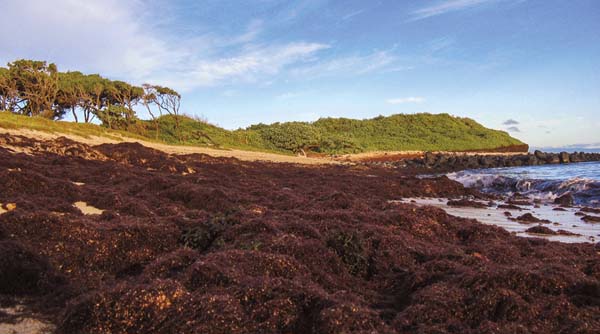 Remnants of invasive algae bloom cover a beach and rocks at Kuau Bay in 2013. University of Hawaii at Manoa photo

“I have never seen a paper or sound results as high as what we found in Kuau Bay in terms of nitrate levels,” said Daniel Amato, lead author and recent graduate of UH College of Natural Sciences. “It’s approaching enforceable contaminant (Environmental Protection Agency) levels.”

The study also is the first to show the extent of the impact of wastewater injection wells at Kahului Wastewater Reclamation Facility — the island’s highest-volume sewage treatment plant. Along with high nutrient levels in marine surface waters, scientists found shallow areas almost entirely dominated by a “thick fleshy mat of colonial zoanthids” in Kahului Bay, the study said.

The density found in the bay is a phenomenon not reported anywhere else in the state. 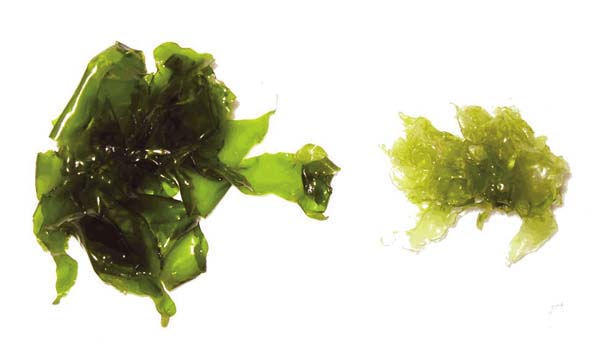 “I’ve never seen them dominate an ecosystem like that,” Amato said.

The findings build on previous research and recent court rulings that show treated wastewater is illegally discharged to the ocean from injection wells at the Lahaina Wastewater Reclamation Facility via submarine groundwater discharge to Kahekili Beach Park in West Maui, Amato said.

Maui County has appealed the landmark decision to the 9th Circuit Court of Appeals, which officials believe will have implications for states and counties across the nation. County officials said the ruling means injection wells are subject to the Clean Water Act, even though they are operating in compliance with permits issued under the Safe Drinking Water Act.

The EPA has issued a brief to the appeals court in support of the rulings, stating that all four injection wells at the Lahaina facility are “illegal” and in violation of the Clean Water Act. A UH dye study released in the summer of 2013 was key in showing effluent flowing from at least two injection wells into the ocean.

“What’s happened in Lahaina is not an isolated occurrence,” Amato said, referencing ongoing studies that have found similar results from injection wells on Oahu. “What happened at Lahaina is not going to solve the larger problem, which is injection wells are adding a lot of wastewater to our reefs. I was tracking nitrogen, but there’s also a slew of” industrial chemicals and other contaminants that have been largely unstudied.

Published in PLOS ONE, a peer-reviewed open-access scientific journal through the Public Library of Science, UH researchers documented land-based pollutants such as fertilizers and chemicals in wastewater from 2012 to 2014, a news release said. The pollutants infiltrate into the groundwater and eventually exit into nearshore ecosystems — seeping into the coastal zone beneath the ocean’s surface.

Scientists used a combination of field experiments and chemical analysis of water and algae to measure coastal groundwater quality and ocean water quality. By comparing the nitrogen isotope signature of algae tissues and potential pollution, the research group traced nutrients in the algae back to their land-based sources.

Smith, who is a professor in the botany department, specializes in invasive algae physiology and acted as Amato’s primary academic adviser, he said. The team used her lab to measure the levels of nitrogen at Maui’s bays through seaweed.

Researchers starved the seaweed to bring nitrogen levels down before placing it in the bays. Within days, they soaked up nutrients and transformed.

“They’re essentially sponges for whatever nutrients are in the water,” Amato said. “We leave them out for a few days and bring them back in and test the tissues and are able to trace the level of nitrogen in the algal tissues back to the potential sources identified on land.”

Injection wells have long been criticized for releasing nitrogen and other contaminants into ocean waters leading to algal blooms and unhealthy reefs. Amato said many facilities were designed and built in the 1970s when the Clean Water Act was still new, and people “didn’t have a huge understanding of what is OK or not in terms of nutrient loading to coastal ecosystems.”

A companion study led by UH scientist James Bishop found that water collected from beach sands, which represents coastal groundwater, next to the Kahului wastewater facility contained up to 75 percent treated wastewater.

Amato said the method of disposal is still flawed and that warm freshwater from the wells does not mix or dilute well with cold, potentially salty ocean water underground. He said the injected water, thus, tends to rise and form a layer on the surface where people swim and play.

The team also measured the level of radon gas in the water compared with coastal groundwater to calculate what is flowing into the ocean. Reefs adjacent to large areas of sugar cane agriculture were the most impacted of all the sites in the study.

High levels of nutrients were reflected in the tissues of common macroalgae and measures of reef community structure, according to the study. A few species of macroalgae dominated intertidal and subtidal surfaces at Kuau and Maalaea bays, whereas areas that had lower nutrient levels experienced greater diversity and corals were generally present (indicating a healthier, potentially more robust ecosystem).

Over the past 12 years or so, Maalaea has seen a “drastic decrease” in coral and increase in algae, Amato said. While condominiums in the area have injection wells, they are likely a minor source compared to fertilizer from sugar cane fields, he said.

With the impending closure of Hawaiian Commercial & Sugar Co. and end of sugar cane production, scientists are interested in what will happen to adjacent reefs. Amato hopes to monitor waters off Kuau and Paia, where much of the sugar cane exists, for years to come and is seeking funding for the work.

The ultimate future of Maui’s reefs, however, will be in the hands of coastal managers and lawmakers who will influence the future of land-use policy in Hawaii.

“How long will it take for the aquifer to clean itself out and what’s going to be the impact of the new development?” Amato asked. “The worst case scenario is decades, the best case is years.

“It could be very positive if we choose to use the land in a responsible manner and avoid pesticides and herbicides, but I guess time will tell.”