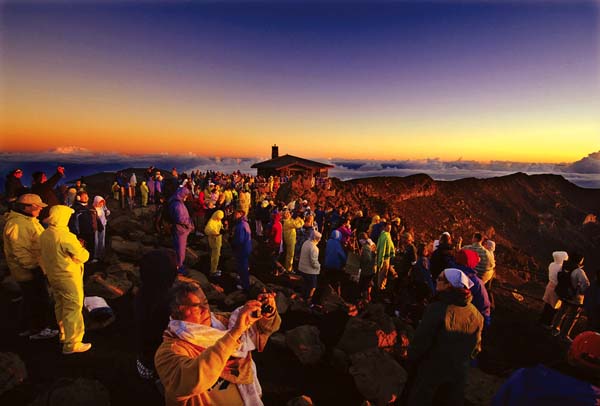 With sunrise crowds growing beyond the capacity of parking lots at Haleakala National Park, a reservation system is set to begin in February as a pilot program. Cost will be $1.50 and can be booked up to 60 days in advance. The Maui News / MATTHEW THAYER photo

Sunrise at Haleakala National Park, one of the biggest visitor draws on Maui, will require paid reservations starting in February, as part of efforts to cut down on early-morning crowds that regularly exceed 1,000, park officials announced Monday.

The reservation system is a pilot program that will go live on Thursday at recreation.gov. The one-day sunrise reservation costs $1.50 and can be booked up to 60 days before the visit.

“Overcrowding is causing major visitor and employee safety concerns,” Polly Angelakis, the park’s chief of interpretation and education, said Monday. “We just don’t have the space to accommodate all the cars.”

The new system will not affect cultural practitioners or commercial tours, which “follow completely different policies,” Angelakis said. All sunrise viewings before Feb. 1, 2017, will be open on the usual first-come, first-served basis.

Haleakala National Park, which is open 24 hours a day, seven days a week, often sees more than 300 cars per sunrise. The actual number of people can surpass 1,000. When the 150 spaces in the four summit lots fill up, people tend to park on the road shoulders, putting endangered natural and cultural resources at risk, Angelakis said. Visitors moving off the trail and climbing cliff sides in the dark have also caused accidents at the summit.

The new system will require private cars to make a reservation online; bookings cannot be made at the entrance station. All residents and visitors, including those with annual park passes, will have to pay the $1.50 reservation fee. The entrance fee is separate and cannot be paid online because the recreation.gov website is not equipped for that, Angelakis said.

Reservation holders will need to present a receipt and a photo ID at the entrance booth. Anyone entering the summit district from 3 a.m. to 7 a.m. will need a sunrise reservation, even if they are just coming to hike. Reservations cannot be booked on the day of the sunrise, and park visitors without one will have to wait until 7 a.m. to enter the park.

Tickets are nonrefundable and nontransferable.

Angelakis said the new system will help people who drive to Haleakala from distant parts of the island, only to have to wait outside the park because the lots are full.

“It’s not a positive experience for someone who drives three hours in the middle of the night and can’t get into the park and view the sunrise,” she said.

Matt Wordeman, president of the Friends of Haleakala National Park, said that the nonprofit is “not generally in favor of limited access to the park.” However, if it will help protect visitors and resources, he supported it as a temporary fix.

“I think requiring a reservation until a longer-range or more permanent solution to the problem is provided is a good solution,” Wordeman said. “I think it will definitely benefit the park  . . . but to say it benefits visitors is difficult because there will be some people that won’t be able to see the sunrise because of this.”

Wordeman said one long-term answer could be providing another form of transportation, such as a park shuttle from Upcountry to the summit. Another solution could be encouraging people to visit for the sunset instead of sunrise, he said.

Roni Gonsalves, Maui station manager for Polynesian Adventure Tours, fully supported the reservation system. Gonsalves said tour guides go over the park’s rules with its riders, “whereas the rental cars have no clue.” The tour company is limited to two minibuses for each sunrise, a total capacity of 48 seats.

“These rental cars are parking on the lava fields and (people are) walking up to the silversword plants,” Gonsalves said. “We’ve seen them on the rooftops of the visitors center. It’s very abusive. I’m all for the regulation of the entry.”

Changes are in store for commercial businesses as well. In 2018, the park will cut the number of permitted road-based vehicle tour companies from around 20 to just four.

Earlier this year, park staff gathered public input on sunrise visitor management, and the reservation system “was deemed the best short-term option,” according to a park press release. Angelakis said the fees will help pay for the use of recreation.gov and will not generate additional revenue for the park.

“We envision this system being in place for two years, while we go through the planning and approval process for a long-term solution,” Angelakis said.

Long-term planning for the park’s sunrise management will begin in 2017. The plan is expected to be finalized in 2019.

For more information on the new system, visit nps.gov/hale/planyourvisit/index.htm.

Police are seeking the public’s help in identifying two people who illegally entered a vehicle that was parked in the parking lot of Home Maid Baker on Lower Main Street on Nov. 15. They arrived at the parking lot in this black Ford Ranger extended cab pickup, which was parked next to the burglarized vehicle.

With sunrise crowds growing beyond the capacity of parking lots at Haleakala National Park, a reservation system is set to begin in February as a pilot program. Cost will be $1.50 and can be booked up to 60 days in advance. The Maui News / MATTHEW THAYER photo

Maui Electric Co.’s Kahului Power Plant was recently reactivated due to increased power demands and the loss of power from Hawaiian Commercial & Sugar Co. in early January. HC&S, which will be shutting down next month, provided MECO with 1,265.5 megawatt-hours of power in the July-to-September quarter. This photo was taken Nov. 18 from sugar storage operations at Kahului Harbor. The Maui News / MATTHEW THAYER photo