South Maui group has been working with scattered, ‘temporary’ locations since 2001

This is an artist’s rendering of the planned Kihei Charter School facility in the Maui Research & Technology Park. The nonprofit South Maui Learning Ohana will break ground Friday for a new building to house Kihei Charter School, which currently operates in three different locations. The 63,000-square-foot facility will include 30 classrooms, an auditorium, kitchen and commercial space for rent. Photo illustration courtesy of South Maui Learning Ohana

The South Maui Learning Ohana will break ground Friday on a new building and central campus for Kihei Charter School, which has been spread out across three separate locations for more than a decade.

The groundbreaking ceremony will take place at 11 a.m. Friday at the Maui Research & Technology Park at 640 Lipoa Parkway in Kihei.

“They’re all temporary facilities,” Kihei Charter Executive Director John Colson said of the current multi-site campus. “One’s a church, one’s a strip mall and the other’s an industrial park. None are made to be schools. The chance to move from a temporary facility to a facility that is made for a school is going to be night and day.”

The 63,000-square-foot building will include 30 classrooms, an auditorium and kitchen. The public charter school will take up 58,000 square feet — almost double the space that it has now — while the rest will be rented out to businesses.

In July 2001, the nonprofit South Maui Learning Ohana founded Kihei Charter School, which began with 60 students in grades 10 to 12 and shared a space with the Kihei Youth Center, according to its website. During the 2004-05 school year, the school expanded to grades kindergarten to 12. The school’s total enrollment is up to about 550 students, Colson said. 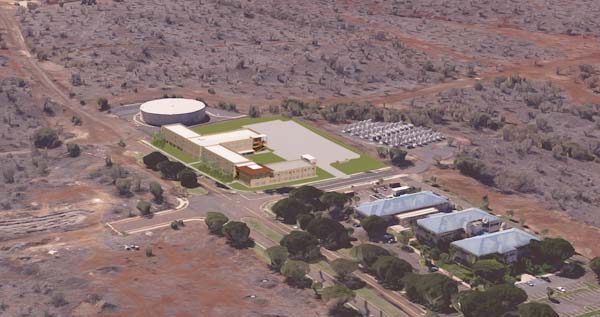 The school will be located on a 2.75-acre plot in the Maui Research & Technology Park in Kihei. Photo illustration courtesy of South Maui Learning Ohana

In its second year, the high school moved to the Kihei Commercial Center, about 3 miles from the other grades. The middle school is located in the Lipoa Center and the elementary school is housed at nearby St. Theresa’s Church.

But around January 2013, the South Maui Learning Ohana was able to purchase a 2.75-acre plot in the Maui Research & Technology Park. Mike Hankal, the owner of the property, sold it to the nonprofit for about $800,000, well below its market value of more than $2 million.

Then in September 2013, the nonprofit secured a $17.7 million loan from the U.S. Department of Agriculture Community Facilities program, which provides funding for “essential community facilities in rural areas,” according to its website. To qualify as a rural area, a community’s population must be less than 20,000.

“Kihei, as of the last census, grew out of the definition of rural,” Zarro said. “But our application was in the hopper so they allowed us to continue. . . . They bent over backwards (for us).”

The South Maui Learning Ohana also raised $1.4 million for the building. Because the public school, as a state agency, cannot own property, the nonprofit entity will own the building and the property and the charter school will pay rent to use it. The terms are still being worked out, Zarro said.

The state pays public charter schools for every student they educate, which is then used to pay for operations and facilities, he said.

The facility will encompass 63,000 square feet, but the school will actually occupy about 58,000 square feet. The rest will be available for some “complementary” businesses, perhaps a doctor’s office or “a 9-to-5 kind of office” to help offset the cost, Zarro said.

The L-shaped building will include one three-story wing and a two-story wing, with a rooftop deck shaded with a canopy of photovoltaic panels from Haleakala Solar. The campus also will include about 110 parking stalls, Zarro said.

The South Maui Learning Ohana currently is renting about 30,000 square feet of space and 18 classrooms for the school. In the new facility, classrooms will be larger. The facility will be able to hold 700 students, and the school expects to hit full capacity when it opens.

Colson said the school may hire as many as 10 to 12 new teachers in the first year.

“We know the demand is there for our program, and opening this building will meet some of that demand,” Zarro said.

The building is slated for completion in May 2018, just in time for school to start in July 2018.

Having one central campus will open the door to many more programs and opportunities, Colson said. Students will be able to do more labs and group activities. The school might look into starting some athletic teams. Younger students will have older kids on campus that they “can look up to,” Colson added.

With the new facility, the elementary program will be able to expand to a full school day. Due to limited space, grades K-5 have to rotate through the available rooms. Grades 4 and 5 get a full day of classes, but kindergarten and 1st grade spend half of the day at school and the other half at home doing virtual classwork.

“A lot of families have been waiting for us to have the full day,” Colson said.

Another thing students and teachers are especially looking forward to is windows in the classroom, Colson added. Set in commercial centers, the middle and high school have few windows to the outside.

“Just having daylight, having windows that open so we can take advantage of a cool day and not run air conditioning,” Colson said. “We’ll do it for one more year, but it’s pretty exciting that we won’t have to do it after that.”

The school is not connected to the proposed South Maui high school.

• Colleen Uechi can be reached at cuechi@mauinews.com.

Michael Lott of Kihei undergoes chemotherapy treatment alongside his children Isabella, 18, and Jake, 16, and registered nurse Sabrina Burnner on Tuesday afternoon inside Maui Memorial Medical Center’s oncology unit. The unit reopened after 16 months of construction earlier this month. “These guys are fantastic. They saved my life once — literally,” Lott said. The Maui News / CHRIS SUGIDONO photo

This is an artist’s rendering of the planned Kihei Charter School facility in the Maui Research & Technology Park. The nonprofit South Maui Learning Ohana will break ground Friday for a new building to house Kihei Charter School, which currently operates in three different locations. The 63,000-square-foot facility will include 30 classrooms, an auditorium, kitchen and commercial space for rent. Photo illustration courtesy of South Maui Learning Ohana

The school will be located on a 2.75-acre plot in the Maui Research & Technology Park in Kihei. Photo illustration courtesy of South Maui Learning Ohana