The last field is harvested, the last of the cane processed and the last ship with sugar in the hold has set sail for California 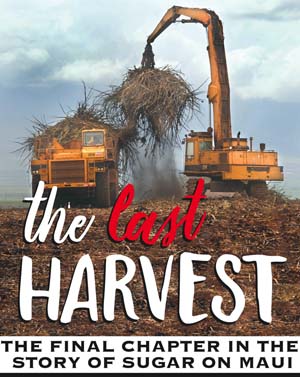 EDITOR’S NOTE: “The Last Harvest” is a series chronicling the various aspects of Hawaiian Commercial & Sugar Co.’s final harvest as it shuts down at the end of the year after a 145-year run. The shutdown of HC&S represents the end of sugar in Hawaii. The installments will run periodically throughout the year.

On Friday, the same day that Puunene Mill smokestacks stopped puffing, the last shipment of Maui-made sugar was carried out of Kahului Harbor. Bound for a refinery in California, the 685-foot-long Moku Pahu held 32,000 tons of sugar and 2,000 tons of molasses.

“I’m going to miss it all the way around, just with the cane fields being green, everything,” stevedore Mark Souki said as he watched the ship cruise out of the harbor. “I hate to see big changes in Hawaii happen. I always worry what the future’s going to be after.”

The departure of “the sugar ship” capped a whirlwind 12 months on Maui. In January, Alexander & Baldwin announced it would shut down Hawaiian Commercial & Sugar Co. after 145 years in business. The closure of the 36,000-acre plantation meant the loss of 650 jobs and the end of an industry that shaped Hawaii for more than a century and a half. 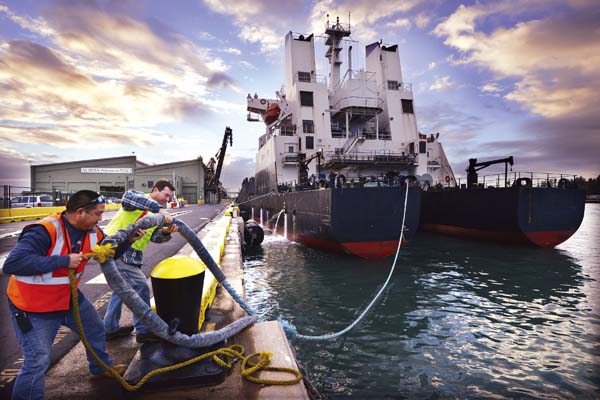 “I’ve been dreading this trip all year,” Moku Pahu Capt. Louis Terramorse said Wednesday. “I’d gotten to the point where I was starting to think I’d finish out my career running sugar on this.”

The 2,500-mile journey is likely to be the last Hawaii-to-California sugar run for the Moku Pahu, a specially designed ship that, like Maui’s sugar plantation, is the last of its kind.

From a distance, the Moku Pahu looks like a regular freighter, equipped with a towering bridge at the stern, three tall cranes and six gigantic cargo holds. 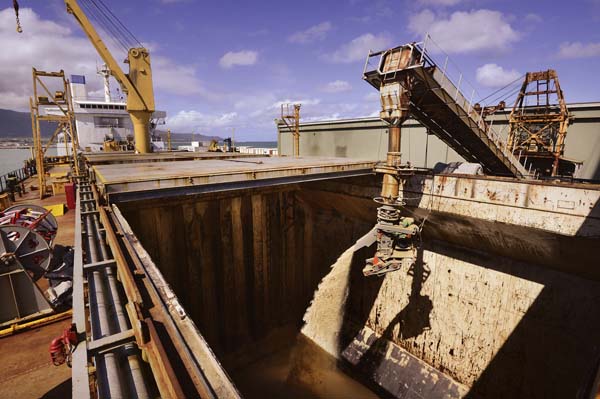 A cascade of unprocessed sugar is delivered to a hold of the Moku Pahu Wednesday afternoon after being transported from the distant sugar house on a series of conveyor belts. The Maui News / MATTHEW THAYER photo

But a closer look reveals that the ship is actually made up of two parts: a barge and a tugboat with catamaran-like hulls. The barge goes between the hulls and slides into a notch that locks it in place.

“We handle just like a ship,” Terramorse said. “We’re just a ship that can come apart. Like a Transformer. We’re more than meets the eye.”

The barge was built in Maine in 1981; the Moku Pahu tug was constructed in Alabama in 1982. The whole ship is 685.5 feet long and 139 feet from the keel to the ship’s tallest point. It has two engines and six cargo holds capable of transporting nearly 40,000 tons.

It’s the only integrated tug/barge left in the world, Terramorse said. Built especially for the sugar trade, Moku Pahu once had 12 “sisters,” but since then they’ve all been scrapped or destroyed.

The tug/barge design came about in the 1970s, when shipping companies were trying to cut down on labor costs. 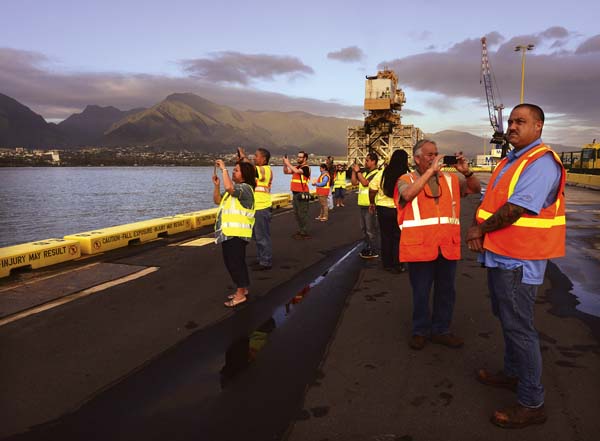 “What they came up with was an idea where you could get in an actual ship, but man it like a tugboat, so you have greatly reduced crews,” Terramorse explained.

Because tugboats don’t have the same crew requirements of larger ships, the Moku Pahu can operate with just 15 crew members. In the 1970s and ’80s, a ship the size of the Moku Pahu would have had a crew of about 35.

The Moku Pahu is owned by the Hawaiian Sugar Transportation Cooperative — of which HC&S was the last remaining member — and managed by Patriot Shipping.

After Matson stopped shipping molasses following a 1,400-ton spill in Honolulu Harbor in 2013, the Moku Pahu was refitted to pump and carry molasses on its own. The $3.5 million project took place in early 2015, said Glenn Wilbourn, executive vice president and general manager of Kahului Trucking & Storage, an A&B subsidiary.

“They had no idea (sugar would end),” Wilbourn said. “They wouldn’t have spent that money if they knew they were going to go out of business.” 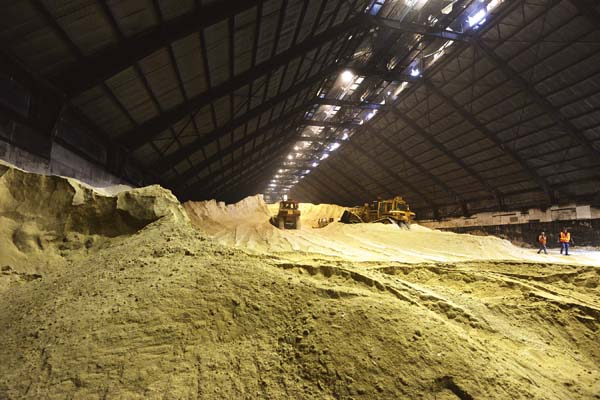 Bulldozers plow a hill of unprocessed sugar Wednesday inside Kahului Trucking & Storage’s sugar house as it slowly drops through vents in the floor onto a conveyor system that delivers the product to the holds of the sugar ship Moku Pahu. The Maui News / MATTHEW THAYER photo

Terramorse said that as soon as he heard HC&S was closing, “the whole ship knew about it, because I yelled out, ‘What the — I won’t finish that statement.”

The captain said he knew he had to be there for the final harvest.

Getting a grain of sugar from storage to the ship takes about five minutes, KT&S shop supervisor Michael Mendoza said. In the two buildings where sugar is housed, dozers push the mounds toward the middle of the floor, where it falls through openings onto a conveyor belt hidden below. 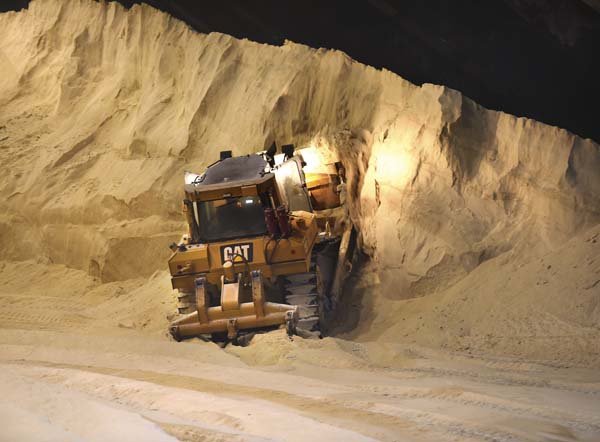 “Picture a crab hole in the sand,” Mendoza suggested.

Once the sugar is on the conveyor belt, it travels up and out of the warehouse through about a series of wooden tunnels until it reaches a divider. That splits the sugar into two chutes known as gantries, which pour the product into the cavernous cargo holds of the Moku Pahu.

“We’ll do this round the clock, 24 hours until we’re done,” Mendoza said.

If everything is running smoothly, the belts can transport 1,000 tons an hour and fill the ship in 40 hours.

As conveyor belts full of golden crystals zip past, 31-year veteran Dennis Nobriga meticulously records the tons of sugar going into the ship each hour. As the lead man for bulk sugar, he controls the flow using the divider. A red-and-white stripe on each chute helps him monitor the levels of sugar, and if one side gets too high, he turns a wheel on a cable system that will lessen the flow.

“It’s really primitive, but effective,” Nobriga said. “Nothing is really automated over here. It’s a lot of manual adjustments.”

He and mechanic Chad Toyama make sure everything runs smoothly. Toyama admitted the job can get boring at times, but he said the whole operation is impressive.

“It’s amazing how they figured out how to make all this, how they constructed everything,” said Toyama, who came up through HC&S’ apprenticeship program. “A lot of stuff is still running from when they first built it.”

Every 4,000 tons, Nobriga puts a sample of sugar into a bucket. The samples will go to Honolulu for analysis of the grain quality and molasses content. That helps determine how much the sugar sells for, Nobriga said.

Filling the Moku Pahu is a science of balancing sugar, molasses and fuel. In Kahului Harbor, the bottom of the ship can’t go deeper than 32.5 feet or workers run the risk of “helping dredge the harbor,” which has happened in the past, Terramorse said. Fortunately, Kahului has a “forgiving bottom.”

When the ship is full and the tide is right, the Moku Pahu will depart. Usually, it’s smooth sailing to California. But heading into winter, the last sugar voyage will “probably be a little bouncy.” It doesn’t take a huge storm to put the stern underwater when the ship is loaded, Terramorse said.

However, there’s little risk of losing the precious cargo.

“The only way we could possibly lose any sugar is if the ship turned upside down,” he said. “In that case, the sugar is the last of our problems.”

The journey takes a week with two engines running or 10 days with one. During the journey, crew members “get very used to routine.”

On board, crew members serve as their own fire department, police force and ambulance service.

“There’s a certain amount of excitement to that, a little adventure,” he said. “Although, I’m starting to get older, so that’s starting to die down.”

Terramorse has worked on the Moku Pahu for more than 20 years — longer than anyone else — and said the thought of the tug/barge going extinct is “devastating to me.” The future of the Moku Pahu depends on who buys it and the new owner’s plans, Wilbourn said. As for the 48-year-old Terramorse, who lives in Idaho with his wife and three kids, it’s unlikely he’ll be back to Hawaii unless a shipping company calls him on assignment.

“After 20 years, I feel half Hawaiian,” Terramorse said. “These are the waters I know. I can come in and out of Kahului with my eyes closed.”

From the first successful plantation on Kauai in 1835 to the last one on Maui in 2016, sugar has been intertwined with local life. It attracted a melting pot of workers and laid a foundation of success for countless immigrant families. It kept thousands of acres in agriculture and diversified Hawaii’s modern, tourism-based economy.

It also raised its share of controversy — some of which continues today — over the health effects of cane burning and the ethics of water diversion.

Since A&B made its announcement in January, 15,500 acres have been harvested, and 158,000 tons of sugar and 56,000 tons of molasses have been produced, according to HC&S. After it’s processed in the California & Hawaiian Sugar Co. refinery in Crockett, Calif., some of that sugar just might make its way back to the islands.

“I tell people when you’re eating out of that pink and white (C&H) bag, at some point you’re eating something that came from Hawaii,” Mendoza said. 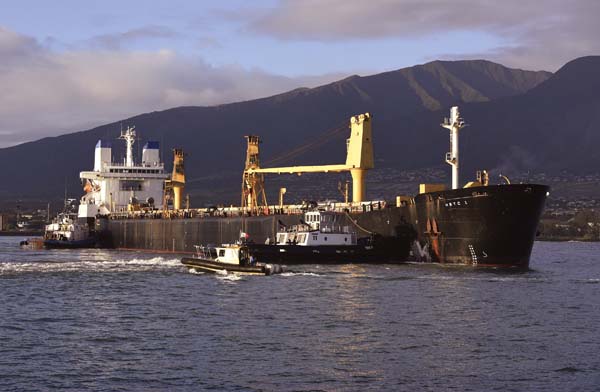 Tug boats turn the Moku Pahu inside Kahului Harbor as it prepares to get underway Friday morning. The Maui News / MATTHEW THAYER photo 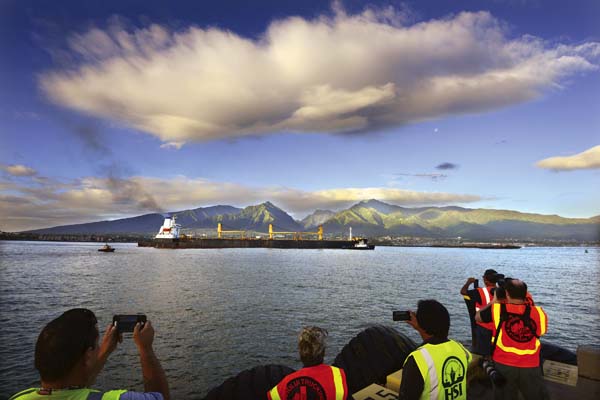 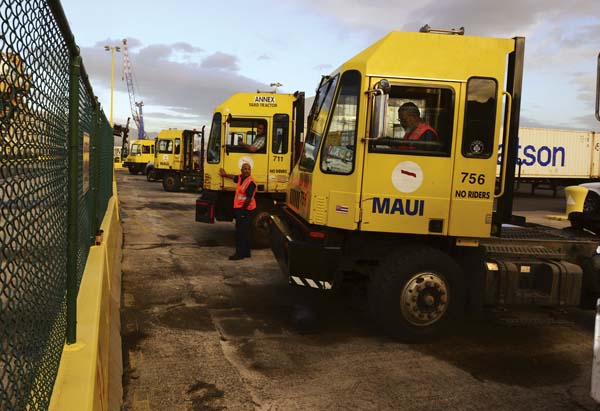