Moving from cane to cattle

A&B maps out a path to life beyond sugar 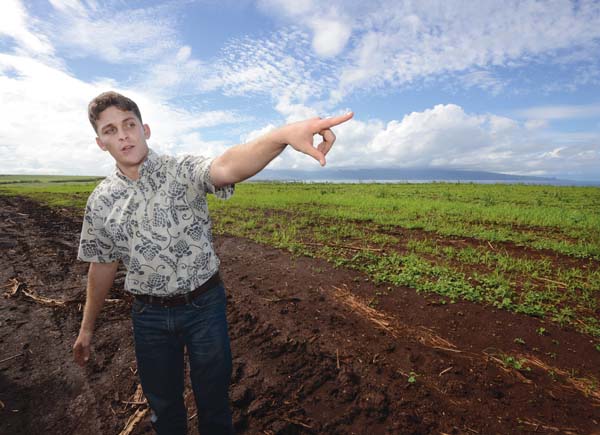 HAMAKUAPOKO — Growing Maui’s farm-to-table cattle industry is among the chief projects of Alexander & Baldwin as its 36,000-acre sugar plantation folds at the end of this year.

The parent company of Hawaiian Commercial & Sugar Co. plans to expand its cattle grazing operations to 4,000 acres and create an agricultural park Upcountry, projects that the company hopes will help ranchers and farmers sell their products locally.

“These cows, after they’re slaughtered and processed, would stay here on the island for local consumption,” said Jacob Tavares, project manager for livestock diversification. “So you can find it in the stores, in Longs and Foodland, in the local restaurants That’s a huge point of effort that we’re making here is to increase food security.”

Local ranchers “export calves to the Mainland because there’s not that high-quality feed source here on a consistent basis,” Tavares said. “We’re providing that bridge to allow producers to keep their product here rather than us importing steaks and exporting live animals.”

For months leading up to the closure of HC&S, everyone from politicians to community groups has weighed in on how former sugar cane lands could contribute to food production and sustainability on Maui. 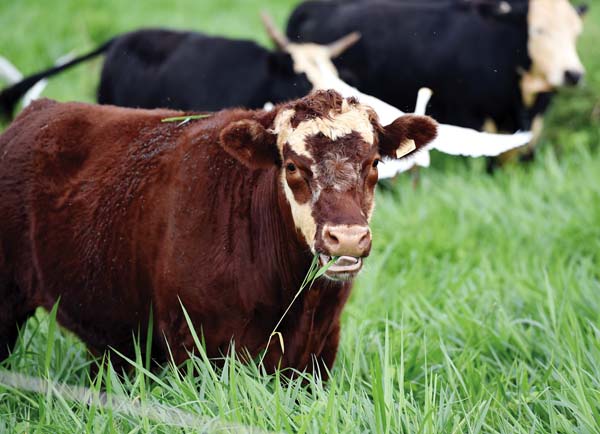 Cattle chow down after their daily move to a new section of irrigated pasture Monday in Hamakuapoko. The Maui News / MATTHEW THAYER photo

With A&B still testing different crops, right now the future of former cane fields is in a herd of 1,200-pound black-and-brown animals grazing the green pastures of Hamakuapoko.

For about a year, A&B has been testing different grasses with a herd of just over 100 cattle from Ulupalakua Ranch. As A&B seeds and fences more grass areas, Maui Cattle Co. plans to put about 1,000 head on this grazing land by next summer, Maui Cattle President Alex Franco said.

The cattle company is made up of six different ranching entities: Ulupalakua, Kaupo, Hana, Haleakala and Nobriga ranches on Maui, and Olumau Angus Plus on Kauai. Ranches will maintain ownership of the cattle and pay A&B for the weight the company puts on the cattle, Franco said. The company does its own beef processing and selling.

“It’s pretty much a game changer for us,” Franco said. “In our business, the biggest bottleneck that we face is drought conditions.  . . . One of the things we’re missing in our industry is the ability to put cattle on irrigated pasture under drought conditions to where we can still provide product to the marketplace on a consistent basis. That’s what A&B brings to the table.”

A&B currently has 3,000 planted, unirrigated acres for the project and plans to eventually add 1,100 irrigated acres, Tavares said. Test trials allotted 1.2 acres per head of cattle, but the company is still trying to figure out the ideal density for the animals, Tavares said. 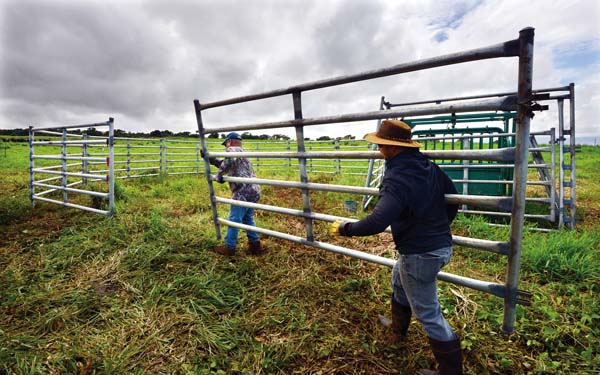 The company uses a method that prevents overgrazing and keeps the cows calm and content. The pasture is divided into sections, and each day the animals are moved to a different section to give them fresh grass and allow the grazed area 48 days to regrow to optimum size and nutrient level.

“It’s also good for the cows because you’re putting high-volume, high-quality grass in front of them every single day,” Tavares said.

“Part of the grazing strategy is to keep everything very low stress,” he explained. “Keeping an animal low stress is good for the quality of meat  . . . which is more of a tender meat cut with better marbling.”

Tavares said it’s a 10-month process to seed the ground and let the grass grow a root system strong enough for grazing. The company gets calves when they’re 6 to 8 months old and weigh 450 to 500 pounds. It takes them about 24 to 26 months to reach their “ideal finishing weight” of 1,200 pounds.

Ranchers aren’t the only ones hoping to get in on A&B’s agricultural plans. The company has gotten lots of interest from local producers eager to work the former sugar cane lands, said Jerrod Schreck, director of renewable energy and land stewardship.

“Many of them are smaller crop producers, so we think an agricultural park with shared infrastructure would make a lot of sense to help some of these folks,” Schreck said.

A&B is currently working with the county on a site near the Kula Agricultural Park, according to Rick Volner, HC&S plantation general manager.

“The current thought is that the ag park will be built out in phases based on demand and could total up to 1,000 or more acres ultimately,” Volner said. “The park will be open to all, but we continue to expect that former HC&S employees will be given a preference for leasing plots.”

Schreck said the company wants to hear from local farmers about the crops they grow, their experience and at what scale they plan to grow their crops.

Alika Atay, who won the Wailuku-Waihee-Waikapu residency council seat in the general election, said he was “happy to hear” that A&B is making steps toward local cattle production and involving farmers.

“I think these are all hopeful opportunities for the people of Maui County to participate in this transition,” Atay said. “We already know we already consume a lot of beef.  . . . Why not produce it so that it’s also slaughtered and butchered here on the island and giving local residents more opportunities for jobs?”

Atay, an organic farmer and a leader of the SHAKA Movement (Sustainable Hawaiian Agriculture for the Keiki and the Aina), said he planned to meet with A&B officials and representatives of the farming and cattle industries to learn how he can “assist or be part of the transition.”

“I’m excited for the future of Maui’s opportunities, seeing Maui be more productive in the area of food production and feeding people,” Atay said.

Dr. Lorrin Pang is also part of the SHAKA Movement and helped push for a voter initiative this year that would have allowed the county to take over A&B lands for organic farm production. (The initiative did not get enough signatures to be put on the ballot.) Pang said “we can walk the common path” with A&B but was concerned about what would happen “when somebody comes in with a lot of dollars and they want to grow things that are not for local consumption but have a lot of export value.”

“When push comes to shove, they might sell it off to the highest bidder,” said Pang, a state Department of Health Maui County District health officer who spoke as a private citizen.

He said there was no guarantee that A&B won’t burn crops, use pesticides or sell to foreign markets in the future.

For now, A&B is still testing crops that could take over after sugar — primarily sorghum, corn and oilseed crops such as sunflowers and soybeans that could be used for biofuels. Schreck said the company is looking at production costs, yields and pest impacts. He said it was “hard to say” how long research would take.

The offer of a bioenergy deal could send A&B “off to the races with bioenergy,” or a high demand for beef could increase pasture trials.

“It’s really going to depend on how the market responds,” Schreck said. “We know diversified ag is going to be really hard. We know it’s going to take a long time to get all these acres back into production. But we think we have some advantages that other plantations maybe didn’t.”

For one, A&B owns thousands of contiguous acres, most of which are designated as “important agricultural lands” by the state. The plantation is also close to the harbor, and much of the land already comes with up-to-date electrical and irrigation systems and roads.

“We have good conditions for potential success,” Schreck said.

Cattle chow down after their daily move to a new section of irrigated pasture Monday in Hamakuapoko. The Maui News / MATTHEW THAYER photo

No more sugar cane will be delivered from the fields of Maui. The last Tournahauler haul arrived at the Puunene Mill on Monday. The Maui News / MATTHEW THAYER photo

The Maui Planning Commission denied a special use permit so that Michael Baskin could legally operate the Paia Inn as a transient accommodation. The Maui News / MATTHEW THAYER photo

Gov. David Ige addresses the media Monday outside the soon-to-be-shuttered Puunene Mill. He was among the state, county and federal officials on hand to witness the last haul of sugar cane from the fields The Maui News / MATTHEW THAYER photo