Operations winding down at HC&S 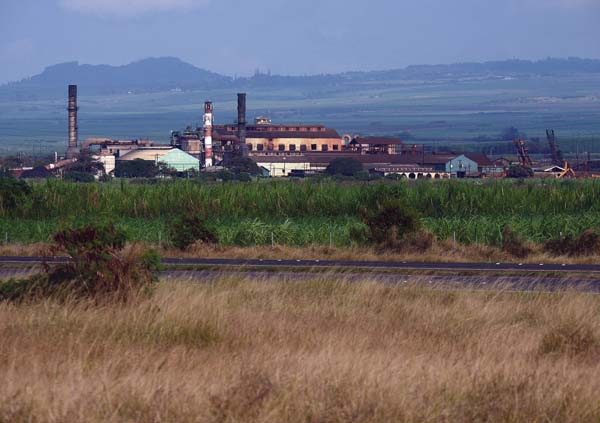 The Puunene Mill, which processes sugar cane from the fields into raw sugar and molasses, is scheduled to go dark Dec. 23. The Maui News MATTHEW THAYER photo

Hawaiian Commercial & Sugar Co. will wind down its operations over the next two weeks — with its last cane burn scheduled for Saturday and last cane haul to the Puunene Mill on Monday — as the plantation prepares to close its doors at the end of the year.

The final cane burn date is tentative and wet weather may change the plans, a company official said Monday. Recent inclement weather has led HC&S to green harvest, rather than burn fields. The cane is cut and pulled from the fields and taken to the mill, which processes the cane less efficiently than through burn harvesting because the leafy material remains on the stalks.

There also is a possibility that not all of the cane fields will be harvested before the closure, the official said.

The symbolic last Tournahauler cane haul from the fields to Puunene Mill is scheduled for Monday.

The Moku Pahu, the sugar ship that will take the processed cane to the C&H refinery in California, will dock at Kahului Harbor on Monday with the loading of sugar from Kahului Trucking & Storage warehouses on Dec. 14 and 15. The Moku Pahu is scheduled to depart early Dec. 16 at high tide because of the weight of the full load of sugar.

Puunene Mill most likely will see its lights go dark Dec. 23. There is some clean up required following the end of production, HC&S said.

The remaining employees facing layoffs will stay on the payroll until Dec. 30, even as the mill shuts down prior to that date, the official said. Of the 675 workers that began the year with HC&S, 370 employees still are on the job, and 350 will be laid off at the end of the year.

Of the 20 remaining employees, six will be temporary workers into 2017. Eventually, 14 employees, mostly tied to diversified agriculture, will be all that’s left of the HC&S workforce, the official said.

So far, 141 of those laid off have found other jobs. Another 55 left HC&S before their layoff dates for other positions, 57 retired and a dozen moved off-island, according to HC&S.

Alexander & Baldwin, the parent company of HC&S, announced in January that the last sugar plantation in Hawaii will shut down at the end of the year, citing $30 million in losses from its agribusiness sector in 2015 with a future of more “significant losses” that officials at A&B called unsustainable.

HC&S, which had 36,000 acres in sugar production, will turn to diversified agriculture, company officials have said.

The company has made transition coordinators available to employees, and county, state and federal help has been offered with unemployment compensation, job training and other support. Community efforts also have been organized to help sugar workers.