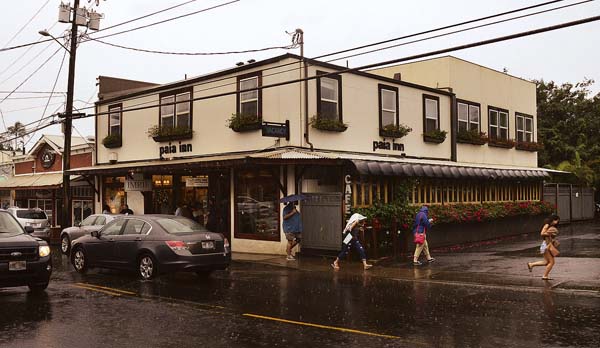 The Maui Planning Commission denied a special use permit so that Michael Baskin could legally operate the Paia Inn as a transient accommodation. The Maui News / MATTHEW THAYER photo

Commissioners said Baskin’s previous problems with the county were a reason for denying the permit. In late July 2015, the county levied fines and violations totaling $500,000 against Baskin, the largest amount ever levied by the Maui County Department of Planning. Baskin violated laws concerning short-term rentals, special management areas, zoning and building codes. Baskin still owes the county $190,000; he said Tuesday that it will be paid next month and that he had been granted an extension until then.

Planning Director William Spence told The Maui News last week that since the settlement, new violations have come up: Baskin has opened up a cafe at the inn without adding the required parking stalls and obtaining proper permits; signs were also put up without permits.

Every commissioner, except Chairman Max Tsai (who doesn’t vote unless there is a tie) gave their reasons for the denial, which included community opposition to the Paia Inn, which some see as a hotel, along with Baskin and his family’s  multiple short-term rentals in Paia and issues with Baskin’s character.

Commissioner Richard Higashi said he felt he was getting the runaround when asking Baskin questions, saying “the applicant should be able to say ‘yes’ or ‘no’ ” and not beat around the bush.

Commissioner Lawrence Carnicelli pointed out that Baskin said a brochure that advertised several properties for sale was a draft and it wasn’t sent out to the public. But a testifier pointed out that a Pacific Business News article showed otherwise and Carnicelli looked up the story during the meeting to confirm there was a sale advertised with Baskin quoted in the article.

He pointed out that under a bill passed two years ago by the Maui County Council, he is allowed to have up to 12 transient vacation rentals in Paia town. He said the motive for the bill was to push the TVRs into business districts.

While testifiers and commissioners spoke to the community plan, which does not allow hotels in the area, Baskin said the plan is about 21 years old and pointed to the more recent ordinance that pushed TVRs into business districts.

Baskin and his supporters said they have been treated unfairly by the county and allege they have to jump through more hoops than others to receive their permits. Some of the 35 or so employees of the inn, which include landscapers who also take care of the other short-term rentals, say that they make sure they clean up their properties, as well as neighboring properties.

Francine Aarona, a longtime Paia resident who lives next to one of Baskin’s properties, asked for a denial of his application.

She said that when Baskin bought the property, he told her that it would be for his parents, who wanted to move from Upcountry to someplace warmer. But then she found out that the home was made into a rental when she saw tourists there.

“So that saga begins at that point on,” she said.

Aarona took issue with some of Baskin’s marketing material, in which he called a beach near her home a private beach. She said her family has strong ties to the beach, where they have scattered their ancestors’ ashes.

Another testifier, Martin Brass, a partner in the Flatbread Co. in Paia, who was testifying on his own behalf, also asked that the permit be denied.

He said although Baskin claims that there has been historic use of the Paia Inn as lodging, others have not used it as such, so there is no grandfathering of the practice.

He also said that with Baskin saying that the inn has enjoyed 15,000 bookings and has 35 employees, it’s hard to imagine that the operation is not a hotel.

During the meeting, commissioners also took up Aarona’s petition to intervene, which the commission denied.

The Maui News A threat to lay off more than half of its reporting staff did not materialize at the Honolulu ...

The county pool reservation phone line will not be taking calls Friday due to the Fourth of July holiday. Pools ...

The state Department of Land and Natural Resources has been issuing hunting licenses and stamps since June 15 for ...

The 94 degree high temperature Monday at Kahului Airport broke the record for the day set in 1980 by one degree, ...