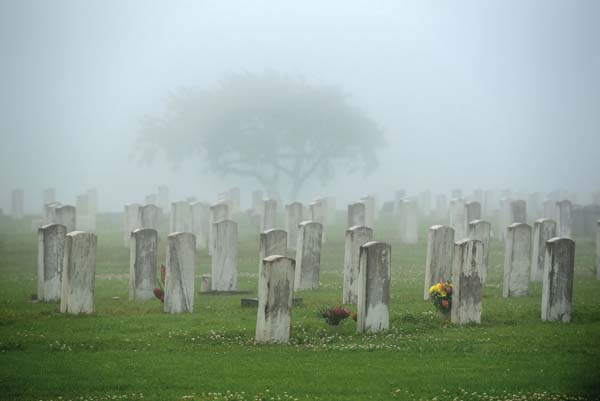 PUUNENE — Eight hours of face-to-face deliberations between officials and supporters of the Maui Veterans Cemetery and the Makawao Cemetery Association on Tuesday appear to have resolved a dispute that at times has led to a contentious relationship between neighbors over the past few years.

“We shook hands and there was smiling and hugs and pats on the backs,” said Camille Lyons, president of the Makawao Cemetery Association, on Thursday. “It felt like we can be friends again, because we love the veterans, and we’re good neighbors.”

The MCA met with state and federal veterans officials, Mayor Alan Arakawa, county Public Works Director David Goode, local veterans and other groups to resolve lingering issues between the two cemeteries. Veterans groups have sought to expand and remodel the cemetery for several years in an effort to achieve “shrine status” — the highest honor for a veterans cemetery.

But the main reason for the expansion was the dwindling number of burial plots for veterans, which had reached critically low levels in recent years. State officials said Tuesday that there currently is no issue with burial space. There are 27 burial and urn plots available, but there are 500 burial crypts that could be used if needed. The areas around those crypts have not yet been sodded due to weather.

The MCA expressed concerns over the impacts of the $6 million  remodel and expansion on its cemetery. In 2015, the association sued state and federal veterans affairs agencies, complaining about use of a shared parking lot, a gated entrance, the removal of trees and other aspects of the project. 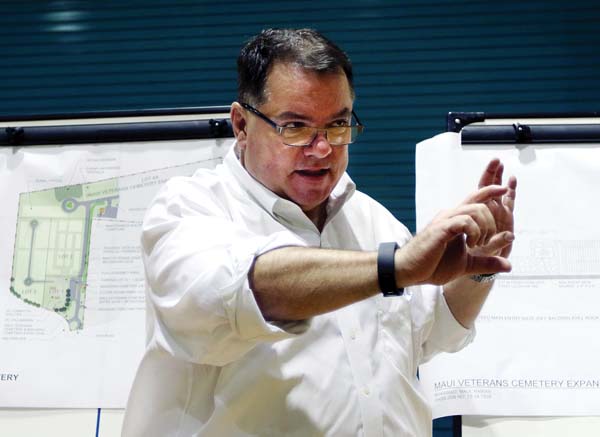 In November 2015, the project was found to be noncompliant with the National Historic Preservation Act and put on hold. The sides met in February to discuss how to avoid and/or mitigate impacts to the Makawao Cemetery and an agreement was reached allowing expansion work to resume as long as there was no construction in the parking lot area, which was a major point of contention.

Lyons said Tuesday’s meeting was the first time that her group met in person with major “decision makers” since negotiations began in 2012. She said some prior discussions have been “very caustic, where both sides went away feeling really upset with each other.”

She thought that the state blamed the association for preventing it from building more burials due to the lawsuit. At the end of last year, veterans had feared Maui’s only veterans cemetery would run out of space before the summer, which would possibly force veterans to be buried elsewhere.

“It was unnecessary by the state to use that tactic of pitting the VA against the Makawao Cemetery,” she said. “It was totally unnecessary and made a lot of people unhappy and angry because that wasn’t our goal.”

VA officials from Oahu and Washington, D.C., were on hand Tuesday night to present an updated plan for the expansion and refurbishment of the veterans cemetery during a public meeting at the Hawaii Army National Guard Puunene Armory. The revisions reflected changes that had been made as a result of the deliberations that took place earlier in the day, they said.

“We struck quite a bit of concessions on both sides to make it work,” Col. Ronald Han Jr., director of the state Office of Veterans’ Services, said after Tuesday’s meeting. “They’re (MCA) in the process of putting the final things up, but we’re very optimistic. I would say there’s still some lawsuits looming overhead, but that wasn’t the topic of discussion.”

Han said that there were “a lot of misconceptions” entering the meeting around the shared grass parking lot, a gated entrance that would be closed and block access, the height of fencing and other issues. He said that the gate will remain open at all times and designs show the walls of the gate to be about 3 feet high with entry signs on both sides.

“I think a lot of the hold up was seeing and believing — and sitting in a room for eight hours and showing things,” he said. “This is all being done by the federal government, and they made it a point to try and show how important the MCA is by actually making a placard for them to show that this is a partnership. We always endeavored to do that. Sometimes along the way there’s issues, but you just got to work through it and that’s what we did today.”

Other concessions included eliminating plans for 17 paved parking stalls along the outer wall of the Makawao Cemetery and keeping it as a grassy parking area that will be maintained by the county. Two historic Cook Island pine trees near the entrance of the Makawao Cemetery, which had been slated for removal, will remain.

Lyons said that the green space and trees maintain the location’s 19th-century, rural garden cemetery design, which is very different from the industrial-style cemeteries, such as their neighbor. She appealed to the public to respect the grassy parking area, “which has been abused in the last 15 to 20 years.”

She commended the county for stepping up and hopes that the Maui County Council will agree to take care of the grassy area.

Goode, whose department maintains the cemetery, said that he was happy to participate in the meeting and thought it was “quite positive.” He noted that the council has allocated money for an additional full-time employee for the veterans cemetery due to the expansion and is in the hiring process now.

The state paid $765,000, using general obligation bond money, to acquire an additional 10 acres for expansion of the cemetery in 2014. Officials only plan to use about 3.5 acres of the land during the first phase of work, which calls for about 500 precast concrete crypts and space for almost 300 urn burials, said project coordinator Gina Ichiyama of the state Department of Accounting and General Services Public Works.

A retention basin, maintenance building with a water tank and space for overflow parking also are included in the expansion, Ichiyama said.

Work on the existing cemetery includes a road system traveling to the expansion area which would be wide enough for two-way traffic and parking on one side of the street, Ichyama said. She said that the existing flagpole near the beginning of headstones in the cemetery will be moved to the memorial monuments area near the pavilion.

Future work includes realigning the upright grave markers and electrical, waterline and grading improvements. Han said that federal officials plan to start working on codifying a memorandum of agreement next week and will have another follow-up session with parties.

MCA attorney Isaac Hall said that both sides are aiming for the end of February or March to have something in writing. He said that work would not be allowed in the shared parking lot area until that process is completed.

“I think everybody does feel better,” he said. “There are issues that remain, but the biggest issues have been resolved. I feel very happy this wonderful historic place has been protected.”

Lyons agreed that “a lot of headway” has been made and said that she is happy the VA and county are working with MCA.

“I definitely see a positive relationship going forward,” she said. “I think we’re all going to be working together. A hiccup would be if the consultant draws up the memorandum of agreement and changes things around, but if it comes back with everything we agreed upon, I think everyone is going to be a happy camper.”

In this Monday, Dec. 12, 2016 photo, the U.S. Coast Guard Cutter Polar Star rests by a dock in Pearl Harbor, Hawaii. The only U.S. ship capable of breaking through AntarcticaÕs thick ice is undergoing repairs in balmy Hawaii this week as it prepares to head south. (AP Photo/Audrey McAvoy)