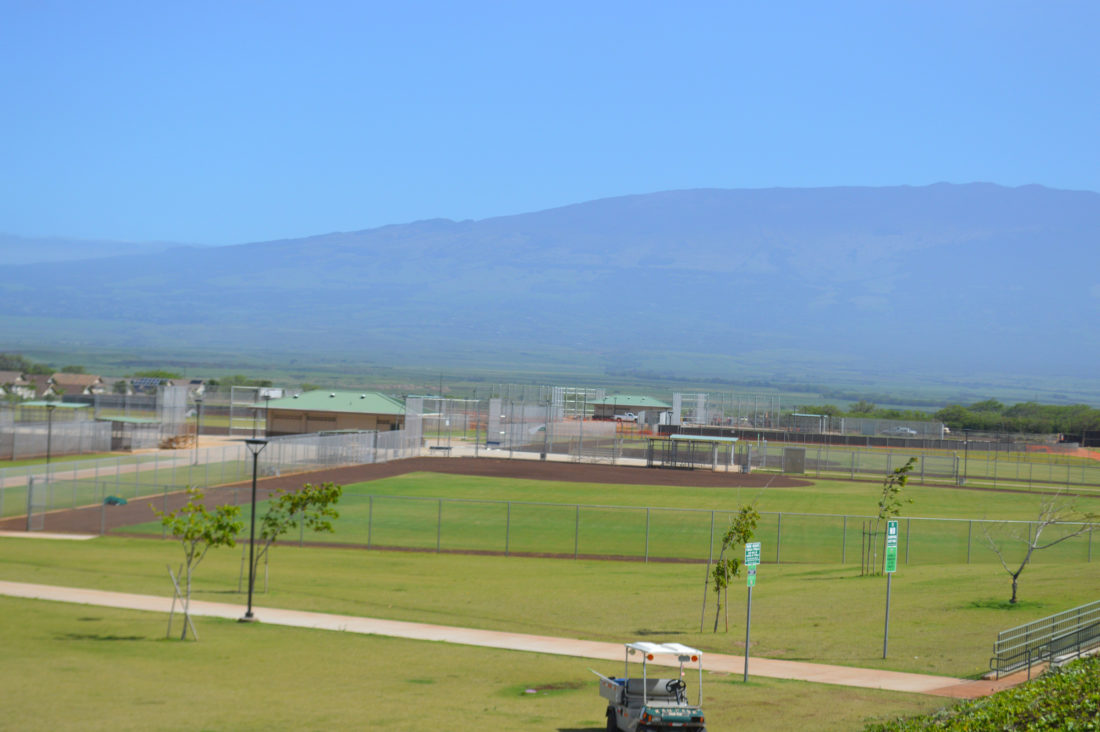 Phase 2 of the Central Maui Regional Sports Complex was completed late last year. It includes more playing fields and parking spaces. The state is taking the lead in the construction of the park with Maui County taking over its management, including maintenance. The Maui News / MELISSA TANJI photo

Already in operation are a multipurpose field, two regulation softball fields and nearly 200 parking stalls that were completed as part of the first phase, which opened March 12 and cost approximately $14.8 million. The total project is expected to cost about $22 million, according to estimates by the state.

The park is being built by the state, but the county will be in charge of maintenance and management. Currently, workers assigned to other county properties are being used to help maintain the complex, said Parks Director Ka’ala Buenconsejo.

“Right now we are just pulling from everywhere,” he said Monday. He added that some workers are on overtime when they work at the complex.

Because the complex is expanding, the parks department will be asking the Maui County Council’s Budget and Finance Committee today for the six new positions, along with $158,000 for maintenance supplies and utility costs. The $158,000 is unusued carryover savings, said Maui County Communications Director Rod Antone. If the request is recommended for approval, it will advance to the full council. The meeting is at 9 a.m. in Council Chambers.

Buenconsejo said that the parks department will not ask the council to release funding for the new positions this fiscal year because the department is able to use funds from current vacancies to pay salaries. He said that it may take about three months anyway to hire for the positions, which would be near the end of this fiscal year June 30. The department can then ask for funds for the new positions in the fiscal 2018 budget.

Buenconsejo said that the new staff will also maintain the nearby 14-acre Maui Lani Parkway park.

Buenconsejo said that park is currently owned by Maui Lani. It has two soccer fields and open space that could be developed in the future. The park will be turned over to the county in the next few weeks. It is part of a “park assessment” tied to the Maui Lani development approval.

As for Phase 3 of the Central Maui Regional Park Complex, Buenconsejo said it will consist of four youth baseball fields, two soccer fields and more parking. Eventually, around 700 parking stalls are expected.

Buenconsejo said that the regional complex is “highly used,” currently for girls softball and flag football. Soon it will be T-ball season.

The park initially faced a legal challenge from neighbors. A 2nd Circuit Court judge in late 2014 dropped most of the major claims in the lawsuit, saying that the time had passed for homeowners to pursue their claims.

Park neighbors had complained about increased traffic, lighting, noise and the possibility of lower property values from being close to the sports complex. Currently there are no lights for night play.

However, the project was backed by other community members, especially those with children, who maintained that more ballfields were needed.

Tom Pierce, attorney for Maui Lani Neighbors Inc., said Monday that the group  has filed an appeal with the Hawaii Intermediate Court of Appeals and is waiting for its ruling.