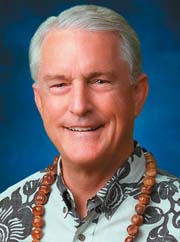 The Maui County Board of Ethics has whittled down a complaint against council Chairman Mike White over his organization of the Maui County Council and will hear the remaining allegations at its Feb. 8 meeting.

The board held an informal hearing Jan. 11 on the complaint filed by Mark Sheehan of SHAKA (Sustainable Hawaiian Agriculture for the Keiki and the ‘Aina) Movement and SAFE (Sustainable Action Fund for the Environment) on Dec. 19.

Sheehan argued that White used the chair’s office and resources to organize the council with himself as chairman and Council Member Bob Carroll as vice chairman and announced the arrangement in a news release Nov. 11.

Sheehan alleged violations of County Charter sections related to the council and its procedures, meetings and rules that say that the council shall meet on the second day of January following the election to elect a chairperson and vice chairperson.

He also argued that by declaring himself chairman, White had secured five votes, or a majority of the nine-member council, in violation of charter sections on the council related to voting.

In addition, Sheehan said in his complaint that White violated charter code of ethics prohibitions by offering leadership and committee positions in order to secure his majority and by using county personnel or property for noncounty purposes.

Ethics Board Chairman Randol Leach said in a letter to Sheehan on Jan. 13 that the board was dismissing all allegations in his filing, except for the ones pertaining to the code of ethics violations. He said that the other allegations “either do not come within the jurisdiction of the board, are speculative and/or because the complaint on its face did not allege sufficient facts to constitute such other violations.”

The remaining allegations will be heard at an informal hearing at 12:30 p.m. Feb. 8 in the Mayor’s Conference Room in the county building. Leach said that the purpose of the meeting is to give both Sheehan and White an opportunity to address the allegations in executive session.

The board then will determine if there is probable cause for a code of ethics violation, Leach said in the letter. If there is no probable cause, the panel will not render an advisory opinion.

Sheehan said Friday that he will be attending the hearing, but “given the way the system is rigged, I don’t expect a whole lot more.”

“The Board of Ethics dismissed the majority of the unsubstantiated claims and after hearing the facts,” White said, “I believe they will dismiss the last standing complaint, which calls into question the use of county resources.

“I have always used county resources appropriately and with the highest ethical standard. The organization of the council directly relates to county business.”

All were done “as official council business,” he said.

“It is time to put aside this election rhetoric and partisan politics and get to work, tackling important issues on behalf of the people,” White said.

Sheehan questioned the work of the Ethics Board behind closed doors with a county attorney who also serves that mayor and council.

He also said that White was using “fear and intimidation” in firing council staff and railed against the “authoritarian style” of White, who was re-elected council chairman during a meeting Jan. 2.