Farmers get tips in battle against coffee berry borer 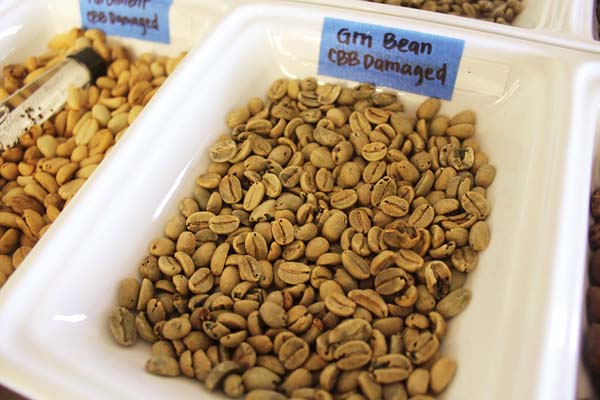 A sample of green coffee beans damaged by the coffee berry borer sits on display at the Kula Community Center during an informational meeting for local coffee farmers Monday. Last Thursday, the state Department of Agriculture reported an infestation in East Maui. If Maui residents are diligent, the beetle population can be caught early and controlled, experts said. The Maui News / COLLEEN UECHI photo

Clive Drew was planning on buying 1,600 coffee trees to grow in Omaopio this year when he found out the coffee berry borer had made its way to Maui.

“The number one thing is, do I really want to do it?” Drew wondered Monday.

Drew isn’t ready to abandon his coffee-growing hopes yet, but he and other farmers will have to be alert and active in fighting the spread of the invasive beetle across the island.

“On the Big Island, people are still able to keep it down under 5 percent damage, so you’re within specialty coffee standards,” said Andrea Kawabata, assistant extension agent for the University of Hawaii College of Tropical Agriculture and Human Resources. “But it does take money, time.  . . . It’s not an impossible thing to control CBB.” 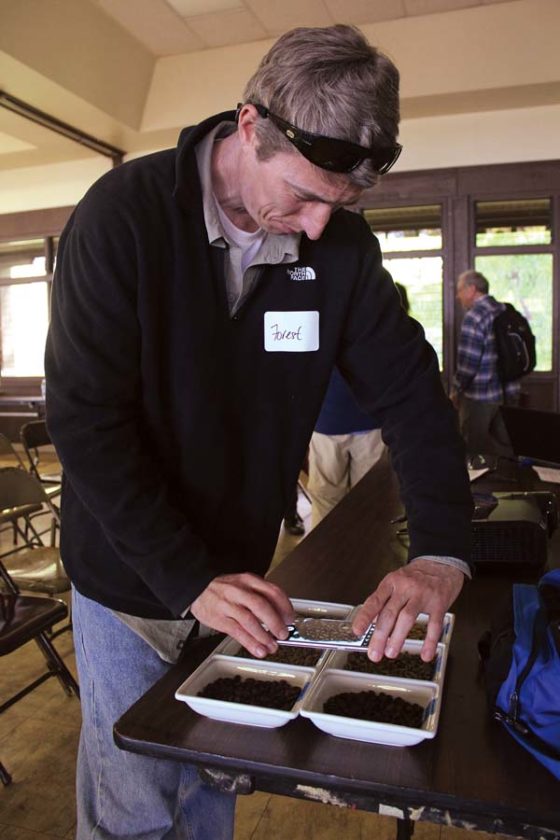 The beetle is found in just about every coffee-growing region around the world and is considered one of the worst coffee insect pests around, Kawabata said. It affects both green and ripe cherries, entering from the flower end and waiting until the seed hardens before it bores down and starts damaging the seed. Once inside, the beetle lays eggs that grow into adults and continue to consume the bean.

The beetles prefer higher elevations and cool, humid climates. Measuring just 1.5 millimeters (1/16th-inch) in length, they can easily be transported by a gust of wind or on clothing or equipment.

“They would rather not fly, because once in the sun and in low humidity areas, they will dry out, desiccate, and they can die,” Kawabata said.

In order to stop the spread of these pests, farmers have to be on the lookout, constantly monitoring their trees, Kawabata said. UH-CTAHR outlines four major steps for managing the beetle: field sanitation, field monitoring, coffee borer control and harvesting. 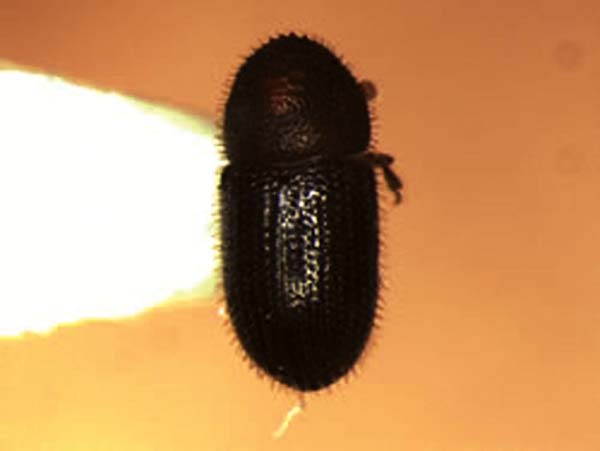 This is a photo of an adult coffee berry borer found on Maui. University of Hawaii College of Tropical Agriculture and Human Resources photo

“There’s no silver bullet,” Kawabata said. “You have to do everything in combination with each other.”

Field sanitation is “the most important control measure,” Kawabata said. She encouraged farmers to remove old raisins, which are potential breeding sites for beetles, and to strip pick (removing all the beans) depending on the time of year. Strip picking can take place at the end of the harvest in November to January, and prior to pruning. A preseason strip pick in February to March can also help reduce beetle populations.

Pruning down to a stump is also helpful, not only for plant health but to clear the area of potential beetle breeding grounds. Selective pruning isn’t effective; farmers must do it in large sections, Kawabata said.

Another crucial step that farmers must take is field monitoring.

“You don’t want to put all this time, all this money into protecting this crop from CBB and find out you were spraying too late,” Kawabata said.

Farmers should note major events, such as flowering times, harvesting, pruning and rainfall. About 30 days after flowering, farmers should start taking green berry samples from at least 30 trees within a 2.5-acre parcel, or 12 trees per acre for smaller farms. Monitoring should continue throughout the harvest, and knowing how widespread the infestation is will help in controlling the beetle population.

For now, sprays containing a fungal spore known as beauveria bassiana strain GHA are the best known methods for killing the beetle, Kawabata said. The beetle will pick up the spore, which will germinate, enter the beetle and kill it, Kawabata explained.

CTAHR recommends spraying “as often as sampling warrants or at least once a month.”

Organic sprays are available — Mycotrol WPO and ESO contain this fungus and are both approved by the Organic Materials Review Institute.

BotaniGard MAXX is another spray that contains the fungal spore, but it has not been tested in Hawaii and is not organic.

Kawabata said users should wear covered clothing and be aware of any allergies they may have when spraying. While some of the sprays are organic, they are still pesticides. She said that, as long as users follow the label and spray only where allowed, “there shouldn’t be any problem.”

One spray that won’t kill is Surround WP, which leaves a thin clay film on coffee plants that the beetles tend to avoid. But simply chasing away the beetle, instead of killing it, does leave the potential that the beetle can return, Kawabata said.

“There is a potential that the farmer can use everything except the spray, but maybe only on a small scale,” Kawabata said. “They could use stump pruning every couple of years and make sure that they’re on top of their harvest — harvesting every two to three weeks.”

Farmers can also opt to raise flat bark beetles, a predator of the coffee berry borer.

Lastly, when harvesting, farmers should take care not to leave cherries and raisins on the ground that could harbor the beetle, Kawabata said.

Harvests, if done frequently and thoroughly, can help disrupt the beetle’s breeding cycle.

The beetle can also be killed in the wet mill or dry mill process, but farmers must take care to transport the cherries in well-sealed bags. Beetles can escape the burlap sacks commonly used to bag coffee, so CTAHR recommends lining the interior with plastic bags.

On his 1-acre coffee farm in Keokea, Erik Andersen of Maui Coffee Estate does everything but roast his beans.

He said he’s “not surprised” that the beetle made its way to Maui.

“Hopefully, we’re somewhat protected (Upcountry) because most of our farms are far away from each other,” Andersen said.

“Like in Kona, they’re neighbors, so it can go from field to field.”

For Andersen, a beetle infestation “could be devastating since I have just 1 acre.” But being a small farmer also has its perks.

“The advantage of being a small farmer is that I can monitor my whole field relatively easily,” he said. “I almost know each tree by name.”

Andersen won’t start harvesting until February, so he’s in the process of pruning his 350 trees and assessing their health.

“I’m still processing the whole thing, so I’m not sure exactly what to do,” Andersen said.

“I’ve just got to go home, look at my coffee, and just assess it tree by tree.”

Drew said that he had been planning to start his farm on 2 acres in Omaopio. He hopes the beetle will be less inclined to thrive there, at a lower elevation and drier environment than Kula.

“I think I’ll still give it a run,” he said. “But I know I’ll have to follow the IPM (integrated pest management) measures.”

He added that he has “no intention” of running tours at his farm.

“That just brings in infestation,” he said. “With CBB you’ve got to have almost a quarantine-type environment.”

Forest Starr, an early detection specialist with the Maui Invasive Species Council, said that residents who think they may have an infestation should contact the state Department of Agriculture directly. MISC handles eradication efforts, but the coffee berry borer is past that point, Starr said.