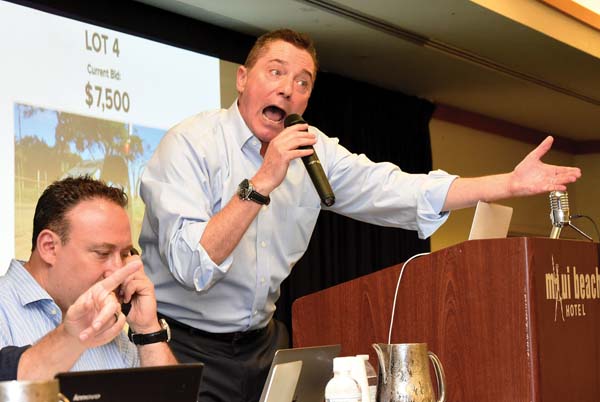 KAHULUI — It was standing room only for the more than 250 people at the Maui Beach Hotel on Wednesday who crammed into a hotel ballroom to try and fetch a good deal on Hawaiian Commercial & Sugar Co.’s red pickup trucks, small farming equipment, machine shop items and even microscopes and scales.

It was the first day of a two-day auction run by California-based Global Partners, which is assisting HC&S in selling its equipment and vehicles after the shutdown of sugar operations in December.

The auction concludes today with the sale beginning at 10 a.m. and expected to last until 3 p.m. in the elleair Rainbow Ballroom. Buyers also may access the auction live on the internet at gaauction.com.

Auction officials said that about 1,000 people had registered online Wednesday, prior to the auction start time. The numbers do not include the more than 250 bidders at the hotel. An hour prior to the auction, the Maui Beach parking lot was full, with some people parking in an overflow grassy area. Auctioneers said that about 700 lots would be auctioned off Wednesday and today. Wednesday’s auction lasted until about 3:30 p.m. 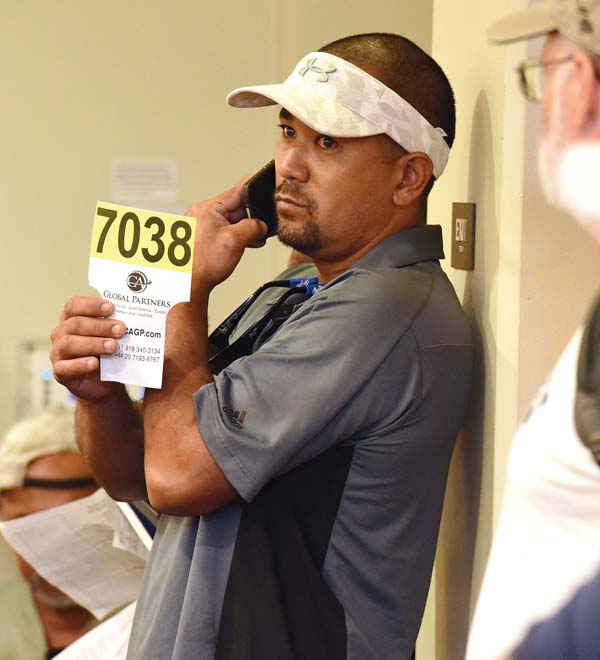 At the start of Wednesday’s auction, a hot item was the John Deere Gator, an all terrain vehicle. Bids came flying from the audience and the internet for the green multipurpose vehicles. Winning bids for the initial round of Gators were around $7,500, but by 1 p.m., the Gators were going for nearly $8,000 and up. A 2015 Gator sold for $9,500.

Pat Borge of a Hawaii film trucking company snagged several of the Gators in the initial rounds. His winning bids hovered as high as $8,000 to a low of $6,750.

“I not pau,” he said as he took a break outside the ballroom.

He said he was going to try and get more Gators to use for the trucking business that is based on Oahu. Gators retail for around $13,000 new, so with the auction price he is saving around $4,000.

Auctioneer Joe Teipel warms up the standing-room-only crowd before the HC&S equipment auction at the Maui Beach Hotel on Wednesday. The Maui News / MATTHEW THAYER photo

“I wish the a.c. (air conditioning) was higher,” Borge said as the ballroom got warm with the amount of people huddled in.

Before the auction began, Woessner said he was hoping to spend around $3,000 or so for a Gator. He owns 2 acres in Hana and said the Gator, a four-wheel drive vehicle, would be handy to have around the ranch.

Palos wanted a Gator so he wouldn’t get stuck in his pasture. He also was looking for a good price on a drill press.

Palos worked for HC&S for 40 years before retiring around three years ago. He was a machinist for 20 years, moved to drip irrigation and then planting, where he was a supervisor. 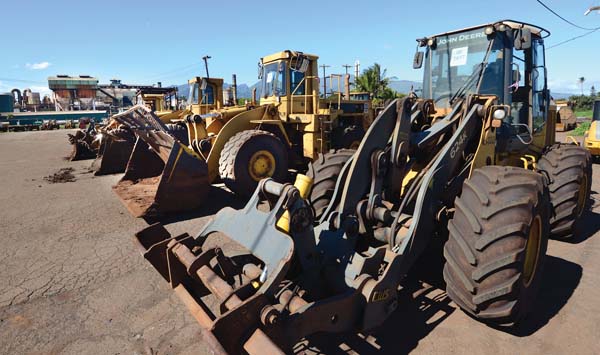 Puunene Mill’s heavy equipment is scheduled to be auctioned off today at the Maui Beach Hotel. The Maui News / MATTHEW THAYER photo

Also looking for a Gator and possibly a small Bobcat was Vince Bagoyo. He bought a farm in Kula and is hoping to grow fruits and olives and to raise chickens for eggs. “Things we can eat,” he said.

“I’m excited,” he said as he surveyed the full room before the auction began.

Bagoyo, whose father was a sakada, one of the first Filipino contract sugar laborers in Hawaii, said he went to the mill to see the equipment Tuesday. “It was very nostalgic,” he said of this visit.

In the initial rounds of Wednesday’s auction, Bagoyo unsuccessfully bid on a Gator.

The auction also attracted buyers from other islands in person. This included Hawaii island residents Chris Greenwell from Waimea and Mark Mendes of Paauilo. They said they were looking for good deals and did a site inspection of the items on Tuesday at the mill.

Asked if they saw anything good at the mill, Greenwell responded: “I guess everything looks good to the right person.”

Greenwell, whose family owns Palani Ranch in Kona, walked away Wednesday with at least two lots of lathes for less than $1,000. Those were personal items and not for the ranch, he said.

Also popular were Toyota Tacoma and Ford trucks. Most were red, a signature of HC&S trucks.

Other items sold included a microscope for $400.

Mark Weitz of Global Partners and one of the auctioneers told the audience that removal of sold items could begin Friday morning. Pickup is between 8:30 a.m. and 5 p.m. and at the same time Saturday. There will be no pickup Sunday.

Auctioneer Joe Teipel warms up the standing-room-only crowd before the HC&S equipment auction at the Maui Beach Hotel on Wednesday. The Maui News / MATTHEW THAYER photo

Puunene Mill’s heavy equipment is scheduled to be auctioned off today at the Maui Beach Hotel. The Maui News / MATTHEW THAYER photo