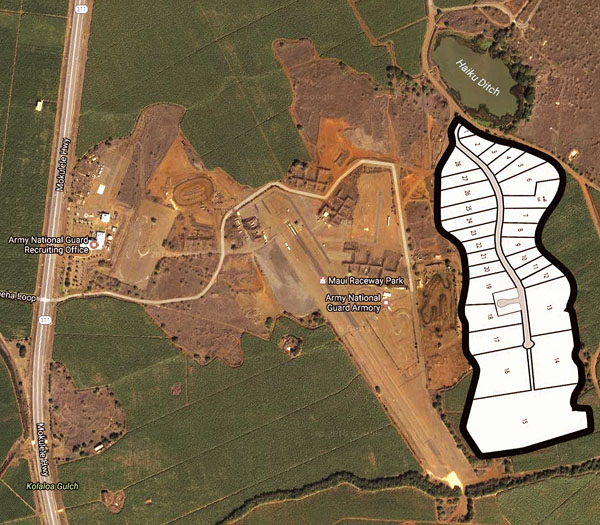 The Pulehunui Industrial Park is Maui’s first and only heavy industrial-zoned subdivision. Lots range from a half acre to 15 acres. The subdivision is part of the state’s Pulehunui Master Plan project. The project, introduced in 2012, originally called for light industrial, business and commercial activities as well as heavier industrial activities farther away from Mokulele Highway. Commercial Properties of Maui photo and Google Maps

Developer CMBY 2011 Investment LLC is selling the lots for $16 to $24 per square foot as part of the Pulehunui Industrial Park, according to a news release from Commercial Properties of Maui, the broker for the project. The size of the lots range from about a half acre to 15 acres.

Many of these heavy industrial uses typically require short-term county special use site permits, which expire and need to be renewed repeatedly, Churchill said. He said the cycle of permit renewals causes uncertainty for businesses; the new zoning designation for the lots eliminates those concerns and the short-term permits.

Sale prices for the lots are “considerably lower” than other industrial land in Central Maui, Churchill said. He said construction is estimated to begin in the April-to-June quarter with lots ready for use next year.

Churchill did not release the cost of developing the heavy industrial park.

Goodfellow Bros., the parent company of a CMBY affiliate, is the civil contractor for the project’s infrastructure and already has reserved a 15-acre lot for its new Maui field operations and baseyard facilities, broker Ben Walin of Commercial Properties of Maui said.

Goodfellow Bros. plans to use the new space to store heavy equipment and to stockpile material between jobs, Churchill said. He said the company’s current baseyard near the Kihei wastewater treatment plant will continue to be utilized.

CMBY is an affiliate of Pacific Rim Land, which is the development arm of Goodfellow Bros.

Walin said that interest in the industrial park is “strong.” “Our price point is very attractive compared to other industrial zoned properties in Central Maui,” he said.

Many plans have been floated for the Pulehunui area, including a new jail to replace Maui Community Correctional Center and a new motor sports park. A state master plan for the nearly 1,000 acres of state land from the old Puunene Airport to the National Guard Armory calls for light industrial, business and commercial activities along both sides of Mokulele Highway with heavier industrial activities set further away from the artery connecting Central and South Maui.

The state Department of Land and Natural Resources already is planning to develop a new baseyard for its Maui Division of Forestry and Wildlife operations in Pulehunui. DOFAW is seeking to move from its current 3-acre baseyard in Kahului to a 20.3-acre plot in the Pulehunui area, according to a draft environmental assessment.

Michelle Chouteau McLean, deputy director of the county Planning Department, said Wednesday that there has not been much progress on building out the original master plan, which has not been revised to include a jail that state lawmakers have discussed.

A correctional facility in Pulehunui would face challenges including the high cost of water, sewer and transportation infrastructure and the “pretty harsh physical climate,” she said.

The visitor industry expressed concerns as well, pointing out that tourists would be driving between Kahului Airport and Wailea and be “going past the prison because there wasn’t going to be a whole lot of setback from the road,” McLean said.

Walin is handling sales for the Pulehunui Industrial Park and can be reached by phone at 244-2200 or by email bwalin@ccim.net. For more information, visit www.pulehunui.com.