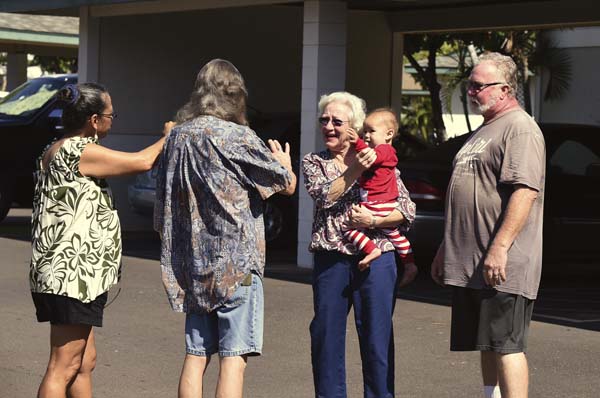 Front Street Apartments residents Leann Sherman (from left) and Gary Sherman wish happy travels to neighbors Sharon Serafico and her great-granddaughter Sage, as Serafico’s husband, Billy Kando, prepares to drive them to the airport for a trip to San Diego. Serafico, a former preschool teacher on Maui, said she has been living in the apartments for 12 years, but doubts she and her three-generation household will be able to stay when rents increase. “Right now, we pay close to $1,200 a month,” she said. “Once our grandfather clause is up in two years, our rent will be who knows what, $2,000 plus. We have a community of people here who takes care of each other. Everybody knows everybody.” Kando said. “It’s going to be too much to live here. I don’t know what we’re going to do.” The Maui News / MATTHEW THAYER photo

Renters in the Lahaina Front Street Apartments fear they’ll eventually be forced out of their affordable units, due to a loophole in the tax code that would allow the units to be bumped up to market rates by 2019.

The apartments, which opened in June 2001 as a 142-unit affordable rental project, are home to from 250 to 300 people, many of whom are low-income, residents said.

“The Front Street Apartments were originally set up to give back to the community,” tenant John Massa said. “What has changed in the past 15 years, I cannot fathom. But whatever has changed is a terrible tragedy and needs to be corrected.”

Projects that are developed as low-income housing, like the Front Street Apartments, are supposed to be affordable for 50 years. But there was “a loophole in IRS code that allows owners of affordable projects to get out of the affordable requirement,” said Carol Reimann, director of the county Department of Housing and Human Concerns.

This loophole allowed owners to put a project up for sale after 15 years, and if no one buys the property within a certain period, the units can be rented at market rates.

Reimann said the county only learned about the situation in June, shortly before the Aug. 4 deadline to purchase the property.

“By the time the county was notified, it was extremely late in the game,” Reimann said. “Had we more time, we might have been able to process viable options.”

The state was interested in buying the property, which was appraised at $8.7 million but was on the market for $15.4 million. But because by law the state cannot make a purchase above an appraised value, the plan fizzled.

Project owners Front Street Affordable Housing Partners don’t plan on kicking anyone out, Reimann said. As units become available, they will be rented at market rates. Rent for the current tenants can’t be raised for three years.

The final unit belongs to the manager.

Residents include families with children, seniors and people with disabilities, who would likely have to leave if rents went up, said Chi Pilialoha Guyer, vice president of the Committee for Residents at the Front Street Apartments.

“The common denominator amongst the people who live at Front Street Apartments is that we are all in the ‘lower economic’ category,” said Guyer, who moved in four years ago.

At 74, Guyer lives on a limited income and cannot work due to age and hip replacement surgery. A former social worker and real estate appraiser, Guyer retired from a job as docent at the Lahaina Restoration Foundation upon moving into the Front Street Apartments. Rent is $700 a month, but Guyer pays $195 with help from the U.S. Department of Housing and Urban Development.

Market rate rents are not an option for Guyer and many others. Among the lowest priced listings for the west side on Friday on Craigslist was a studio apartment in Honokowai for $1,595 a month.

“There is almost no place for us to move as there are very few ‘affordable’ rentals in Lahaina, so are we going to have to live on the streets?” Guyer asked. “That is the only alternative I can find for myself. . . . We are good tenants, take good care of the property and enjoy living here.”

Massa said that if rent goes up, “what we will probably see is a big increase in occupancy as tenants sublease their apartments to make rent.”

“Renting out floor space, couches, hide-a-beds, dividing rooms, and even bunk beds,” Massa said. “Doubling the septic waste and overloading the parking facility and infrastructure of Lahaina . . . I myself would like to avoid this situation by all cost, even if it means leaving my home, unfortunately.”

Multiple attempts to reach Bill Dornbush, the Hawaii representative for the project, were unsuccessful.

According to the project’s qualified contract listing, the land is owned by 3900 Corp., a branch of the Harry & Jeannette Weinberg Foundation.

Before putting the project on the market, owners had to prove they were “under financial duress,” Reimann said.

“It’s my understanding that the ground lease on the property was going to increase,” said Kent Miyasaki, spokesman for the Hawaii Housing Finance and Development Corp. “Normally, if it’s built on state land, we would have a 55-year or 75-year lease ensuring affordability. In this case it was not built on state land.”

Reimann said “the county is not happy with this situation,” and that the council, administration and state are working on other options, including the possibility of another low-income rental project in West Maui.

“We are very sympathetic for the renters and have been in touch with the lessee Front Street Affordable Housing Partners,” she said. “They indicated that it is not their intent to throw people out, and that they will work with the renters on a transition plan.”

Council Member Elle Cochran, who holds the West Maui residency seat, thought the administration didn’t address the issue soon enough and said that the situation was “avoidable.” She said that her office is looking into the option of eminent domain, in which the county can take over private property for public use.

“Any amount is well worth the investment because it’s so sorely needed,” Cochran said. “I’m happy to go the route of eminent domain or whatever route we can take in order to purchase it and keep it affordable in perpetuity.”

Cochran said the council could put conditions on projects in the future to make sure they always remain affordable.

“Everyone seems to feel that it’s impossible to do anything affordable in perpetuity,” she said. “It’s impossible in a developer’s eyes. But it’s being done across the nation. So why people say that here, I don’t know.”

Anna Barbeau, president of a committee representing tenants, said she moved into the apartments thinking it would be affordable for 50 years, “which suited my situation (and many others).” The owners’ decision to raise the project to market rates “came as a shock to me.”

“We tenants are united to do whatever it takes to remain here per the original 50-year term we were aware of,” Barbeau said. “We feel we were duped and are being used. All we ask is to remain, working and paying rent that is affordable.”