About a dozen from island traveled to the Capitol for ceremony 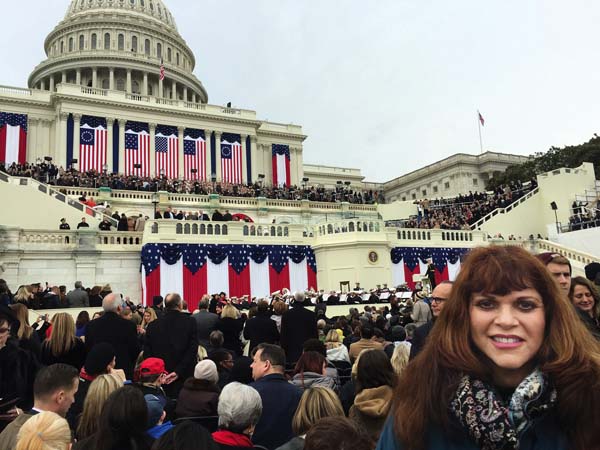 Kihei resident Cindy Sue Clark poses in front of the U.S. Capitol on Friday before the inauguration of Donald Trump. Clark was one of around 12 Maui residents known to be in attendance at the event. The temperature in Washington, D.C., on Friday was about 40 degrees. Photo via Cindy Sue Clark

Kihei resident Cindy Sue Clark said that the heavens dropped a blessing on new President Donald Trump along with her and hundreds of thousands of others gathered to watch the inauguration on the steps of the U.S. Capitol in Washington, D.C., on Friday.

Clark said that as soon as Trump began taking the oath of office, “big drops of rain hit us on the head.” As soon as the oath was delivered, the rain stopped.

“They say like (rain at) a wedding, it’s good luck,” Clark said Friday from her Washington hotel room after attending the inauguration.

The total number of people in attendance was not available Friday, but officials had expected 800,000 to 900,000 for the inauguration, according to CBS News. 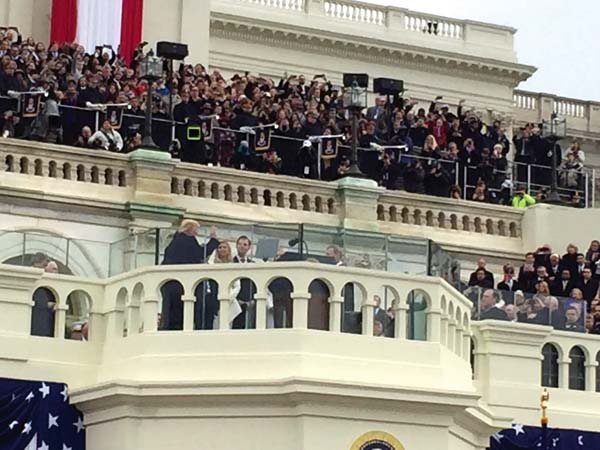 Kihei resident Cindy Sue Clark said she was very close to President Donald Trump as he took the oath of office Friday in Washington, D.C.. She said that her seats were in the area where spouses of congressional representatives also sat. Photo via Cindy Sue Clark

“It was great,” Clark said of the inauguration and its festivities, adding that she was excited to see most of the living former presidents. “I got to see (Barack) Obama and Michelle (Obama) up close. I got to see the Clintons up close.”

Clark had a seat not too far below the platform used for the oath of office. She said those seats were generally for spouses of congressional members. Clark served as a co-chairwoman for the Trump campaign on Maui.

For most of the swearing-in ceremony, things were positive and there were no disruptions, Clark said. The only time she heard the crowd roar was when Senate Minority Leader Charles Schumer, D-N.Y., stepped up to the podium. When she asked others what the commotion was about, they told her that people were booing Schumer.

Clark said that she “very much” liked Trump’s speech.

“He’s putting back the power in the hands of the people,” Clark said referring to one of the lines in Trump’s speech. “Man, he got the loudest cheer for that.”

She added that politicians often get wrapped up in their own “power and money thing” and “we’re just nothing to them.”

But, she said, Trump is looking to help people.

“He wants to help in the inner cities, no one really cared about the people that live there. He wants to make better schools, better education and jobs,” Clark said.

Also pleased with Trump’s speech was Wailea resident Jennifer Talbott, who was joined by her husband and 29-year-old son at the inauguration.

“It was awesome, wonderful,” she said of the experience.

Talbott said that Trump’s speech hit on every single point he focused on during the campaign.

But, “it was (with) so much passion, knowing now he is president,” she said.

Talbott was close enough to look over at Obama during Trump’s speech, and she said that he appeared “not so happy about the speech,” in which Trump alluded to nothing being done for the country for the last eight years.

“It was a very good speech,” Talbott said, noting Trump is “going to make our country great again.

“Everything is going to be better,” she said.

Because of all of the security, Talbott said she got to the Capitol area at 8 a.m. and then sat for three hours while waiting for the inauguration to begin.

Overall, she called the experience “unbelievable.”

“It’s a once-in-a-lifetime experience,” she said. “I would never be able to do it again. I’m just so happy I had the opportunity to come here and be part of this amazing movement,” said Talbott, who also was part of Trump’s campaign on Maui.

“I feel good to be in a town surrounded by people who are on the same page; that have the same support you do.”

Regarding Trump’s campaign rhetoric that was not kind to women and minorities, Clark, a former chairwoman of the Maui County Republican Party, said that it was misinterpreted.

She alluded to former President Bill Clinton’s affair with White House intern Monica Lewinsky and said that, after that, “you just shrug it off.”

As far as comments about Mexican immigrants, what Trump said wasn’t quite what he meant, Clark said. She said that his comments were against immigrants who come to the United States and commit crimes — including murder, rape and drugs.

Clark was pleased that many stars boycotted the inauguration, pointing to Hollywood’s big support of the Democratic Party.

“It brought back more respect for the traditions of what an inauguration should be.”