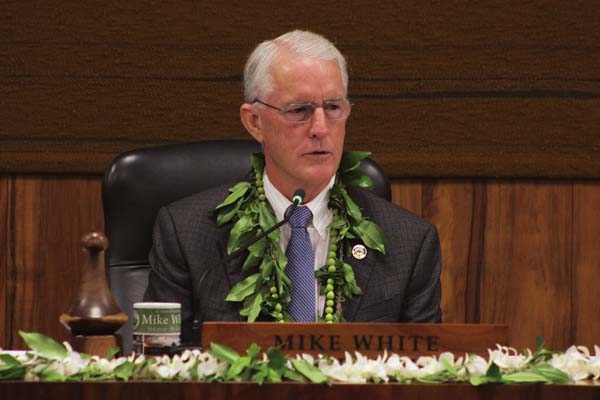 Mike White presides over the Maui County Council shortly after being re-elected as chairman Monday evening in Council Chambers. The meeting lasted from 2 p.m. Monday to around 3:30 a.m. Tuesday as council members listened to five hours of public testimony and worked to iron out leadership and staffing issues. The Maui News / COLLEEN UECHI photo

And a public hearing on committees is still to come.

When the dust settled just past 3:30 a.m. Tuesday, Council Member Mike White had returned as chairman, frustrating many residents who said he had violated ethics laws by announcing his claim to the position before members took a formal vote.

White won back his chairmanship in a 5-4 vote, after several 5-4 votes defeated nominations of other members. Council Member Bob Carroll was elected vice chairman, while Council Member Stacy Crivello was chosen as presiding officer pro tempore.

“I’ve never experienced a first council meeting this way ever,” Council Member Elle Cochran said. “I think it didn’t need to turn this way, if the past council chair (White) hadn’t done that press release. I think that triggered it all because it sent that message or that perception that some vote was called (beforehand).” 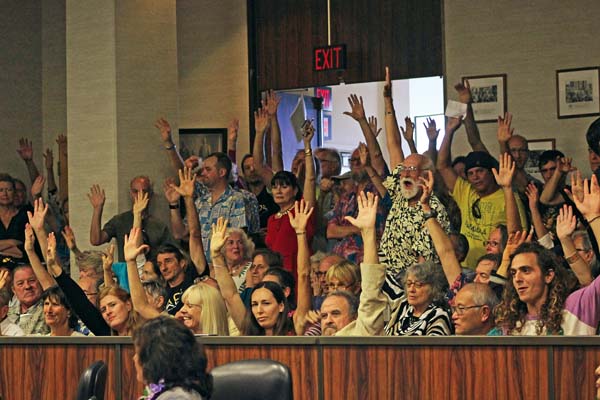 Residents in the gallery raise their hands in response to testifier Mark Sheehan’s question as to how many people in the audience “support change to the council.” The Maui News / COLLEEN UECHI photo

Council Members White, Carroll, Crivello, Riki Hokama and Yuki Lei Sugimura voted in favor of White, while Council Members Cochran, Don Guzman, Alika Atay and Kelly King voted against him, which was the way the votes were split almost all evening.

Opponents said that White stepped out of line by trying to secure votes early on and leaving out incoming members. But as White and others have said, organizing council leadership ahead of time follows current laws and is not much different from what past councils have done.

What started as a 275-word news release snowballed into widespread public outcry over backroom deals, transparency and the old way of doing business in Maui County politics.

On Nov. 11, White’s office sent out a news release, stating that he would continue as chairman. Carroll would serve as vice chairman and Hokama would retain his spot as chairman of the Budget and Finance Committee. 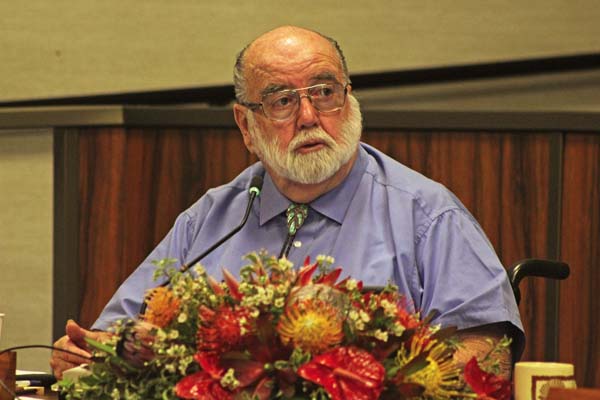 When complaints surfaced on social media and in letters to the editor, White responded that it was common for councils to start organizing before inauguration day.

“Much needs to be decided literally on Day One of the new council term,” White said in his Nov. 27 Chair’s 3 Minutes column in The Maui News. “Announcing leadership positions prior to a term is nothing new.”

“Ever since I’ve been on the council and even before that, as soon as the election was over the council started organizing,” he said. “After the inauguration you want to be able to get in there really quickly because there’s a lot to do. If you’re not organized early it’s really bad.”

But some saw it as rigging the system.

In December, resident Mark Sheehan, part of the SHAKA Movement that led the genetically modified organism moratorium initiative and SAFE, a group focused on protection of the land and natural resources, filed a complaint against White, saying that he had violated the County Charter. Sheehan is also trying to get White impeached. Last month, the Hawaii Alliance for Progressive Action also filed a complaint and asked for a ruling from the Office of Information Practices as to whether White had violated the state Sunshine Law.

But White’s actions fit within the current ruling from the Office of Information Practices, Maui County Corporation Counsel Pat Wong said during the meeting. According to an OIP opinion that has been in effect since 2002, “the obligations of the Sunshine Law are not imposed upon an elected council member until he or she begins the term of office.”

“OIP has made it clear on what is a violation and also perceived to be the spirit of the law and I and others have followed their advice to plan for the new term,” White said Tuesday. “If there are any subsequent opinions or changes to the law, I will follow their guidance.”

But Brian Black, executive director of the Civil Beat Law Center for the Public Interest in Honolulu, said that the claim that council members are not subject to the Sunshine Law until sworn in “reveals a massive loophole that the Maui County Council believes exists in the Sunshine Law.

“The consequence of the Maui counsel opinion — taken to its logical conclusion — is that the entire Maui County Council could sit in a closed room before inauguration day, deliberate and come to an agreement on how to vote on those issues once sworn in,” Black said.

King said she understands that these conversations happen, but said it is a problem if members were voting behind closed doors.

“I’m not going to speak to the legality of it because I’m not an attorney,” King said before the meeting. “But I’m not happy about it. And I’m not feeling comfortable with the proposed leadership because of this.”

Both residents and council members expressed the concern that the “minority” in the council — Atay, King, Cochran and Guzman — would not be equally included.

Cochran and Guzman said before the term began that White was already making decisions on his own.

The morning after election night, White began meeting with each council member in their respective offices, Guzman said. That morning, Guzman had “already committed” to White being the chairman, but less than eight hours later, he said he was removed as vice chairman.

The position “doesn’t matter to me, but what matters to me was the intent behind it,” Guzman said. “He was fearful of what was going to happen if he lost control.”

“I am an elected official with every other benefit and right to be part of the discussion table,” Guzman said. “For him to throw me out like that, it may seem personal but to me it affects the community as a whole because I believe that I do good work.”

But according to White, Guzman and Cochran were doing organizing of their own. Cochran approached Carroll and asked him to be the chairman, but Carroll declined. Carroll said he was “really bothered” by the negative tone of some of the ‘Ohana Coalition candidates, who were offered as true representatives of the people during the election.

“It was ‘get rid of the scrubs, we’re going to take over and do everything,’ ” Carroll said. “It just rubbed me wrong.”

Carroll said he saw nothing wrong with getting a head start in organizing, and added that when White has organized in the past, Cochran and Guzman participated.

But this time, Cochran said she felt she’d been left out of key discussions. She only found out the proposed committee lists when she read the agenda. Typically, committee chairpersons have a say over who is on their committees, rather than having it “dictated and written down on an agenda,” she said. In addition, some of the council committees were reduced from nine or seven members to five members, which White explained was to reduce members’ workloads.

“In the past, committee chairs were able to select their own members, but this has led to uneven makeups with heavier workloads for certain members,” White said. “As I have reiterated, it is a proposal and members are free to make adjustments, but as changes are made it becomes complicated to evenly distribute the workload among members.”

In response to testifiers’ concerns, members asked for a public hearing on the committees at a to-be-determined date.

The majority-minority line defined much of the leadership voting. Carroll, Cochran, Guzman, King and Crivello were all nominated for council chairman. Crivello declined, but the rest all failed to secure the position in 5-4 votes in which council members aligned along the same lines. King suggested compromises — a one-year chairmanship term for Guzman or a one-year chairmanship term for White, but both failed in 5-4 votes.

Retried college professor Dick Mayer, who stayed until almost midnight during Monday’s meeting, agreed that it’s natural for a winning group of members to have control in a governing body.

“One of the differences is that Maui County is nonpartisan,” Mayer said. “We made a conscious decision to get rid of Republicans and Democrats and changed the charter so that all candidates run nonpartisan. So theoretically, they should not be joining up in parties and groups that way, but the reality is that they do.”

Carroll, however, said councils go through “growing pains” every term and in the end, members will vote for a proposal if it has merit.

“When all the dust settles and we finish with the little arguments  . . . every time I’ve seen it, everybody votes whatever they feel is right,” said Carroll, who is serving his eighth term, though not consecutively. “It’s no more ‘I’m with this group or that group.’ Everybody votes for the issues and concerns.”

Monday’s meeting flared many tensions, between residents who debated White’s leadership, between council members who thought there was a lack of fairness, between elected officials and private citizens. Outbursts from the gallery, clapping and boos punctuated public testimony.

At one point, even Mayor Alan Arakawa — who was presiding over the meeting until a chairperson was elected — let out an expletive, calling a Cochran statement “bull s***.”

In the eyes of some residents, government has a reputation to repair.

“We were all hoping that these new faces and other things changing would be a positive step that everyone would benefit from,” Kihei resident Deborah Creagh said. “We could kind of have a reset, a start over. That didn’t happen today.

White said council members have got to concentrate on the many issues coming this term, from housing to water to community plans.

“It is time to put personalities aside and focus on issues that are clearly impacting our community,” White said. “This must be our focus. I believe we have more that we agree upon than we disagree on, and I hope we can move forward with respect and professionalism.”

Guzman saw a silver lining — in the amount of community participation and the shift toward more transparency in council matters. What’s happening on Maui County is “unprecedented” in Hawaii, he said.

“This could be a change in the entire structure of how we do business or how we organize throughout the whole state,” Guzman said. “So there’s a lot of counties that are watching this right now.  . . . It may have started off with a lot of turmoil but in the end this is going to be something revolutionary where it’s going to change the way that councils do business.”

• Rules of the council, with slight housekeeping amendments.

• Council Services staff for the next term.

• Crivello as representative to the Hawaii State Association of Counties and Hokama as alternate.

• Sugimura as representative to the Kula Agricultural Park Committee (this county committee requires that one of its members come from the council).

Several measures that would normally be taken up in committees were deferred pending a public hearing on the committees.