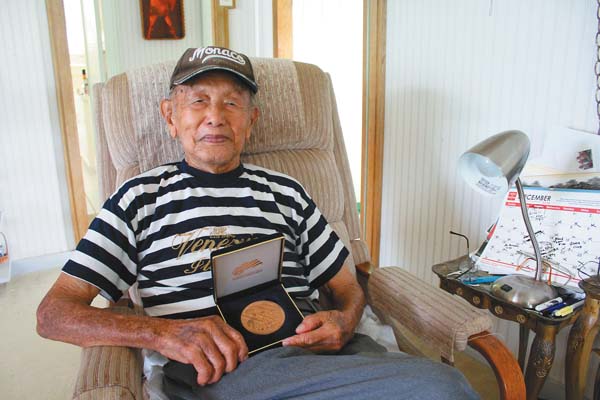 Military Intelligence Service veteran Tom Yamada poses with the Congressional Gold Medal, awarded to Japanese-American veterans in 2011, in his Wailuku home. “MIS: America’s Secret Weapon,” is on display at the Nisei Veterans Memorial Center until the end of January. The Maui News / COLLEEN UECHI photo

In 1940s America, a connection to Japan was a double-edged sword.

Kahului-born nisei Tom Yamada, 102, knew this all too well. While the American military valued his fluency in Japanese for interrogating prisoners of war, a wary American government took his Japan-born father from his job at Kahului Store and interned him in Haiku.

“Here I am in the Army and my dad is in military confinement,” Yamada said. “I guess you can’t help that, you know?”

During World War II, while their families were regarded with suspicion, young Japanese-Americans became invaluable as part of the Military Intelligence Service, using their knowledge of language and culture to thwart attacks and save lives throughout the war.

Because the work of MIS specialists was top secret and often undocumented, their accomplishments slipped under the radar for many years. 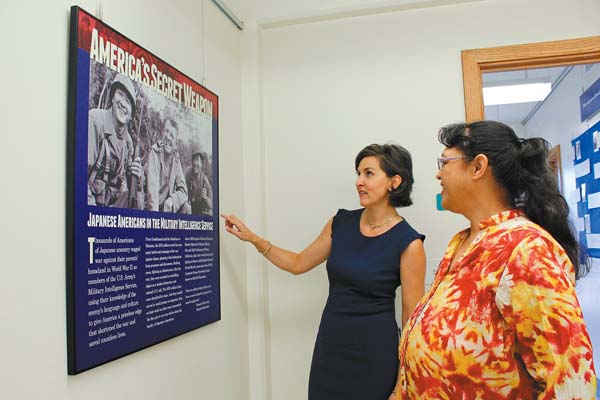 Now, the stories of Yamada and other MIS veterans are part of an exhibit that runs till the end of this month at the Nisei Veterans Memorial Center in Kahului.

“I think they just made Hawaii a better place and gave the Japanese a better chance of succeeding here in Hawaii,” volunteer curator Kyle Watanabe said. “I always tell people, just imagine if they didn’t do what they did, what it would be like for our generation, the sansei. That’s why telling the story of the MIS is important. They served their country when they were always being questioned.”

Glenn Goya, a member of the center’s board of directors, first saw the exhibit at Fort DeRussy on Oahu and wanted to see it brought to Maui, Watanabe said. On display since November, the NVMC exhibit is a reproduction of the larger panels at Fort DeRussy that was created by the MIS Veterans Club of Hawaii. Watanabe said MIS’ story is “not really known by many people,” but that interest has been growing in recent years.

“I think a lot of it stemmed from the Congressional Gold Medal (awarded in 2011), because the MIS finally got recognized,” office manager and curator Melanie Agrabante said. “So that’s when people started going, ‘Wait, we know the 100th, we know 442nd. What is this MIS?'”

The Military Intelligence Service was one of four highly respected Japanese-American units that served in World War II; the other three being the 100th Infantry Battalion, the 442nd Regimental Combat Team and the 1399th Engineer Construction Battalion.

When war came to the islands, fear and suspicion of Japanese-Americans immediately set in. Families across the U.S. and Hawaii were shuttled to internment camps. Young Japanese-Americans were dismissed from the Hawaii Territorial Guard. But 169 of these “forsaken nisei” still found a way to serve, organizing into a labor battalion known as the Varsity Victory Volunteers until they could join units like the 442nd and MIS, according to the exhibit.

Some soldiers were sent to study at a Japanese language school that opened in San Francisco before the war but relocated to Camp Savage in Minnesota in 1942.

Yamada was drafted in 1941 and went to Camp Savage after basic training to study Japanese language and military terminology. Yamada, whose parents were from the Kumamoto prefecture, had studied in Japan as a boy and attended Doshisha College after graduating from Maui High School in 1933.

“It was a no-nonsense school,” Yamada said of Camp Savage. “It’s a good thing I went to school (in Japan) and picked up the Japanese language. That really helped me out.”

The need for linguists was so pressing that anyone with the slightest hint of knowledge was recruited for interpreting. Hana-born Masao Motooka, 91, said that he attended Japanese school as a boy, but barely knew the meaning of “moshi moshi” (the Japanese term for hello in telephone conversations) when he landed interpreting duties with MIS. He was drafted in early 1945 and stationed in Saipan, where his job was to interrogate prisoners in stockades for their names, rank and serial numbers.

It’s also how Hilo-born, Maui-raised veteran Harold Okumura, 93, ended up in the MIS.

“They interviewed us, and they found out I went to Japanese school,” Okumura said. “They wanted some interpreters. I wasn’t that good in Japanese, but at least I can understand and talk a little bit.”

In early 1945, Okumura was sent to Okinawa, where a campaign that was supposed to last three weeks instead dragged out for three months as Japanese soldiers eluded heavy bombing in deep caves dug into the hills of southern Okinawa. Okumura’s job was to coax soldiers and civilian hostages from these caves.

“We told them, ‘I’m from Hawaii, I’m nisei, so don’t worry. We get food, we get medicine, so come out,'” Okumura recalled. “But sometimes they don’t come out because get Japanese soldiers. They hold them back.”

If no one emerged, troops would seal the cave or toss flamethrowers inside. Sometimes civilians tried to escape at night, but were often shot by troops who thought they were Japanese soldiers. In Okinawa, civilians suffered the most, Okumura said.

In time, Okumura picked up the local dialect, which came in handy when trying to find Japanese soldiers disguised as civilians. Villagers, who often underwent horrible torture at the hands of the Japanese, were more than happy to point them out.

Deployed all over the Pacific theater, MIS specialists became “America’s secret weapon.” They spent hours listening to Japanese radio communications, interrogating prisoners and scanning documents and diaries for clues on future attacks and the location of ammunition reserves. Their intelligence helped Allied forces prepare for and thwart many attacks. Often upon being captured, soldiers readily gave up information.

“Once they’re captured, they feel their life is at an end already because they’ll be executed or killed,” Yamada said.

While serving around the Pacific, including Australia and the Philippines, Yamada often came face to face with prisoners of war. Perhaps his most famous encounter with the enemy was when he served as interpreter for Gen. Hideki Tojo after Tojo attempted suicide. The former prime minister and head of the Imperial Japanese Army was suffering too much to talk, Yamada recalled.

“He was in no condition to keep up conversation,” Yamada said. “My purpose there was just almost to comfort him.  . . . The more you think about it, gee boy, you just wonder how it was possible that I was in a situation like that? To meet the number one military man in Japan.”

After the bombing of Hiroshima and Nagasaki in August 1945, and Japan’s surrender in September 1945, MIS specialists like Yamada served as a bridge between Allied forces and the Japanese people. Their roles ranged from bringing food to starving Japanese to helping with war crime investigations.

Motooka, who was stationed in a hotel near the Tokyo train station, said Japan was “all buss up.”

Once on his way to visit grandparents, Motooka passed through Hiroshima.

“On two sides of the track, it was all flat, with only that one bomb,” Motooka said.

The Maui veterans said, in general, their fellow soldiers did not treat them any differently for being Japanese. But extra precautions were taken to make sure that the Japanese-Americans were not mistaken for the enemy.

“They always assigned us one sergeant or lieutenant . . . any place we would go, because they might shoot us (by mistake),” Okumura remembered.

NVMC Director Deidre Tegarden, said that Hawaii, as the “anchor of the Pacific,” has a responsibility to preserve and share the stories of its veterans.

More stories of Maui veterans and the MIS are on display as part of “MIS: America’s Secret Weapon,” open to the public from noon to 4 p.m. Monday through Saturday through Jan. 31. The center is located on Go For Broke Place off Kahului Beach Road. For more information, visit nvmc.org.