Structural deficiencies found, but not original contractor that went out of business; Legislature tapped to provide funds to repair facility that houses popular programs 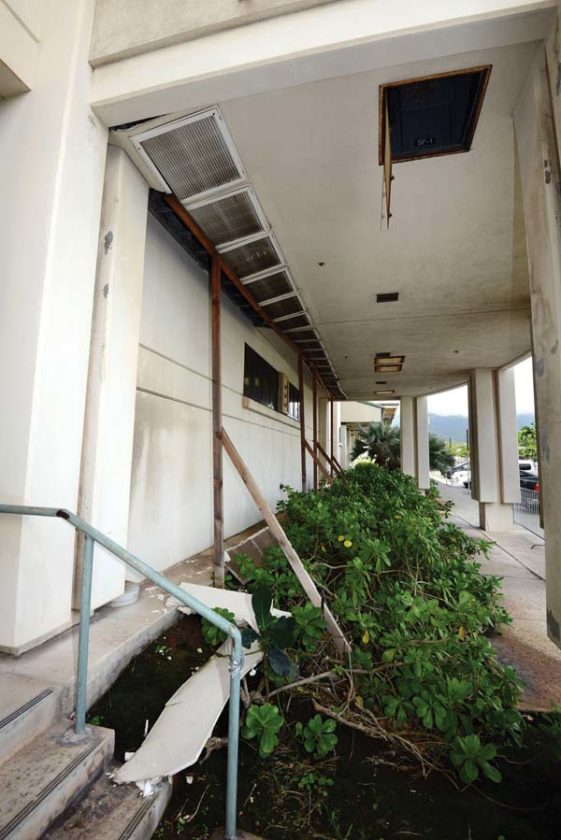 Due to design and construction problems, the soffits (first photo) have begun to fall from the UH-Maui College’s Pa‘ina building in this photo taken Tuesday. The building houses the culinary program, student dining and Class Act restaurant and is safe, according to college officials. However, scaffolding holds up portions of the building’s exterior ceiling. The Maui News / MATTHEW THAYER photo

The Pa’ina building, one of University of Hawaii Maui College’s most used facilities, suffers from construction and design deficiencies and is in need of major repairs, officials said.

Chancellor Lui Hokoana said the building that houses its culinary program, student dining and Class Act restaurant, is safe, but people are restricted from walking under the eaves in certain areas because the soffits, or undersides, have begun to fall.

UH-Maui College officials said they have alerted Maui State Rep. Justin Woodson, whose district includes the Kahului campus. He is also the House chairman of the Higher Education Committee, which reviews the University of Hawaii’s budget.

The state Legislature will begin its 2017 session today.

Woodson said last week it’s currently hard to see what type of funding request could be made, as costs of the repairs have not yet been determined. But Woodson said he would like the college to obtain all of its funding at once to move the repairs along quicker. 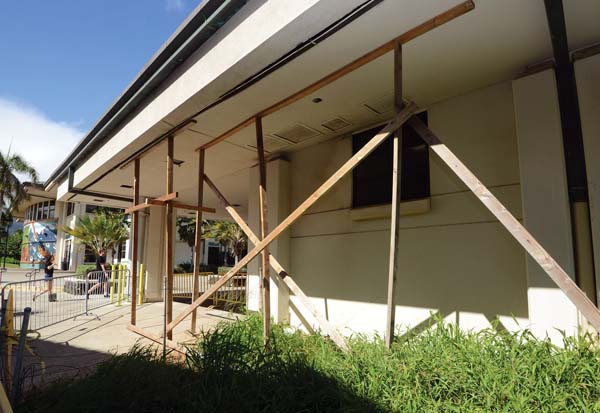 Hokoana said that the soffits on the upstairs of the Pa’ina building began to fall off around two years ago. The college had a contractor look at the problem, but the contractor found other construction and design deficiencies, such as large metal beams that were not correctly fastened to the building.

David Tamanaha, vice chancellor of administrative affairs, said the first round of repair work was done to the second floor around a year ago. It was done by F&H Construction for around $162,000, according to online records.

Hokoana said that the university was considering suing the original contractor, Dick Pacific, but it went out of business and its assets were sold to another company in 2009. Hokoana said that a contractor will need to be hired to do an estimate for the repairs.

The Pa’ina building was built more than 15 years ago. According to its environmental assessment, the building’s ground floor is around 24,750 square feet and includes a classroom, a bakery, prep kitchen, cafeteria/dining area, restrooms, showers, offices and a raised seating/demonstration area.

Its second floor consists of 13,450 square feet and includes classrooms, a private dining room, a beverage lab, a fine dining area and an exhibition kitchen.