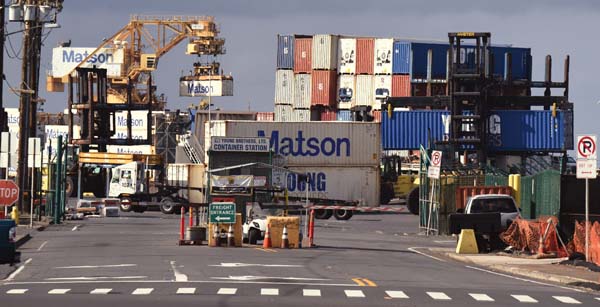 A Young Brothers crew loads an interisland barge Friday afternoon in the foreground at Kahului Harbor while Matson containers are hoisted into place on another vessel on the other side of the harbor. Compared with 2015, there was only a slight 0.1 percent rate of growth for interisland shipping statewide in 2016, Young Brothers reported. Kahului Harbor is the largest Neighbor Island port by volume, and it saw a 1.5 percent drop in volume for the year. The Maui News / MATTHEW THAYER photo

Even though the state Department of Business, Economic Development and Tourism announced this month that Hawaii’s economy continues to expand, albeit at a slightly reduced rate, a Young Brothers report shows interisland cargo shipments between Honolulu and six Neighbor Island ports “essentially flat” at 0.1 percent growth in 2016.

The fourth quarter of last year was down 0.6 percent, compared with the same period in 2015, says the report released this week.

“For the year, most ports were lower or flat against the previous year, reflecting a general lack of economic growth drivers,” said Young Brothers Vice President Roy Catalani.

Most ports saw a “relatively strong” increase in agricultural shipments in the last three months of 2016, but overall they were down 4 percent for the year.

All Maui County ports recorded reduced overall cargo volumes, Young Brothers said. Volume at Kahului Harbor was down 1.5 percent in 2016, compared with a year earlier; Molokai dropped by 3.8 percent; and Lanai was off by 8.3 percent.

In the fourth quarter, Kahului – the largest Neighbor Island port by volume – was off 2 percent; Molokai was down 5.4 percent; and Lanai fell 20.7 percent.

Interisland shipping on Lanai was down significantly because, in part, large hotel and resort renovation projects were completed last year, Young Brothers said.

Construction projects on the Big Island and Kauai spurred higher volumes at the ports of Hilo and Nawiliwili, the shipper said. But construction-related shipments statewide were down last year and in the fourth quarter.

Food shipments were stronger statewide, especially for Hilo; and the state’s waste and recycling sector rebounded at the end of the year, although it remained down for the year overall because of a prolonged weakness in recyclable materials prices earlier in the year.

Agricultural exports for 2016 were down at all interisland ports except on Maui, where cargo volumes increased 9.8 percent. Molokai was down 0.6 percent in ag shipments. They dropped 1.5 percent on Oahu, 8.7 percent in Hilo, 10.1 percent in Kawaihae and 4.7 percent on Kauai.

In the fourth quarter, agricultural volumes on Oahu increased 13 percent while Maui grew 12.6 percent; Hilo rose 9.2 percent; and Kauai was up 5.1 percent. Decreases were seen at Kawaihae, 16.7 percent; and Molokai, 4.3 percent.

Cargo volume is measured in terms of container/platform equivalents, also known by the acronym CPEs.

Hawaii’s nominal personal income (not adjusted for inflation) was projected to grow about 4.7 to 4.8 percent in the next few years, according to the DBEDT’s Feb. 8 report. Last year, the state had 14,000 new payroll jobs created, and almost every employment sector saw increases except state government and wholesale trade.

Hawaii’s unemployment was the fourth lowest in the nation in 2016. The department forecast a stable economy through this year.