House bill would phase out counties’ share of hotel tax

A bill that could force Hawaii’s four counties to raise property taxes was passed Tuesday by the House Tourism Committee.

House Bill 1586 would phase out the counties’ share of transient accommodations tax revenue, also known as the hotel room tax, over a three-year period. The amount received by the counties would drop from the current $103 million to $93 million in fiscal 2017-18, $62 million for fiscal 2018-19, $31 million for fiscal 2019-20 and zero thereafter. The bill also implements new income tax brackets over the same period.

Yamashita said the measure was aimed at protecting island residents.

“Our residents, especially low- and middle-income taxpayers, are paying too much income tax,” he said. “At the same time, nonresidents can buy homes in Hawaii, with the nation’s lowest property tax rates, and yet in most cases, they pay no income tax to the state. This has the effect of keeping the cost of buying a home out of the reach of many of Hawaii’s people and causing property valuation to continuously rise.”

There was immediate strong opposition to the bill.

While the bill argues that current property tax structure “caters to nonresidents and burdens local residents, particularly the senior population” and raises the cost of living for residents, the measure “deals with this by killing the allocation of the TAT to the counties, which would force all counties to raise their property taxes,” the Tax Foundation of Hawaii said in written testimony.

White said the transient accommodations tax was established to help the counties fund visitor-related expenses based on a percentage of earned revenue. Reducing the counties’ share contradicts the conceptual basis for the tax, he said.

“Sound fiscal practices favor a policy that increases the distribution of TAT revenue to the counties at the same rate that revenues grow — not a decrease in the distribution,” White said.

Over an eight-year period, the counties have incurred $170 million in cost increases in fire, police, roads and park services, he said. County spending for visitor-related services has outpaced the current distribution of the hotel room tax, he added.

White said that if TAT revenue is decreased, “the counties will be forced to raise property taxes and will place the burden of paying for visitor-related services on our local residents.

“This is unfair, especially to those who may rent their home,” he said. “They will be left to pay more in their rent due to the trickle-down effect and will likely compound Hawaii’s affordable housing and homeless crises.”

Hokama said that, for years, the counties have fought for a fair share of the TAT to cover increasing operational costs of visitor-related expenses.

“This year, the counties are faced with even more fiscal challenges as negotiations for all 14 collective-bargaining contracts have begun, which may include salary increases and additional fringe benefits for thousands of employees for all of the counties,” he said.

Kim said: “Decimating the budgets of the counties in order to reduce the state tax burden would not be beneficial; it would simply force the counties to drastically reduce services or increase other taxes for our shared constituents.”

“We cannot continue to make Band-Aid changes to our tax system and think anything will really change,” he said. “This bill is the first step in making taxes more equitable for residents, and, if the counties follow suit, will make investors buying homes in Hawaii pay their fair share.”

The Nuestro Futuro Foundation donated $150,000 to the Maui Food Bank to help those impacted by the COVID-19 ...

An outage that knocked out power to 18,000 customers in pockets across the island for about an hour Tuesday was ...

Visitor chooses to return to California

The Maui News WAILUKU — A man arrested for violating the 14-day travel quarantine agreed to be flown back to ...

WAILUKU — Citing factors including a delay in bringing the case to trial, a judge granted a defense request to ...

UH-MC commencement is moved to Saturday

The University of Hawaii-Maui College commencement ceremony has been moved to Saturday and will include a ... 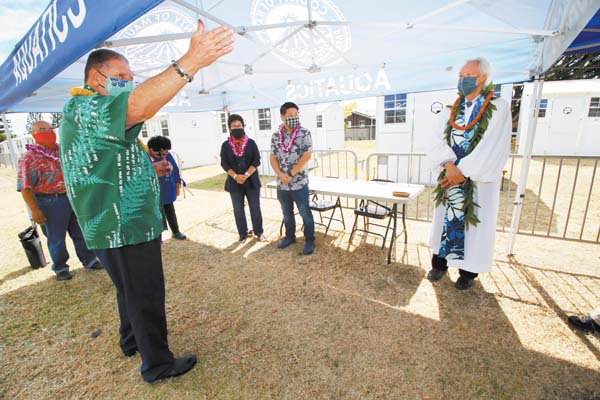