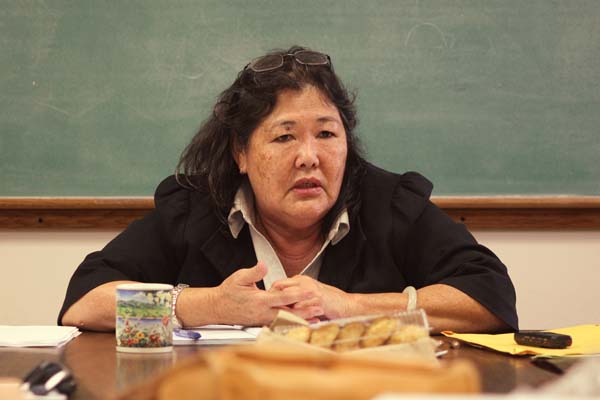 Jeri Kahana of the state Department of Agriculture talks about coffee quality standards with Maui farmers during a public hearing Wednesday at the department’s Maui District office. After the coffee borer beetle came to Hawaii, the department temporarily lowered standards to help struggling farmers. Now, some Hawaii farmers want to extend those standards until 2020. The Maui News / COLLEEN UECHI photos

Coffee grading standards were lowered after the arrival of the borer but were supposed to return to original levels this year. However, a proposed change to department rules would allow the lower standards to continue until June 30, 2020.

“Once the public perception of our high standards is lost, it will take years to rebuild,” Maui Coffee Association President Sydney Smith said at a public hearing Wednesday. “I don’t think that the way to deal with having lower quality coffee is to lower the standards. I think you just help farmers get the quality up.”

The coffee berry borer is found in just about every coffee-growing region around the world and is “one of the most devastating coffee pests,” according to the department website. The beetle bores into cherries to lay eggs. The larvae then feed on the bean, reducing both yield and quality.

The first detected case in the state was in Kona in 2010. It’s since spread to other parts of the Big Island and Oahu, and in December the beetle was found on a Kipahulu coffee farm. 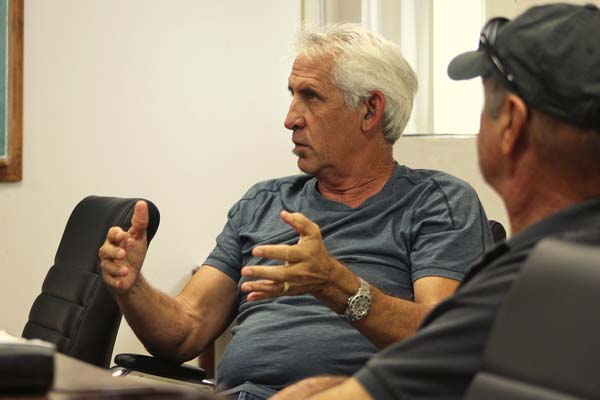 After the beetle arrived on the Big Island, more defects were allowed to help struggling farmers stay afloat. Beans with not more than two pinholes from insect damage could be accepted. And up to 20 percent defective beans, as measured by weight, were allowed for Hawaii Prime, Hawaii Natural Prime and Hawaii Mixed Natural Prime coffee.

That was supposed to end June 30. However, representatives of the Hawaii coffee industry want to extend the date by three years, “with the caveat that we’re not going to have more extensions after that,” said Jeri Kahana, administrator for the department’s Quality Assurance Division.

“This is just buying time right now, for us to be able to overhaul the whole grade standards and the certification process,” Kahana said.

It would also provide time for a market study on new standards.

“There’s too many standards, I think,” Kahana said. “We’re trying to narrow it down.”

Rob Lind of Olinda Organic Farm opposed the extension. He asked Kahana whether she’d ever tasted the 20 percent defective coffee.

“It tastes crappy, because it’s full of bug s—,” Lind said. “A lot of these factories over here, they’ll take this buggy coffee and then they’ll roast it dark and then they’ll grind it up so nobody’s the wiser. And then they’ll sell this at premium rates. And it brings the whole industry down when somebody tastes this for the first time. They’ll never drink it again.”

Despite the extra costs, Smith said she thought the Maui Coffee Association would support mandatory certification as a way “to get back our quality . . . before it’s too late.”

“I think it would strengthen the market,” added James “Kimo” Falconer, owner of MauiGrown Coffee. “We learned how to live with it (in the past). It was very important. When we lost it, it was a mess. It still is a mess.”

Now that the coffee berry borer has come to Maui, farmers have been taking extra precautions. Falconer, whose 500-acre coffee farm is the largest on the island, said he cut down all of the trees that bordered the road, because he knows tourists driving to and from Hana might swing by his Kaanapali farm. Smith said she’s started using a garlic concentrate spray on her 20-acre property.

Some Kona farmers have been using it successfully to protect their crops, and it’s another option for those who don’t want to use the organic insecticide primarily used to fight the beetle. Smith said the garlic spray, a 100-to-1 water-to-garlic ratio, doesn’t affect her coffee flavor and is a deterrent to both the beetle and mosquitoes.

“My farm smells like an Italian restaurant for 15 minutes and then it’s over,” Smith said. “Even though we can’t smell it, (the bugs) can smell it.”

For now, Maui coffee doesn’t need to be quarantined or fumigated before being shipped out, and Kahana said she hopes it stays that way.

“If they can control it because they caught it early, maybe they may not need to,” she said. “But if it starts spreading, they may have to implement an islandwide quarantine. Luckily, Maui is big enough that most of the farmers are in a different location. So that helps.”

Kahana encouraged farmers to stay diligent and maintain their farms. The department also reminds people not to pick coffee berries from trees or from the ground, and to inspect and clean footwear before leaving farms.

After three more public hearings — two on the Big Island and one on Kauai — the Board of Agriculture will make a decision, Kahana said.

For more information, visit hdoa.hawaii.gov/meetings-reports/proposedar/. Written testimony may be sent via email to hdoa.qad@hawaii.gov or mailed to the Quality Assurance Division c/o Department of Agriculture, 1428 S. King St., Honolulu 96814.