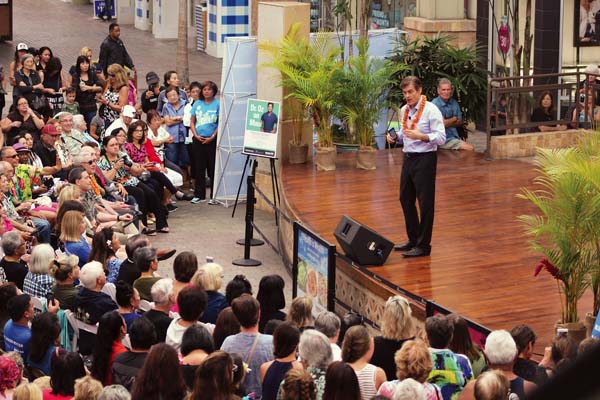 Celebrity surgeon and TV show host Dr. Mehmet Oz addresses a crowd of more than 500, including many fans who were thrilled to meet the doctor. Oz was a guest on “The Oprah Winfrey Show” for many years before launching his own TV show. The Maui News / COLLEEN UECHI photo

KAHULUI — With its abundance of sun, natural beauty and tropical foods, Hawaii could become the first Blue Zone state in the country, celebrity doctor and TV show host Dr. Mehmet Oz said Monday during a visit to Maui.

More than 500 people came to the Queen Ka’ahumanu Center to see Oz, who rose to fame on “The Oprah Winfrey Show” and now stars on his own “The Dr. Oz Show.” Oz spoke about the traits of healthy communities and touched on topics ranging from caffeine to weight loss.

“Everyone deserves a chance to be healthy,” Oz told the crowd. “Seventy percent of how you age is your lifestyle. It’s not your genes.”

The 56-year-old cardiothoracic surgeon is a professor of surgery at Columbia University in New York City and performs 100 heart operations annually, according to his website. He’s authored six New York Times best-sellers, mainly on health, and has won six Daytime Emmy Awards for his talk show.

Oz said he came to Oahu and Maui to film a show on healthy living and to promote a personal health app called Sharecare. 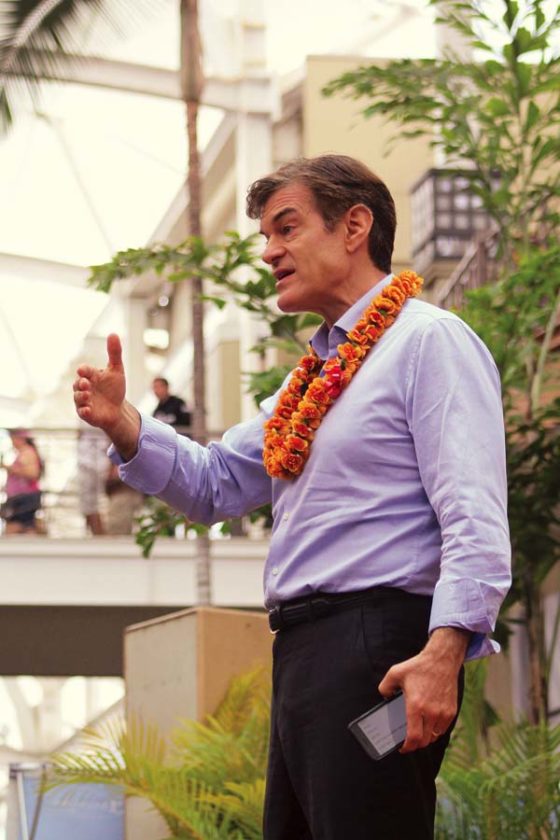 Recently, Hawaii was ranked No. 1 in the Gallup-Healthways Well-Being Index for a record sixth time. The poll was based on 177,000 interviews with adults across all 50 states that measured five elements of well-being: purpose, social, financial, community and physical.

“It means Hawaii is ahead of everyone else, but it also puts an obligation on people who live in Hawaii,” Oz said before Monday’s event. “Because if you can actually show us how to do it better, then the rest of the country can follow the lead.”

Maui, in particular, is in a good position to get healthy. In January, Central Maui was selected as a Blue Zone demonstration site, joining three other locations across the state that are working to emulate the world’s healthiest communities.

The five original Blue Zones — Ikaria, Greece; Loma Linda, Calif.; Sardinia, Italy; Okinawa, Japan; and Nicoya, Costa Rica — have been noted for the longevity and well-being of their residents. Now, demonstration sites like Central Maui are trying to foster the same habits of physical, social and mental health that each of these Blue Zones share.

In a place like Maui, there are many chances to live well, Oz said. Multi-generational families spend time together. The weather is good for outdoor activities year-round. 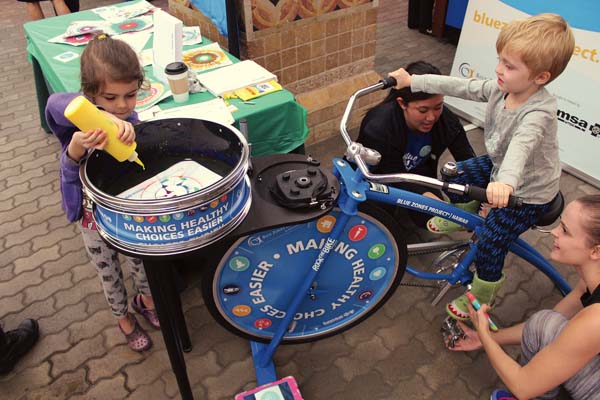 “Maui also has a lot of healthy food, and there’s a culture of people who understand what healthy foods are,” Oz said. “You don’t have food deserts on Maui like you do in some parts of the country.”

And, Maui’s natural beauty plays into one of the “Power 9” Blue Zone traits: having a sense of purpose.

“Getting up in the morning and knowing that you want to do something really cool,” Oz said. “In Maui, that’s easy. You just get up and go outside.”

During Monday’s appearance, Oz also answered questions from emails and the crowd. He recommended green tea over coffee; discussed a healthy balance of food, water, sleep and sex; and encouraged people to cut sugar and all “white foods” out of their diets: white flour, white rice, white pasta.

Larry and Judie Wong of Wailuku walked away from the event with big smiles on their faces.

“We watch him all the time,” Judie Wong said. “He provides a lot of useful advice.”

“It was the chance of a lifetime,” Judie Wong said.

Alisa Mendez, a junior at Kamehameha Schools Maui, said it was “nice meeting someone that everyone knows.”

“I think it’s amazing how he came here to figure out what’s the cause of (Hawaii’s good health) so he can help other places,” she said.

Oz hasn’t been without his share of controversy. The TV personality has come under fire from other doctors and medical publications that say his advice is unscientific.

“When you disrupt the status quo, people get uncomfortable,” Oz said. “If no one was upset, I wouldn’t be doing anything.”

While on Maui, Oz’s itinerary has included yoga on the beach and a visit to the Maui Tropical Plantation. The surgeon said that he’s been to Maui before and loves “the tranquility.”

Ashley Takitani Leahey, president of the Wailuku Community Association, said she had “pages and pages of volunteers” eager to help with the Blue Zones project after Monday’s event. The project will officially launch in Central Maui this summer. Organizers are hiring four full-time employees who will visit schools, create community programs and help businesses, including grocery stores, encourage healthier shopping. Funding will come from the Hawaii Medical Service Association, which sponsors the Blue Zones project in Hawaii, Takitani Leahey said.

“Maui couldn’t have become a Blue Zone at a better time,” she said. “We have the support we need, and we’re ready to take the healthiness and well-being of Central Maui to the next level. The fact that Dr. Oz came, I think, just totally boosted the Blue Zones project.”

Celebrity surgeon and TV show host Dr. Mehmet Oz addresses a crowd of more than 500, including many fans who were thrilled to meet the doctor. Oz was a guest on “The Oprah Winfrey Show” for many years before launching his own TV show. The Maui News / COLLEEN UECHI photo

Robyn Ah Mow-Santos kisses her son, Jordan, who holds up his mother’s Olympic silver medal after the U.S. women’s volleyball team lost to Brazil in the gold-medal match at the 2008 Beijing Games. Ah Mow-Santos also played on the U.S. Olympic teams in 2000 and 2004. AP file photo

Convicted murderer Steven Capobianco appears in 2nd Circuit Court last week. Capobianco, 27, was found to have contraband in his possession at Maui Community Correctional Center on Sunday night, according to the state Department of Public Safety. The incident is being investigated by the Maui Police Department. In December, a jury found Capobianco guilty in the 2014 death of his pregnant ex-girlfriend and the arson of her vehicle. His request for a new trial has been delayed until March 6. The Maui News / MATTHEW THAYER photo