Something in the wind 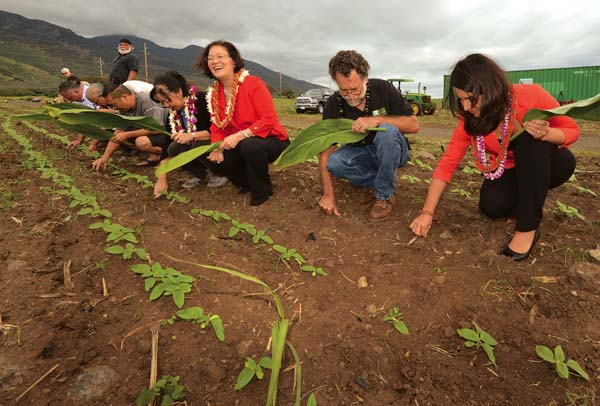 WAIKAPU — On a windswept former sugar cane field near the intersection of Honoapiilani and Kuihelani highways, 115 acres of sunflower seedlings peek through the soil in row upon row.

It’s a hostile environment, but one that nurtures what Pacific Biodiesel Technologies is looking for – sunflower seeds rich in oil content.

“They do well in wind,” said Kelly King, vice president of Pacific Biodiesel and also a Maui County Council member.

She explained that the company’s research on sunflower plants showed that they produce more oil through a combination of a windy environment and a practice of starving them of water in their last 30 days of growth.

In around 100 days, the plants inland of Maalaea will mature and yield 100 gallons of oil per acre, or 11,500 gallons for the first crop, followed by two other similar harvests in a year, for a total of about 34,500 gallons of sunflower oil, according to the company. 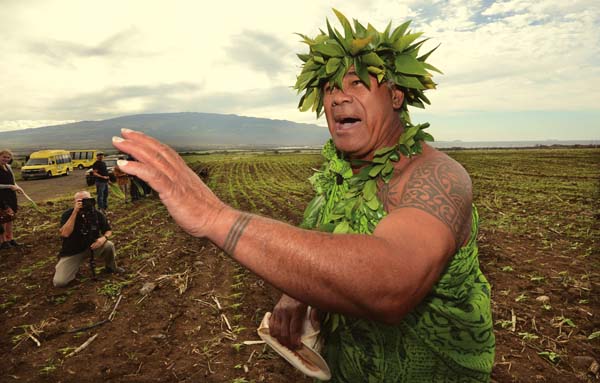 That’s enough to produce 32,775 gallons of biodiesel, which can fuel 109 passenger vehicles or four trucks and buses a year. Because biodiesel burns cleaner than petroleum diesel, the biofuel prevents 295 tons of harmful carbon dioxide emissions from entering the atmosphere, the company said in a project fact sheet.

The first harvest of sunflowers is set for June.

The farm will not use irrigation, relying instead on rain, and it will not use manufactured fertilizer, said Pacific Biodiesel President Bob King. Instead, it will rely on natural fertilizer obtained from partner Maui EKO Systems. 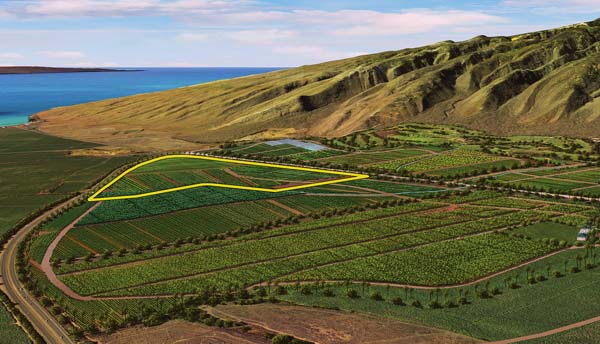 An artist’s rendering shows the location of Pacific Biodiesel’s first sunflower farm on Maui — 115 acres at the juncture of Kuihelani and Honoapiilani highways. Artist rendering provided by Waiale 905 Partners LLC

“We’re going to farm as naturally as we can,” he told a few dozen invited guests in a gathering at the Maui Tropical Plantation in Waikapu.

King founded the company with wife, Kelly, in 1995 in response to environmental and health concerns about used cooking oil dumped at the Central Maui Landfill. The company built the country’s first commercially viable biodiesel plant, and now it employs 80 people statewide and is the only commercial biofuel producer in Hawaii. Its state-of-the-art distillation facility on the Big Island produces as much as 5.5 million gallons annually.

The company began research on turning oil-rich plants into biofuel in 2010 and studied several crops grown on Oahu and the Big Island.

According to the fact sheet, the company successfully demonstrated the feasibility of growing a variety of biofuel crops on Oahu on 1-acre plots. Then, on the Big Island, additional crops were planted and studied, showing a yield of “100 days from soil to oil.”

Kelly King said the company tested eight to 10 different varieties of sunflowers, and it is pursuing two of the most promising types on Maui. 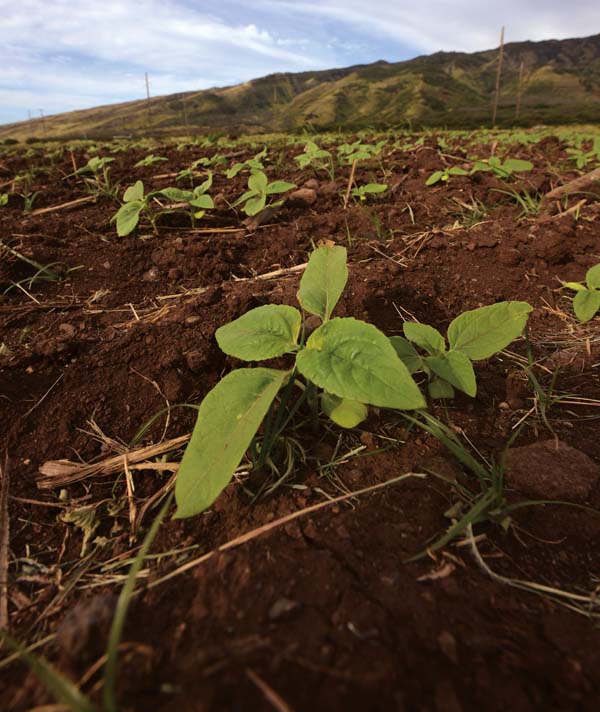 Baby sunflowers are already poking from the ground. The first harvest for the 100-day crop is scheduled for June. The Maui News / MATTHEW THAYER photo

Hirono said she’s familiar with the Kings’ work on Oahu and the Big Island and has worked with them for nearly a decade.

“They’re very committed and focused on enabling Hawaii to wean ourselves away from fossil fuel reliance,” she said. “I support them as much as I can with federal grants, with tax credits and their partnerships with the military. They’re very entrepreneurial. They’re very forward-looking.”

She applauded launching the Maui project with sunflowers, a “very fast-growing crop,” that can produce three yields per year from a single field.

“I think it’s going to be terrific. We just have to figure out how to scale it up,” she said.

But there’s a bigger picture, the senator said.

“I want our country to get away from reliance on fossil fuels because that adds to global warming and climate change,” she said. “This (Donald Trump) administration may not be quite on that page because the president has a lot of people around him who are very much invested in the fossil fuel side of energy production.”

The country’s energy policy should move toward fossil-fuel alternatives and renewable sources of electricity, she said.

The Maui project represents the company’s third phase of experimentation, following its work on Oahu and the Big Island — studying 100-acre plots and determining what crops are most suitable for the central valley.

“What we’re trying to prove here really is the model” for a successful biofuel crop, Bob King said. “We think that with the 100 acres we can actually get hard economics on how much income per acre. . . . You’ve got to start at this before you go to 1,000 acres or 5,000 acres.

“And we’re going to learn all the rest of the pieces to put this economic model together,” he said. “It’s not just energy. It’s oil for food. It’s meal for cattle.”

The fuel will mainly go to Hawaiian Electric Cos., but it will have other uses, Bob King said.

“Our long-term mission is backup fuel for power, biofuel for tractors and agriculture, marine fuel for Young Brothers (interisland shipping barges) and heavy trucks and buses,” he said. “That’s our niche in the 100 percent renewable future.”

The farm property is owned by Waiale 905 Partners, headed by Maui Tropical Plantation owner and developer Mike Atherton and with a mailing address in Manteca, Calif., according to state business registration records.

Pacific Biodiesel has made a commitment to farm nearly 265 acres for at least five to 10 years, beginning with the 115 acres bracketed by Honoapiilani and Kuihelani highways. It will be the state’s largest biofuel crop project, according to the company fact sheet.

Alexander & Baldwin has 36,000 acres of former sugar cane land, but it is not involved in the Pacific Biodiesel project.

Kelly King said her company spoke with A&B about the biofuel crop development. A&B was interested initially, but then there wasn’t much follow-up, she said.

• Sunflower (Helianthus annuus L.) is a crop species domesticated possibly around 1000 BC that originated in North America, one of the few such crops not to come from the fertile crescent of Asia or South or Central America. It was likely a “camp follower” of several western Native American tribes that carried it east and south through North America.

• Spaniards brought it to Europe. In Russia, farmers bred species for their high oil content, increasing it from 28 to nearly 50 percent. The high-oil lines of Russian sunflowers were reintroduced to the United States after World War II.

• Eighty-five percent of North American sunflower seed is grown in North and South Dakota and Minnesota.