Panelist: ‘Food, water and energy must all intersect in agriculture’ 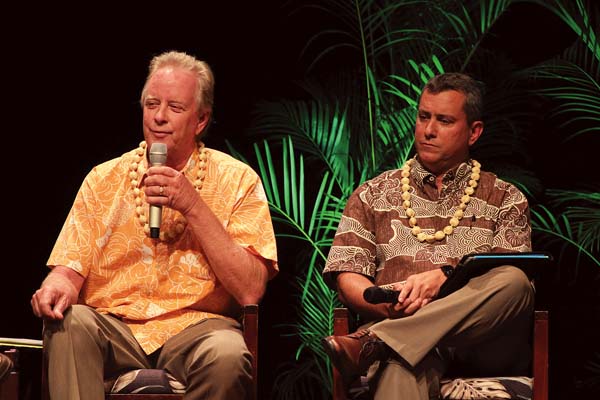 KAHULUI — “Food and energy. It’s always been made out that there’s competition because there’s a finite amount of farmland,” said Rick Volner, general manager of Hawaiian Commercial & Sugar Co.

But, “if you design agricultural systems correctly, they’ll actually complement each other,” Volner said Wednesday at the Maui Energy Conference.

Volner was part of a panel discussing water, food security and energy at the three-day conference, held at the Maui Arts & Cultural Center. The conference, sponsored by the Maui Economic Development Board and the county, began Wednesday and brings together experts on energy and sustainability from across the country.

Food, water and energy must all intersect in agriculture, said Jonathan Koehn, panel moderator and sustainability coordinator for the city of Boulder, Colo. Water is used to produce food. Energy is used to move water and power machinery. However, “lack of coordination and inconsistencies between laws” at the national level mean these three sectors are sometimes out of sync.

“It’s my opinion that the global community is well aware of food, energy and water challenges, but has so far addressed them in isolation,” Koehn said. “If water, energy and food security are to be simultaneously achieved, decision-makers . . . really need to consider the broader influences.” 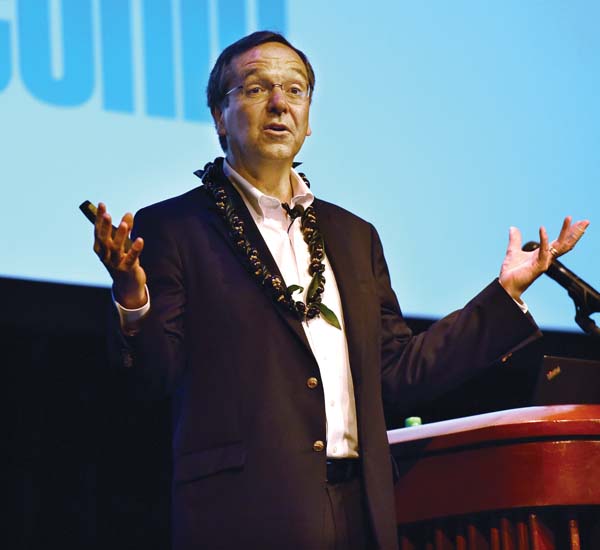 Maui Energy Conference keynote speaker Guillermo Penalosa, founder of 8 80 Cities, presents his vision for what urban communities can do to meet the needs of growing populations and maximize the quality and enjoyment of life for their citizens. He contends cities should not be designed for athletic 30-year-olds, but for 8- and 80-year-olds instead. Walkability, safe bicycle lanes and lots of parks are keystones of his concept — they help promote mobility as well as social well-being. Penalosa pointed to New York City schools that have transformed flat blacktops into vibrant public parks. He showcased cities that have planted more trees, set up bike systems and turned cramped streets into open social spaces. Every place is different, but people’s needs are similar, and Maui can take tips from cities of all sizes, Penalosa said. The Maui News / MATTHEW THAYER photo

On Maui, the reopening of a contested case on stream flows, the closure of HC&S in December and the state’s push toward 100 percent renewable energy by 2045 have all changed the conversation about water, food and energy.

Kyle Datta, general partner with Ulupono Initiative, said part of the disconnect between water, food and energy is due to the fact that “there is no regulatory force like there is in energy to bring these sectors together.” However, he saw the potential for “tremendous synergy” between the three sectors.

“It’s all about byproducts,” said Datta, whose company is a for-profit impact investment firm. “Food needs a lot of heating and cooling. That plays very nicely into the energy system.”

A prime example of this was sugar, Volner said. The sugar-making process also produced molasses and bagasse, the fibrous cane material that helped power the mill. Volner said there are lots of other opportunities for agriculture to boost energy production, and that food and energy don’t have to compete for land space. Some portions of land are better suited for growing food, others for energy production, he said.

But Datta said the question is whether “we have enough land and water to achieve our goals in renewable energy and local food in a sustainable manner.”

Meanwhile, island watersheds are in need of restoration and constant protection, and communities need to decide how much to invest in them, Datta said. He pointed out that electricity customers are used to chipping in a little extra on their monthly bills for efficiency and other system benefit charges. Why not water customers?

Keeping an eye on ground water sources is part of ensuring water security, said Jeff Pearson, deputy director of the state Commission on Water Resource Management. The state places sustainable yield limits to make sure ground water sources aren’t overpumped, he explained. If certain areas get too close to their maximum yields, management of the area is transferred from county to the state.

On Maui, making sure there’s enough water to go around has long been an issue between East Maui farmers and the sugar plantations that diverted the streams from their taro patches. That dispute will return to the forefront in June, when the contested case will be ready for review, according to Pearson.

When it comes to food, water and energy, economist Paul Brewbaker of TZ Economics said he’s “not worried about consumers,” who can go to the supermarket and get fresh strawberries any time of the year. But on the production side, he saw challenges, such as when dairies must produce environmental impact statements and farmers have to get permission from condo owners who’ve built next to their farms.

“If I have to get Maui Tomorrow’s permission to grow something on land that you were already growing something on, I think we’re moving in the wrong direction,” Brewbaker said.

Maui Tomorrow President Albert Perez, who was not on the panel but a conference attendee, responded afterwards that Maui Tomorrow “can’t tell A&B what to grow.”

“We just want them to grow something,” he said. “We want to see sustainable ag without chemicals.”

Volner said HC&S “focused the majority of our time and effort in 2016 in really winding down our sugar operations.” Now it can concentrate on projects like raising cattle, getting local farmers onto former sugar lands and looking at renewable energy opportunities, “whether agricultural-based or more traditional like solar or wind.”

“Really now it’s just putting all of those pieces together and make sure they match up with resources that are available,” he said. “We’re in that phase right now where I expect to see a lot of activity ramping up.”