Saving your skin and the coral reef 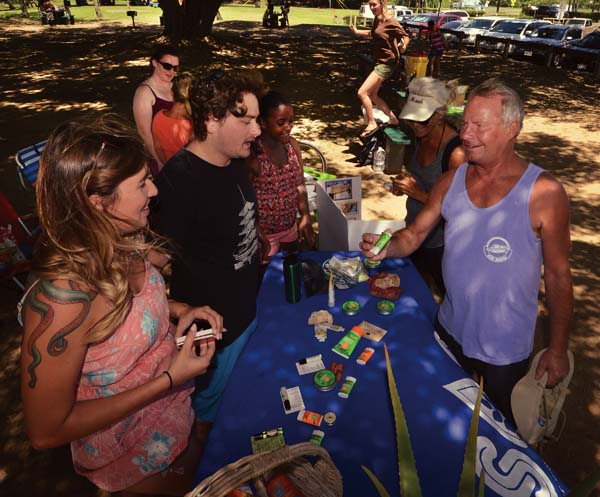 KIHEI–Beachgoers wanting to do their part to help protect coral reefs got some help Saturday from college students at Kamaole Beach Park III.

From a table and display set up at the park before people entered the water, University of Hawaii Maui College students exchanged sunscreen containing coral-killing chemicals for “reef safe” versions.

“We’re just here to spread awareness that chemical sunscreen is harmful to the coral and human health,” said Alicia Wood, president of UH-MC’s Student Ohana for Sustainability. “People have to look for ingredients, not brands.”

Wood said that some popular brands have some products containing chemicals considered harmful to reefs as well as products without the chemicals. 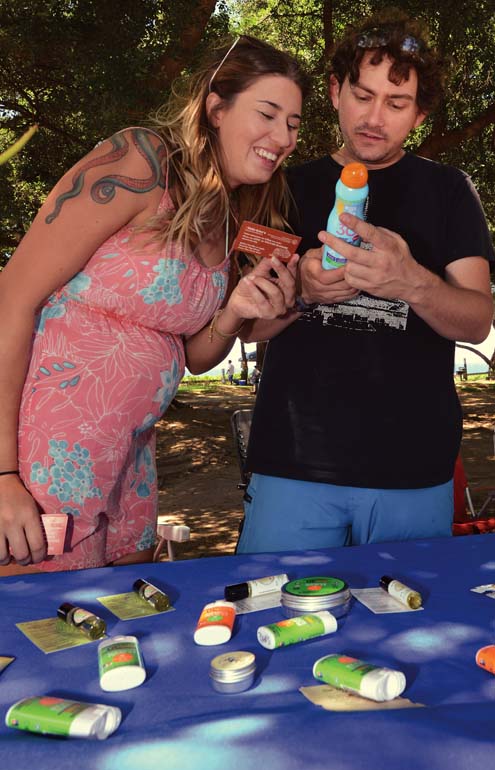 “It gets into reefs and stops reefs from reproducing,” Baldwin said. “It limits the health.”

In addition, while helping absorb the sunscreen into the skin, the chemical can break down during sun exposure and can enter human cells, Baldwin said.

“That’s unacceptable, in my opinion,” he said.

According to the nonprofit EWG environmental research group, oxybenzone can cause allergic skin reactions and may disrupt hormones.

Kihei residents Eric and Rebecca Nelson showed up to learn more Saturday, in part because of concerns about using sunscreen on a toddler they are raising.

“With children, you have to be extra cautious,” Eric Nelson said. “It takes a much smaller level of any chemical to have a substantial effect.”

Rebecca Nelson said that she plans to start using sunscreen more often herself. “But I don’t want to use the wrong kind.”

She ended up trading a spray bottle of sunscreen containing a coral-killing ingredient for a tube of Raw Elements sunscreen.

On Saturday morning, one beachgoer handed Baldwin a container of sunscreen, asking, “Is this harmful?”

“If you can’t pronounce it, don’t put it on,” Baldwin said after reading the ingredients. “It sounds like it’s science fiction.”

He took the man’s container and gave him packets of Raw Elements sunscreen.

After examining the ingredients in a product touted as “the No. 1 dermatologist recommended sunscreen,” Wood found coral-killing chemicals.

“It’s not always as straightforward as it looks,” she said.

She said sunscreen made with zinc and titanium oxide may be more difficult to blend into the skin. “That’s pretty much the only downside,” she said. “I think that’s a small price to pay.”

After about four hours, students had collected a full basket of sunscreen traded in by beachgoers.

Some of the club’s approximately 50 members have submitted testimony supporting state Senate Bill 1150, which would ban the use of sunscreen, sunblock and cosmetics containing oxybenzone or other chemicals harmful to reefs in a marine life conservation district.