‘Our resources are depleting’ 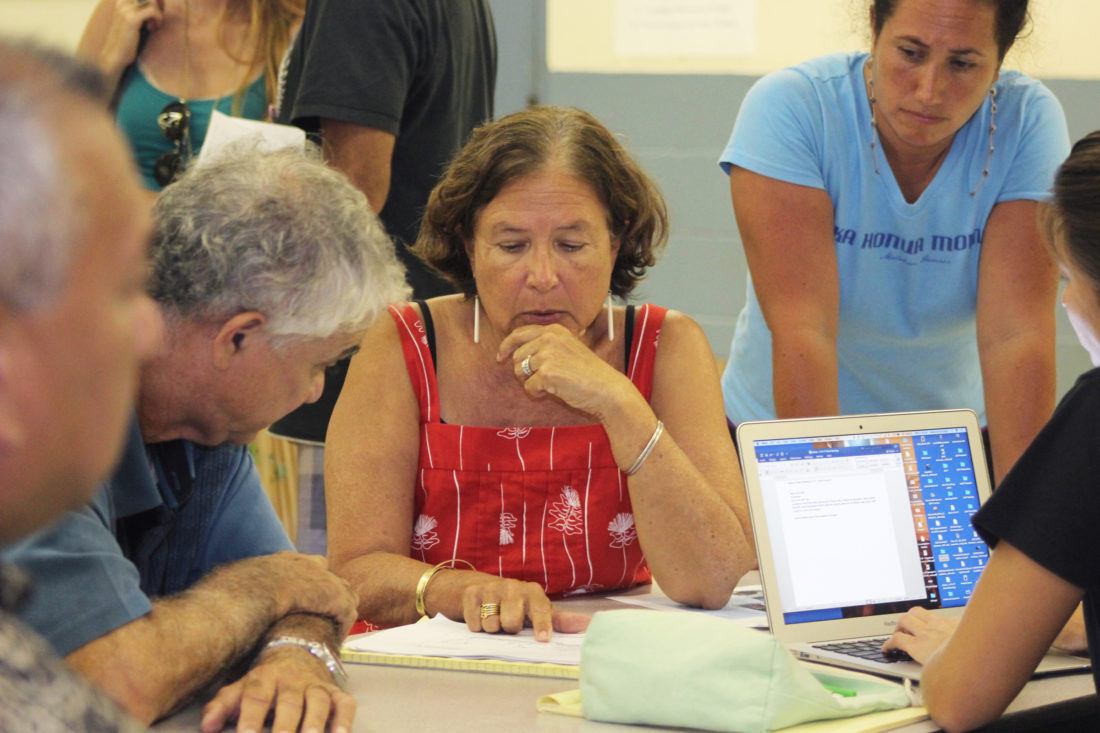 To the youngsters, it may seem like there’s plenty of fish.

“But when you get to see it from a kupuna’s eyes that was there 40 years before us, they can see the depletion of the fish,” Purdy-Avelino said. “What we see might look like plenty to us, but we have nothing to compare it with. . . . If we wait 40 years down the road to realize that the fish and our resources are depleting, it’s going to be too late.”

That’s why families like Purdy-Avelino’s want to see Molokai’s north shore gain protected status sooner than later. For more than 20 years, residents have been monitoring the coastline and pushing for a community-based subsistence fishing area designation from the state.

Having a designation wouldn’t prevent fishing and gathering, but it would put catch restrictions on the most threatened species. 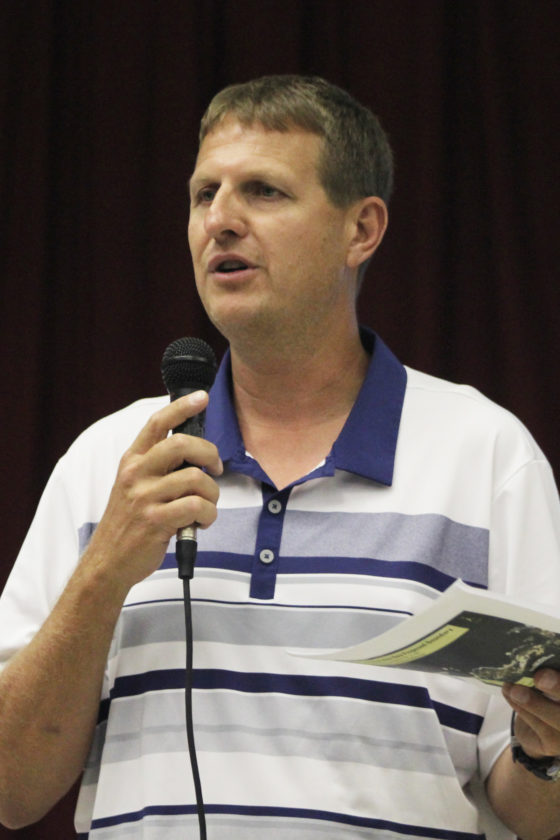 The idea’s been in the works for decades, but after a series of public meetings on Molokai, Oahu and Maui recently, the official rulemaking process can start. On Maui on Wednesday, supporters said the time was ripe for a designation.

“We’re at a critical transition of stewardship,” said Davianna McGregor, a Hoolehua resident and University of Hawaii professor of ethnic studies. “Our kupuna are still well, but we want to be able to pass on and train and have the next generation take on this kuleana. . . . Having the CBSFA will help reinforce the next generation to take on this kuleana.”

In 1993, “old-timers” on Molokai recognized that resources were declining under the pressures of fishing and hunting, McGregor said. Then-Gov. John Waihee put together a task force that surveyed the island and found that 28 percent of all Molokai families’ diets came from subsistence activity, including hunting, fishing and growing food. For Native Hawaiian families, it was 38 percent.

The task force recommended “a new kind of marine-protected area” where people could still fish but would follow sustainable practices, she said.

So the state approved a pilot project from Moomomi to Kawaaloa Bay, and it worked — Moomomi exhibited higher levels of marine life than similar exposed north shore locations around the state. But when residents pushed for a permanent designation, “it just got watered down,” McGregor said.

“So we dropped the idea of going for the CBSFA and instead continued to manage it as a community,” she said.

In 2015, when Kauai became the first island to get its own subsistence fishing area, interest in getting the same for Molokai’s north shore was reignited, McGregor said. In July 2016, the hui submitted its proposal and management plan to the state Department of Land and Natural Resources. The hui resubmitted its proposal after department review, with the latest update in March.

Under the proposal, the designated area would extend from Ilio Point on the island’s northwest tip to Kaholaiki Bay, at the foot of Pelekunu Valley in the east. It would extend out to 1 nautical mile from the shoreline, similar to the early Native Hawaiian fisheries that also placed harvesting restrictions to avoid wiping out resources.

The proposal also would put bag and size limits on species that have seen the most decline over the past few decades: uhu, kumu, kole, moi and ula (spiny lobster). It would also limit the methods of harvesting opihi and limu. Night diving and scuba spearfishing would not be allowed. Neither would commercial fishing, except for akule and ta’ape. (See box for more details.)

In a survey of 60 Hoolehua-Palaau homestead families, 53 expressed support, one family opposed and six families declined to comment, McGregor said.

Support also was widespread amongst attendees at Wednesday’s meeting, including residents who’d flown over from Molokai, but the greatest concern was how the state would enforce the rules.

Former Kaunakakai postmaster Bo Mahoe pointed out how tensions over Molokai fishing grounds came to a head in May 2014 when four Molokai fishermen got into an altercation with a fishing party from Oahu. The men were heralded as heroes by some residents who believed they were just protecting the island’s resources. But that frustration also extends to paddling events where scores of escort boats fish without enforcement, Mahoe said.

Russell Sparks, an aquatic biologist with the DLNR’s Division of Aquatic Resources, acknowledged that the department doesn’t have the resources it needs. The Division of Conservation and Resources Enforcement has one supervisor and two officers on Molokai, but both officer positions need to be filled, department spokeswoman Deborah Ward said. Because Molokai is part of the Maui branch, Maui officers “may occasionally assist in patrolling Molokai waters,” she said.

Each part of the proposed designated area is monitored by a different group, McGregor said, whether it’s community members, the Nature Conservancy or Kalaupapa National Park Service rangers.

Both she and Sparks said that education is a major part of getting people to comply with the rules, though some residents also suggested strict punishments to deter violations.

Opposition at past meetings has stemmed from the fear that rules would infringe on Native Hawaiian gathering rights, or exclude non-Molokai fishermen, officials said. Commercial fishermen also have expressed concerns over restrictions.

But Purdy-Avelino, whose husband is a sustainable fisherman, said that if people take from the ocean, they have to consider how they’re putting resources back.

Poepoe said that “everybody no like rules, but can you be compliant to a simple thing like don’t take too much fish? That’s hard to do.”

The goal is to “guarantee we going get fish for tomorrow.”

“Moomomi is going to be the start,” he said. “Other parts of the island, they coming to me and asking me, ‘Oh, we like designate our place too.’ . . . It’s going to help us tremendously, not necessarily us, the immediate generation, but the generations to come.”

Rules haven’t been written yet, and the proposal still has to go through several levels of public and governmental approvals. To view the current proposal, visit dlnr.hawaii.gov/dar/files/2017/03/Moomomi_CBSFA_Proposal.rev_.pdf.

Comments are due Wednesday and can be emailed to DLNR.Aquatics@hawaii.gov or mailed to Division of Aquatic Resources, 1151 Punchbowl St., Room 330, Honolulu 96813.

Molokai residents are proposing a community-based subsistence fishing area, which would still allow fishing and gathering but put restrictions on certain species. Proposed restrictions would include:

* Opihi (limpet, all varieties). Size limit of 1™-inches shell diameter, ¢-inch meat diameter, if meat only. No taking or possessing while diving.

* Limu (multiple species). Take by hand harvest only and use of scissors is allowed. No taking with holdfast/roots attached.

In Kawa’aloa Bay, swimming, surfing, bodyboarding, snorkeling, diving, operating a vessel or engaging in other in-water recreational activity would be prohibited. Fishing or gathering would not be allowed except for:

* Gathering limu from shoreline from 6 a.m. to 6 p.m. by hand-harvest only.

* Hook-and-line from shoreline from 6 a.m. to 6 p.m. using artificial lures only