Firefighters prepare for their busy season, the first without the help of sugar plantation crews 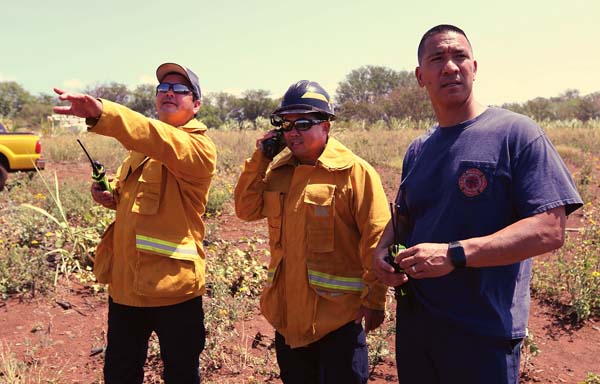 KIHEI — More than 150 firefighters are taking part in one of the biggest training exercises to date in preparation for a busy wildfire season that will — for the first time — be without much of the help of employees of Alexander & Baldwin.

“We’re thankful that we’re still in partnership with them, but we’re concerned,” Assistant Fire Chief David Thyne said Wednesday at the training site in north Kihei. “We want to make sure we stay on top of it because we could potentially be dealing with incidents of a magnitude that we haven’t dealt with before.”

The shutdown of Hawaiian Commercial & Sugar Co. in December drastically decreased the amount of heavy equipment and personnel that respond to cane field fires, putting the burden on the Maui Fire Department to control wildfires across A&B’s 36,000 acres in Central Maui. The company has a minimal amount of heavy-equipment operators, primarily with subsidiary East Maui Irrigation, Thyne said.

“They’ve told us it’s going to be much more delayed than in the past,” he said. “They have a limited amount of resources, so that’s going to leave us with a lot of landscape that’s going to potentially have no resources except ours.”

A&B spokesman Darren Pai acknowledged that the company has less staff and equipment, but is “collaborating very closely with the Fire Department and supporting them as much as we can.” The company is being more proactive by cutting fire lines and ensuring firefighters have access to water sources, he said. 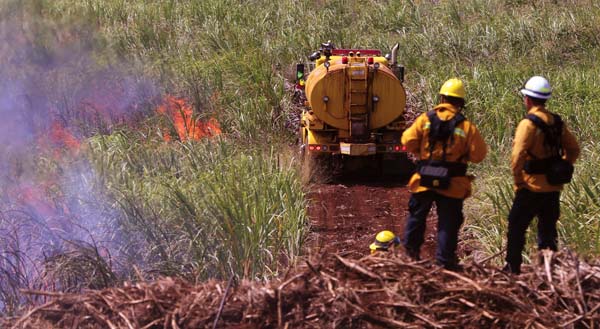 More than 150 firefighters are taking part in the weeklong exercise to prepare for the upcoming fire season that begins in May and goes through September. The Maui News / CHRIS SUGIDONO photo

“We’re doing everything we can to work with the Fire Department to make sure we are prepared to deal with any situations that arise,” Pai said.

The Fire Department used to chase cane fires and tried to extinguish them on its own, but it became too dangerous and inaccessible, Thyne said. HC&S had the equipment, experience and knowledge of the terrain to better handle the fires.

“It became a point where 90 percent or more of our unscheduled cane burns, we’d just call HC&S,” he said. “We’d try to keep it off roads as much as possible and protect homes, but as soon as HC&S got there they’d take care of it.”

Bulldozers are one of the biggest assets for fighting fires because they can cut fire lines in fields to prevent flames from spreading. The Fire Department lacks bulldozers and has relied on A&B, as well as other companies, to supply them.

Fire Chief Jeff Murray has already begun sending letters soliciting heavy-equipment companies to become vendors with the county, like Goodfellow Bros., Thyne said. The county Department of Public Works already assists firefighters, but for private operators there will be issues of liability and availability.

Thyne wondered how quickly heavy-equipment operators would be able to respond, knowing their equipment would probably not be parked in a lot near the cane fields. A bulldozer in Kihei would take two to three hours to transfer to Pulehu Road in Kula, which has been a hotbed for cane fires in recent years, he said.

“It’s not going to be immediate that they be there,” he said. “A lot of times, at the plantation, they were in the vicinity and they would be there within half an hour to 45 minutes. They’d cut a ring around it, they’d get their off-road tankers and spray water around it, and it was basically contained.

“They’d watch it throughout the night, let it burn itself out and harvest it the next few days.”

As a result, firefighters are using the weeklong training that began Tuesday to prepare for this fire season, which roughly begins in May and goes through September. Every fire company is taking part in the exercise, except for Hana because of its remote location. The exercise will help firefighters better understand cane fires and how to handle a mixture of grass and weeds.

“We’re definitely ramping it up this year because of the HC&S closure,” Napili Capt. Brad Ventura said.

The potential for a wildfire this season is larger than it’s been in the past because of a wet winter, Ventura said. The lack of irrigation by A&B will mean the cane fields will grow fallow leaving a lot of “dry fuels” susceptible to catching fire.

“This will be a good year for us to see where our shortfalls are,” he said. “Because we don’t have the resource of HC&S, we’re going to have to lean on Goodfellow and other companies.”

Ventura did not know whether the loss of A&B resources would require more department resources or overtime hours, but he said much of it is determined by weather. Overtime was required for firefighters to battle last summer’s Maalaea brush fire, which was fanned by strong winds and consumed 200 acres.

“Our goal is always to get fires immediately under control to minimize resources and manpower,” he said.

Oahu firefighters are assisted with the training exercise that took place on 48 acres of former sugar cane fields owned by A&B. Ventura said he hopes to hold the weeklong training exercises every spring.

“We’d love to do it every year, but of course it comes down to cost,” he said, likening it to the departments refresher training for CPR and hazardous materials. “It’s a skill we need to possess for the safety of our community.”