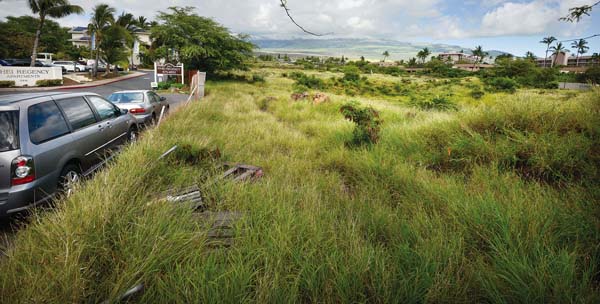 This is the site of the Kamaole Grand, a $90 million, 217-condominium unit project behind the Kamaole Shopping Center along South Kihei Road. This photo was taken Tuesday. The Maui Planning Commission granted a Special Management Area use permit for the project. The Maui News / MATTHEW THAYER photo

WAILUKU — An approximately $90 million, 217-condominium unit project behind the Kamaole Shopping Center along South Kihei Road moved closer to fruition Tuesday as the Maui Planning Commission granted a Special Management Area use permit for the project.

The Kamaole Grand, which will contain seven four-story buildings, a swimming pool, recreation center and barbecue area, sits on 8.39 acres sandwiched by housing and commercial uses and is classified as “infill,” project representatives said. It will consist of one-, two- and three-bedroom units.

Its major access point will be mauka of the project at Liloa Drive, with a makai access at South Kihei Road. The developer of the market-price project is No Ka Oi Development LLC.

At least six testifiers had concerns about traffic and drainage in the area as well as the project’s impact to neighboring properties.

More work will be done on the project’s design before seeking building permits, planning consultant Jordan Hart of Chris Hart & Partners said after the meeting. He said that, under the SMA guidelines, construction will have to commence in three years on the project. 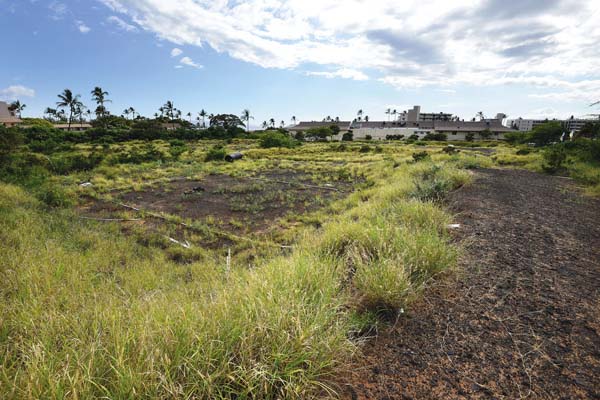 All seven commissioners present at Tuesday’s meeting voted in favor of granting the SMA. The chairperson, Sandra Duvauchelle, does not normally cast a vote unless in tie-breaking situations.

Commissioners did include special conditions for the project, such as prohibiting short-term rentals and requiring electronic monitoring of soil erosion during construction.

Commissioner Lawrence Carnicelli said that, with an SMA project, “we have one bite of the apple” (as the project will not come before the planning commission again) and commissioners want to ensure that things are done correctly.

He said that the condition of no short-term rentals was necessary because, if they were allowed, they “would greatly affect our community.”

In response to concerns about the project’s vinyl fencing that could break down and allow car lights to shine into neighboring bedrooms, Hart said that the developer would look into alternatives, but he could not immediately commit Tuesday to changing the fence.

Testifier Ethel Bellway, president of the Kihei Kai Nani Homeowners Association which borders Kamaole Grand on the Wailea side, suggested there be a wall between the properties rather than the proposed fence. She said that a wall could keep any water runoff in the Kamaole Grand property from spreading to other properties.

Several commissioners had lingering concerns about traffic in the area, and wanted detailed information about drainage designs and grading, which was not immediately available Tuesday.

Testifier Mark Joiner, who lives in the residential community mauka of the project, said that he is concerned about traffic on Liloa Drive. He has children and said that other neighborhoods in the area are full of children who could be impacted by the increase in cars.

Project representatives said that levels of service of nearby intersections would not be greatly impacted by the project and that no traffic mitigation would be needed. Some testifiers suggested turning the South Kihei Road access into an emergency-only access as well as restricting left turns into the project from South Kihei Road.

Project representatives said it would be hard to restrict access to and from South Kihei Road as that entrance is used by other properties and is needed in case of emergencies on Liloa Drive.

Hart said there is a stacking lane to turn left from South Kihei Road into the project.

He said that residents of the project should be the ones to determine their best routes. Studies have shown that 90 percent of the project’s traffic will go through Liloa Drive with about 10 percent taking South Kihei Road, according to the project’s presentation Tuesday.

Kamaole Grand will allow the neighboring Kihei Regency apartments access to Liloa Drive, but there will be gates at the entrances and exits to prevent nonresidential traffic from using the property to travel between Liloa Drive and South Kihei Road, Hart said.

In response to Commissioner Christian Tackett’s concerns about jobs at the project, Hart told commissioners that the developer is looking to hire local union workers for construction.

A petition to intervene on the SMA application was denied. Attorney Tom Pierce had tried to intervene on behalf of The Association of Apartment Owners of The Royal Mauian, which sits across South Kihei Road from the Kamaole Grand site.

Pierce said that his clients are concerned about the increase of traffic in the area as well as drainage and flooding, and that they had standing to intervene because of their proximity to the project.

But the attorney for Kamaole Grand, Craig Nakamura, said that a petition to intervene must show a harm that is different from the community at large, which is not the case for The Royal Mauian residents.