‘We need to do better’ 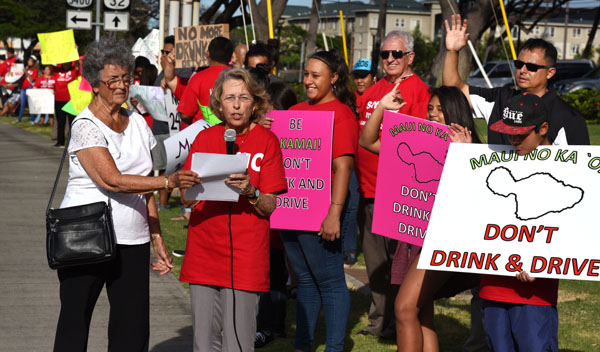 “I’ve seen the accidents and carnage that is done in young people’s lives as well as old people,” said Deacon Stan Franco of Faith Action for Community Equity. “People come and cry on my shoulder as a chaplain when they have a young child — an only child — dying because of a alcohol-related accident.

“We need to do better. We have to get rid of this law. We need to change.”

The group, Coalition to Repeal 24 Hour Alcohol Sales, held signs and shouted out in protest alongside Kaahumanu Avenue. Members wore red T-shirts reading “Say No to 24 hour alcohol sales” on the front, with the phone number for the county Department of Liquor Control printed on the back of the shirts.

Protesters encouraged residents to offer testimony at the beginning of today’s liquor commission meeting at 9 a.m. in the Trask Building in Wailuku. 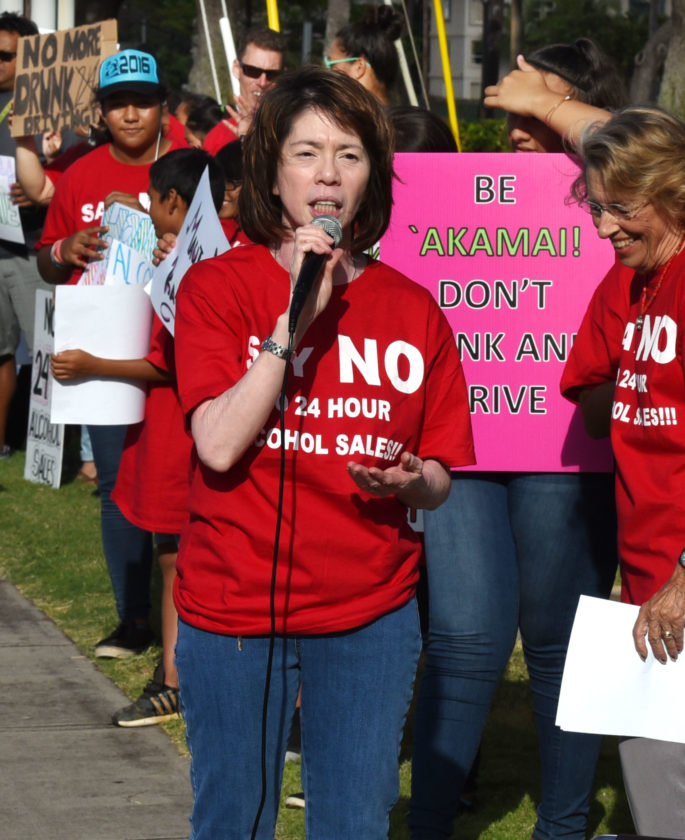 The group formed in the wake of the elimination of the 11 p.m. to 6 a.m. blackout period for retail sales of alcohol in a February vote by the commission. The commission also eliminated the blackout periods for hotels to sell alcohol for activities such as room service (but not bars) and the cap on the number of hostess bars in the county.

Maui police spokesman Lt. Gregg Okamoto issued a written statement for the protest, saying that the department was never contacted for input on the new laws before they were passed. He said police expect to see an increased number of impaired drivers on the road and that the new laws “are not in the best interest of public safety.”

“The availability of alcohol at all hours may not only contribute to the number of intoxicated drivers, but also lead to more underage drinking, domestic violence calls, sexual assaults and related property crimes,” Okamoto said.

The most reported crimes from 11 p.m. to 7 a.m. are domestic violence, disorderly conduct and operating a vehicle under the influence, Okamoto said.

Maui County recorded 24 fatal crashes in 2015, with 45 percent involving at least one driver, pedestrian or bicyclist who had been drinking, Okamoto said. Four of the alcohol-related fatalities occurred between 1 and 6 a.m.

In terms of when drivers were intoxicated, 48 percent were reported between 11 p.m. and 3 a.m. last year, Okamoto said. The majority of incidents occurred in Kahului, Wailuku and Upcountry, followed by Kihei and Lahaina, he said.

Sgt. Eric Correa, representing the State of Hawaii Organization of Police Officers Maui Chapter, said that the union is against the new rules and believes they jeopardize the safety of police officers and the community.

“Alcohol-related incidents are more difficult to deal with because the people are unpredictable,” Correa said. “They require more services from officers because they become unreasonable. With a sober person, you can reason with them and resolve it at a much lower level. When you’re dealing with someone highly intoxicated, it requires more intervention and occupies our time for one person.”

Lt. Gov. Shan Tsutsui also issued a statement in strong support of repealing the new 24/7 law, saying it poses a “serious threat to the health and safety of our community.” He said that prior restrictions actively helped reduce alcohol incidents and made Maui a safe place for residents and visitors.

“The safety and well-being of the community should be our primary objective when making changes to the law,” Tsutsui said. “In order to preserve Maui’s unique tight-knit family environment, I believe it’s necessary to reinstate the liquor sales restrictions.”

Carol McNamee, founder of Mothers Against Drunk Driving Hawaii, traveled from Oahu to attend Tuesday’s protest and was joined by longtime Maui representative Leanne Stodd. The women have supported victims of drunken driving and related incidents for the past 30 years.

“There is solid research showing that increasing the hours of alcohol availability in the community will ultimately increase impaired driving crashes, injuries and fatalities,” McNamee said. “How much research did the liquor commission do before deciding to put this issue on their agenda? I know the people of Maui want to see efforts to increase highway safety continued.

“This baffling decision by the liquor commission sends a confusing message to the community and also compromises its safety,” she said.

“We have an epidemic on Maui, and it’s hitting close to the people trying to rebuild their lives and reunify with their children,” Jamal said. “It’s real because if you have access to alcohol, you have access to more crime. I see it all the time. I sponsor women, and it’s really, really sad.”

Jamal said that her practice would be to “self-medicate” or “check-out,” and if she knew alcohol was available 24/7 “it would help me kill myself.” Now sober for two years, she is helping others deal with their addiction, but has seen a disturbing trend toward alcohol use among younger people.

“It’s 19-year-olds who started drinking when they were 12,” she said. “Your adolescence are just shot.”

Momi Medeiros, supervisor of youth services at Maui Family Support Center, said many studies have shown a link between an early onset of drinking and an increased likelihood of problem drinking later in life. She added that youth who drink and drive are more often involved in car crashes.

“Making alcohol sales available 24/7 does nothing to help remedy this,” Medeiros said.

Karl Kiyokawa, Pacific regional director for TriWest Healthcare Alliance, explains how the Department of Veterans Affairs and TriWest are working to solve issues with the Veterans Choice Program during a town hall meeting at the Maui Arts & Cultural Center on Tuesday. * The Maui News MATTHEW THAYER photo