A 23,000-square-foot trampoline park plans to open in the former Maui Film Studio in the Maui Lani Village Center in July or August. The Maui News / CHRIS SUGIDONO photo

The former Maui Film Studios will be converted into a 23,000-square-foot trampoline park to open in July or August in the Maui Lani Village Center, the park’s owner said Tuesday.

Ultimate Air LLC began leasing the soundstage building this month and is in the final stages of architectural planning and permitting, said John Caubble, co-owner of the Arkansas-based company. In January, the company announced its plans to open on the Valley Isle and said it was looking at a couple of locations.

“This has always been one of the most preferred locations and on the tip of my list,” Caubble said. “It’s very central to the whole island. It’s not super crowded, and it’s easy to get in and out of.”

About 12,000 square feet of trampoline equipment will be shipped from the Mainland and installed at the park, which includes basketball hoops, dodgeball courts and foam pits, Caubble said. He said that the rest of the building will have offices, private event rooms, restrooms, concessions and an open lounge area with couches, chairs and benches.

Caubble said he has targeted July 1 as an opening date, but it may extend into August. 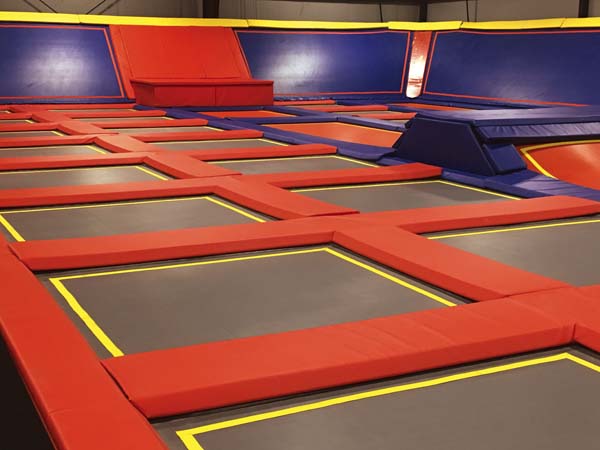 “I would love to do it before the start of school so kids can at least get a taste of it,” he said.

The company announced its plans to move into the former film studio at 21 La’a St. on social media last week. The post had about 900 likes and more than 150 comments on Facebook on Tuesday.

“We’ve got a ton of really good feedback from our Facebook page,” Caubble said. “I think we’ve reached over 53,000 people from just that one little post, so we’re excited about that.”

The company plans to have a booth at the May 13 job fair at Queen Ka’ahumanu Center, Caubble said. The company hopes to hire 50 to 70 part-time workers and several full-time employees.

“Last week, people voluntarily went on our website where there’s an employment application already there,” he said. “We received 10 applications just over the weekend, and just on paper, there’s some great applicants so I’m excited. I’m thrilled about getting to hire and work with a lot of great people.”

A unique feature that the Maui park plans to install is performance wall trampolines that will test gymnasts and parkour athletes. Athletes will have the option to jump off two walls — an 8-to-10-footer and a 15-footer — and land on a trampoline that will send them flying back up toward the top of the wall. The wall will be open only to experienced athletes and will be supervised by a coach.

There also will be a designated space for toddlers, with a kiddie slam dunk and foam pits.

Caubble said that he is working with a graphic designer and a local wood company to design the furniture and greenery outside and inside the park. He said that the look and feel of the park will be true to Maui, with a tropical theme.

News of the trampoline park taking over the former film studio officially ended any chances of the soundstage hosting future television or movie productions.

Once billed as the largest studio in the state, the failed venture had been embroiled in its own drama.

The studio opened in 2013 under Socrates Buenger and had lined up several film and TV projects. One of them was “Ethyrea: Code of the Brethren,” which was lauded as a blockbuster action, adventure and fantasy film series that would have been the biggest production the island has ever seen.

The movie and several others never materialized, and Buenger ran into financial issues. Embree Investment Partners I LLC sued Buenger, Maui Film Studios, Hawaii Productions Group and Aloha Film Studios for breach of contract in July 2014. In October, 2nd Circuit Judge Rhonda Loo granted a summary judgment in favor of the plaintiff for $236,000 in unpaid loans from Maui Film Studios.

Court documents show that Jerald Embree, manager of Embree Investment, was a business partner and co-manager with Buenger in Maui Film Studios. According to property tax records, the former film studio, a 103,520-square-foot warehouse, is owned by Paradise Beverages.

Cinelease, described by its website as the largest independent motion picture equipment rental provider in North America, took over operations at the film studio in 2015 and lined up projects running into 2016. A TV show and unnamed feature film did not gain traction, and it is unclear what the status is of a feature film starring George Lopez as “Chris Cringle.” Production on the film “Aloha Santa” was supposed to begin Dec. 6.

Maui County Film Commissioner Tracy Bennett said that Cinelease moved its equipment out of the facility about a year ago and that most of what remains inside is owned by actor Branscombe Richmond’s company. Bennett said that the studio had not booked any films or productions in about a year.

“Obviously, we would’ve loved to have something booked in that studio, but the majority of projects that come to Hawaii are here for the exterior locations,” he said. “Being a warehouse, it wasn’t really the ideal location to do stage work. The company tried it, but I’m not privy to the details of what happened to it.”

The studio also gained notoriety as the source of a conflict involving Mayor Alan Arakawa and his administration; Hollywood movie mogul Ryan Kavanaugh, who was attempting to build his own movie studio; and former Maui County Film Commissioner Harry Donenfeld, who was eventually fired in September 2013. Based on a taped conversation with Donenfeld and Arakawa officials, Kavanaugh appeared to have been was caught by surprise by the fledging film studio, which he felt would hurt his efforts at lobbying the state Legislature for a movie tax credit.

Caubble said that the interior of the former studio is “super, super, clean and ready to go” but has about six or seven RVs filled with film equipment that need to be relocated. He said that construction of the trampoline park should take no longer than three weeks.

Bennett said that he has seen early plans by a developer who is looking near the Maui Research & Technology Park in Kihei to build a film studio, media center, theater and long-term housing. He said he did not have any details on the project or who is involved.

“I’ve seen some of the plans and it looks pretty amazing, but I don’t know what the progress is right now,” he said. “I have to concentrate on our plethora of commercials, reality shows and other shoots. That’s where our bread and butter is right now.

“But if someone wants to open a film studio or soundstage, I’m more than happy to meet with them about it.”

For more information about the trampoline park, see Ultimate Air’s website at goultimateair.com.