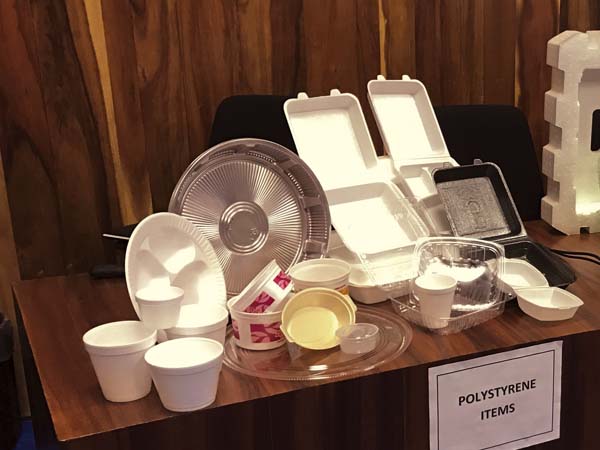 Maui County Council members are reviewing a bill to ban disposable polystyrene food containers in Maui County like the ones shown. This display was put up Monday in Council Chambers. The Maui News / MELISSA TANJI photo

WAILUKU — The majority of the 36 people who testified at Monday’s County Council meeting favored the ban on the sale and use of polystyrene containers, a staple of takeout food eateries, that is a step away from being approved.

They told council members that the measure is an important first step in saving the environment and keeping the polystyrene containers from being ingested by marine animals and birds, which could be fatal to them. The bill notes that polystyrene is a suspected human carcinogen.

“We have learned from and seen firsthand the success of our plastic bag bill,” said Lauren Blickley, referring to the county ban on those shopping bags. “We’ve seen these types of bills work. It does go hand and hand with education.”

Opponents of the bill told the council that even compostable and environmentally friendly alternatives will end up in the landfill, as do polystyrene containers, because the county lacks the equipment to recycle the containers. Some testifiers said that the majority of the litter in the ocean is plastic and not polystyrene.

“Passing the styrene ban is not sustainable,” said Marilyn Jorgensen of CJ’s Deli & Diner in Kaanapali. “All the economic burden is going to be placed on the food service industry.”

She said the cost of alternative containers was three times higher than polystyrene.

After hearing from the testifiers and four experts on the issue, the council recessed and is expected to act today on the bill, which is up for its final vote before heading to Mayor Alan Arakawa’s desk. The council will reconvene at 9:30 a.m. in Council Chambers in the Kalana O Maui building.

There are exceptions to the ban. Butchered meats, poultry, fish and eggs may be put in polystyrene containers, though sashimi and poke would not be allowed to be packaged that way.

Polystyrene foam coolers and ice chests, foam blocks and packing peanuts used as protective packaging during shipping are exempt from the ban. And the director of the county’s Environmental Management Department may grant exemptions where there are no reasonable alternatives to polystyrene food containers or where complying with the ordinance will create a hardship.

Those not in compliance could face civil penalties of up to $1,000 a day.

Joy Gold, consultant for Oahu-based KYD Yamada Distributors, which distributes food service containers, said that the top items found in the ocean are plastic bottle caps, drink stirrers and plastic bags; polystyrene is not high on the list.

Singling out the food-grade polystyrene “does little to reduce litter,” she said.

Council Member Yuki Lei Sugimura pointed to a chart presented by expert Cheryl King of Sharktastics, an organization that aims to curb and study marine debris. The chart showed that out of 40 marine debris cleanups at Kaehu Bay in Wailuku from 2012 to this year, plastics were 78 percent of the items collected, while polystyrene and foam were at 9 percent.

King agreed, saying that polystyrene was not the main marine debris but that the ban still had benefits.

“What this bill does most, it creates a ripple effect,” she said. “It may take only some of our debris, probably by 10 percent. (But) it’s a huge start that will create a movement far more outreaching.”

Lynn Dyer, president of the Foodservice Packaging Institute, the trade association for the North American foodservice packaging industry, said that Maui does not have the services to recycle the alternative container material. It will end up in the landfill and not impact the amount of litter.

Dyer, who spoke to the council by internet from the Mainland, cited the example of San Francisco, which enacted a polystyrene and styrofoam ban in 2008. The percentage of foam cups as litter declined 31 percent while paper cup litter rose 32 percent the year after the ban took effect.

“It’s about the behavior. Somebody is going to litter, no matter what the material is,” Dyer said.

Blickley, who is part of the Maui Nui Marine Resource Council but was testifying as an individual, complained about lobbyists and the plastics industry “shifting the blame” to people, away from the product. She said polystyrene never breaks down.

It stays in the systems of wildlife, said Megan Lamson, marine biologist at the Hawai’i Wildlife Fund. She pointed to a study that showed how European perch that ingested microplastic polystyrene particles had reductions in their ability to smell. This left them more vulnerable to predators.

Polystyrene could inhibit hatching, decrease growth rate and alter feeding preferences and behaviors of the the perch larvae, she said.