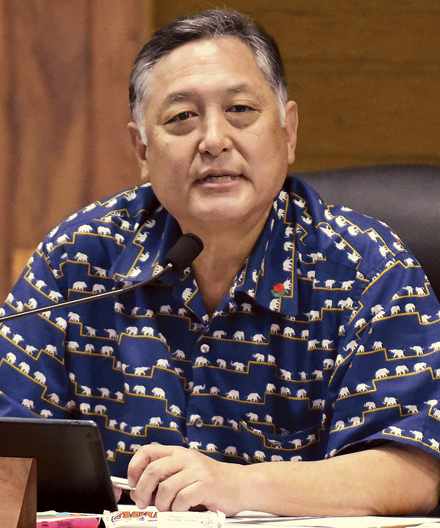 The Maui County Council gave its final approval Tuesday to the county’s $705.2 million fiscal 2018 budget, which will include slightly higher motor vehicle weight taxes to pay for more roadway improvement projects, which the community asked for, council members said.

Members voted 8-0 to pass the budget, with Council Member Kelly King absent and excused. Overall, the budget is nearly $46 million more than the current fiscal year budget of $659.5 million.

The budget heads to Mayor Alan Arakawa’s desk. He could sign it, veto it or allow it to become law without his signature. Arakawa could not be reached immediately for comment Tuesday.

The spending plan is scheduled to take effect July 1.

The vehicle weight tax hikes are expected to generate $1.79 million in six months for the highway fund to finance roadway improvement projects. A community survey done by the council’s Budget and Finance Committee found that most people wanted better roads as a top spending priority.

The budget removes the Waiehu Municipal Golf Course from the chopping block. Arakawa put it there during his annual State of the County speech in March. He said he was mulling the golf course’s closure because it lost $16.3 million in the past decade.

“For me, (some) say it’s a waste of money,” Hokama said of those who may want to see the closure. But he added that the county spends millions maintaining other county facilities such as swimming pools and playing fields.

Hokama called Waiehu a “gem,” but he added that improvements are needed.

“I’m willing to give our employees, the community (a chance) to make it work,” he said.

In the “Chair’s 3 Minutes” column in The Maui News on Sunday, Council Chairman Mike White said changes are scheduled to be made so tee times can be booked online and credit card payments can be accepted.

Those included $200,000 more for the Upcountry skate park and $900,000 for the Department of Water Supply to expedite the Upcountry water meter list.

Sugimura added that she has received many emails from employees about parking fees increasing around the county building area, but she said that overall the council is dedicating more funds to employees’ retirement and other expenses.

While Hokama applauded residents for their willingness to pay more to receive more services, he took issue again with the state Legislature.

White noted that in Hawaii, what the counties receive from hotel tax revenue is well below those of other states.

The budget includes some fee increases. Those include higher monthly trash fees for Maui and Molokai, from $24 to $27, and from $12 to $14 on Lanai. There will be a $3-per-vehicle fee for residential trash dumping at the Central Maui Landfill. Commercial tipping fees would rise from $81 to $90 per ton.

While water fees remained unchanged, sewer fees are set to increase from $29.20 to $30.08 per month for single-family and duplex dwellings.

• Melissa Tanji can be reached at mtanji@mauinews.com.