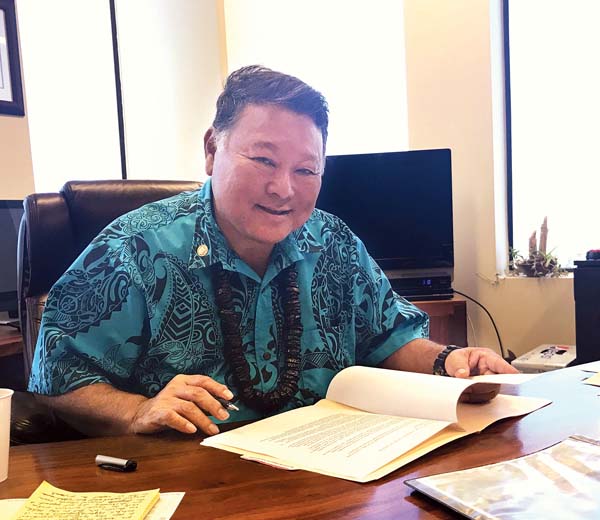 WAILUKU — Maui County Mayor Alan Arakawa, who cannot run for re-election due to term limits, said Friday that he intends to seek the lieutenant governor’s seat in 2018.

He made the announcement Friday morning on the “Hawaii News Now Sunrise” TV news program on Oahu and Friday afternoon confirmed the news in an interview in his county building office on the ninth floor. He said that his television announcement was the “first firm commitment” he’s made in public.

“In my research, I cannot find one state department that is operating at the efficiency level it should be,” said Arakawa, who will complete his 12 years as mayor — the last eight consecutively — next year. “I do not see any direction where . . . the current administration is saying, ‘This is what we need to do to correct the situation in each of the departments,’ “ Arakawa said. “We are kind of aimlessly floundering around. There are many, many critical issues facing the entire state.”

He cited the homeless situation and state hospitals that need to be financed properly and run efficiently.

Arakawa said he has been asked by more than 1,000 people to run for higher office, mostly for governor. He served as mayor from 2003 to 2007 and was elected again in 2010. He won re-election in 2014 and cannot seek another term due to term limits.

The mayor said that his bid for lieutenant governor is not about popularity or gaining higher office, but to fill a leadership shortage. He said he would be happy retiring to his farm, “but there are very few leaders in the state right now that can man the top positions and be considered leaders.”

“This is not about personality, this is about efficiency,” Arakawa added.

The incumbent lieutenant governor is Shan Tsutsui, a former state senator from Maui and former Senate president who could seek a second term. In April, Tsutsui told The Maui News that he’s “pretty certain” that he will not seek re-election as lieutenant governor. The Wailuku resident and Maui High graduate said he is thinking about running for Maui County mayor in 2018.

Tsutsui could not be immediately reached for comment Friday afternoon.

As for what Arakawa thinks of his chances for the state’s second-highest office, the mayor said: “I think the electorate will decide that.”

Dick Mayer, a retired Maui Community College professor who has moderated numerous county candidate debates during election season, said he was not surprised by Arakawa’s announcement, noting that the rumor had been circulating. Arakawa probably didn’t want to leave his run in the rumor stage, he said.

“This gives him the ability to go around the state to give talks,” Mayer said.

Arakawa appears to be following the path of former Maui County Mayor Linda Lingle, who became governor on her second try, Mayer said. Lingle was Hawaii’s governor from 2002 to 2010; she served as Maui County mayor from 1991 to 1999.

Arakawa has not had to declare a party affiliation in his runs for mayor because the race is nonpartisan. Though he ran as a Republican for Maui County Council, Arakawa said he will run as a Democrat in 2018.

“I think Alan Arakawa is not nearly as powerful now as mayor as he was when he was first elected and even the second term,” Mayer said. “This is his third term now.”

Mayer said he believes Arakawa’s position on the genetically modified organisms moratorium “turned a lot of people against him.”

Arakawa’s administration has fought the voter-approved moratorium in court on the grounds that the law, as written, had flaws and that the county cannot override existing state and federal laws regarding GMO crops. The courts generally have sided with the mayor.

Mayer said Arakawa also has not turned out affordable housing projects needed by the community and has failed on a campaign promise to make headway on the Upcountry water meter list. The issuance of new water meters has been restricted due to water shortages and droughts Upcountry; the priority list was created to issue new meters as new water becomes available.

As of Nov. 30, there were 1,770 building permit applications, subdivisions and water service requests on the priority list.