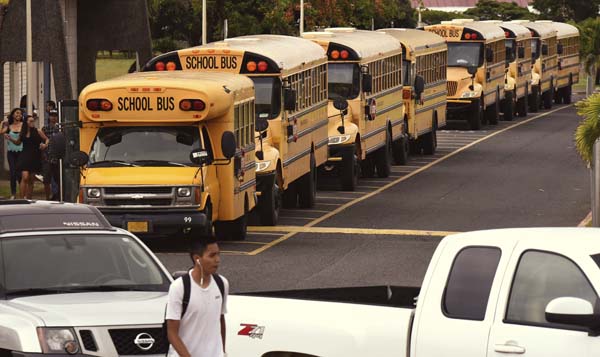 School buses are lined up in front of Maui High School at the end of classes Tuesday afternoon. A new bus company, Ground Transport, will be providing bus service for these students next school year. The Maui News / MATTHEW THAYER photo

Two bus companies — one new to the island — will be transporting public school students in Maui’s largest complexes beginning next school year.

Ground Transport Inc., which has been busing students on Oahu for 26 years, received the contract to provide transportation for students in the Baldwin, Maui High and Lahainaluna complexes, the state Department of Education announced Monday. (Complexes include the high school and all feeder schools.)

The contracts actually were awarded in November under a request for proposal competitive bidding process, said Louis Gomes, president and CEO of Ground Transport, on Wednesday. The contracts are for seven years with the possibility of three one-year extensions by mutual agreement, said Department of Education spokeswoman Lindsay Chambers.

There were four proposals for services on Maui, and all were “local” companies, she said.

“The pricing data has not been finalized yet,” Chambers responded when asked about the cost of the contracts.

DOE officials said the cost of bus service for regular and special education students on a traditional school calender on Maui will be $9.1 million for the 2017-18 school year. That is less than the $9.3 million for the current school year that is coming to an end this week.

The awarding of the Maui and Kauai contracts completed the department’s Get on Board initiative, which grew out of a near doubling of transportation expenditures over the three years prior to the 2012-13 school year, the department said in information provided to prospective bidders. The state Legislature reduced student transportation funding to control the growth in costs and to force the department to determine the reasons for the increases.

In June 2012, the department eliminated 100 bus routes due to the rising costs and loss of funding. Get on Board, launched to resolve the cost problems, began with a pilot project in the 2013-14 school year and restored some of the lost routes, the department said.

The program has reduced overall transportation costs by more than $13 million annually, the department said.

The Get on Board initiative streamlined processes and upgraded technology, including requiring two-way radios and video cameras on buses as well as GPS devices coupled with computer systems that allow the company and department to automatically route and track buses. This technology was not required in older contracts.

He also said that the RFP process requires more accountability from bus companies, which ultimately raises the level of safety of companies transporting thousands of students every school day.

“The process is very good,” he said.

Get on Board gave Ground Transport an opportunity to bid on the Maui routes.

“We wanted to give the community, the taxpayers, the Department of Education another option, another contractor to put in the bid,” Gomes said. “We wanted to expand out.

“We thought we’d give it a try on Maui.”

Although Ground Transport is new to Maui, the company has been busing public school students for the last 26 years, currently in Central and Leeward Oahu, Gomes said.

“We are new to the island, but we are a local, kamaaina company,” he said.

Ground Transport will have 80 school buses, which includes spares, on Maui at any given time, most of them new, Gomes said. He said that running a school bus company “is not cheap” and that the company is bringing in “millions of dollars of equipment” in the new buses.

Some of the buses are already on island at the company baseyard in the Central Maui Baseyard; company offices are in Kahului, he said. A site for a Lahaina baseyard has been identified, and the company is currently in negotiations.

Ground Transport will be employing between 100 and 110 workers from drivers with a commercial driver’s license to office staff and management, he said. Like the rest of the country, there is a shortage of qualified bus drivers, Gomes said. Some drivers from the previous contract holder have reached out to Ground Transport, he added.

With the exception of a small six-bus contract held by Akina Bus Service in Kihei, Robert’s Hawaii currently holds the contract for the balance of transportation services on Maui, Chambers said.

Officials with Robert’s Hawaii could not be reached for comment Wednesday afternoon.

As for other complexes in Maui County, Hana High & Elementary School is currently running a pilot program in which the school furnishes the home-school-home services for the Hana community, Chambers said. The school receives financial and technical support for the program.

Lanai does not have bus service because all residents live within a mile of the school campus. Molokai has been under the Get On Board program since the 2015-16 school year, and contractors are Molokai Transportation Associates, Spencer’s Bus Service and Dudoit’s Bus Service, she said.

The one-way fare is $1.25 per ride, though prepaid quarterly and annual bus passes are discounted and can cost as little as 80 cents per ride, Chambers said.

Parents can sign up for transportation by obtaining a 2017-18 School Bus Handbook from their child’s school or online at www.hawaiipublicschools.org/DOE%20Forms/Transportation/2017-18%20SchoolBus%20Handbook.pdf.